Braxted Reservoir 'Singing From The Fields'

As I sit typing this blog it's very clear that summer has well and truly left us. Out the window a miserable amount of cloud fills the sky and the rain is launching a brave assault on my windows. I know this is great fishing weather and as usual I will be braving the banks through both Autumn and Winter, it's my favourite time to be out there. Today though, I thought I'd escape for a while and recall a successful session I had on the Braxted reservoir a month or so ago.

There were two things that very much stuck in my mind about this session, not only did I bank a 28IB 5oz common but the weather was incredible. It was one of those days where there were very few clouds in the sky, it was almost as if they ceased to exist. There were a thousand shades of blue and the breeze was constant and warm. Sprawling behind me was an ocean of corn fields and with each gust of wind came a strange, ghostly serenade as the stems shifted back and forth with military timing, I was in the heart of nature and I was loving it. On days like this it's so easy to experience pure clarity and being on the bank is both an honor and a privilege. It goes to show that angling intertwines so much more than just going and catching fish, if you focus too much on the numbers you'll miss all that is around you.

The Corn Fields Sang Behind Me 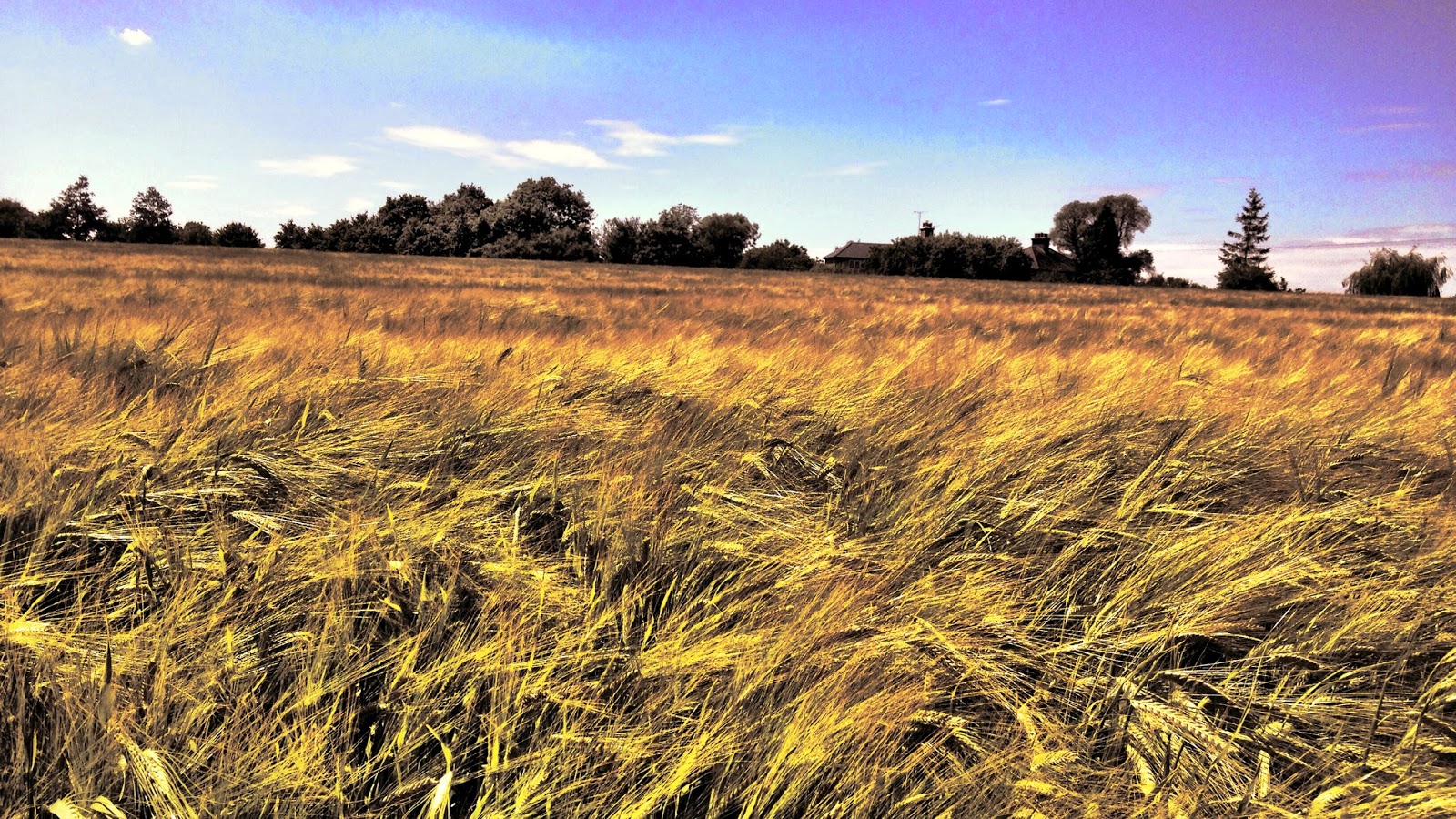 Having targeted the dam wall on my previous sessions, I decided that I'd like to explore more of the water. When I arrived, there was a tempting swim available that gave me a few good looking spots on the other end of the dam to where I'd previously fished. I must admit that this was tempting but I abstained the urge to fish it and made my way up towards the centre of the water.

I started to think that if I was a big carp I might feel inclined to stray away from the crowds and lurk quietly under a tree or in an unassuming spot. With this in mind I decided to fish a swim half way up the left bank, free from any marginal features. I wasn't going to fish very far out, I wanted to see if I could pick a couple off as they made their way along the margin. After having a lead around it was shallow close in and then gently sloped down, I wanted to target the water at about 4ft.


View From The Moon 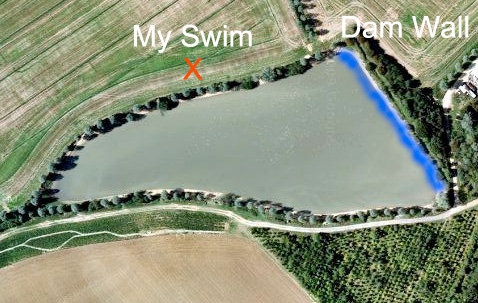 I was going to stick to the bait I'd used in previous sessions, the coconut fish combined with the halibut & coconut seemed to work very well. This time around I wanted to work with a black and white combination, I wanted a presentation that had the feel of what the old humbug sweets looked like. I am growing weary of tipping my baits with yellow, I think it's being done to death nowadays and I am sure some of the bigger, wiser carp are starting to suss this out. 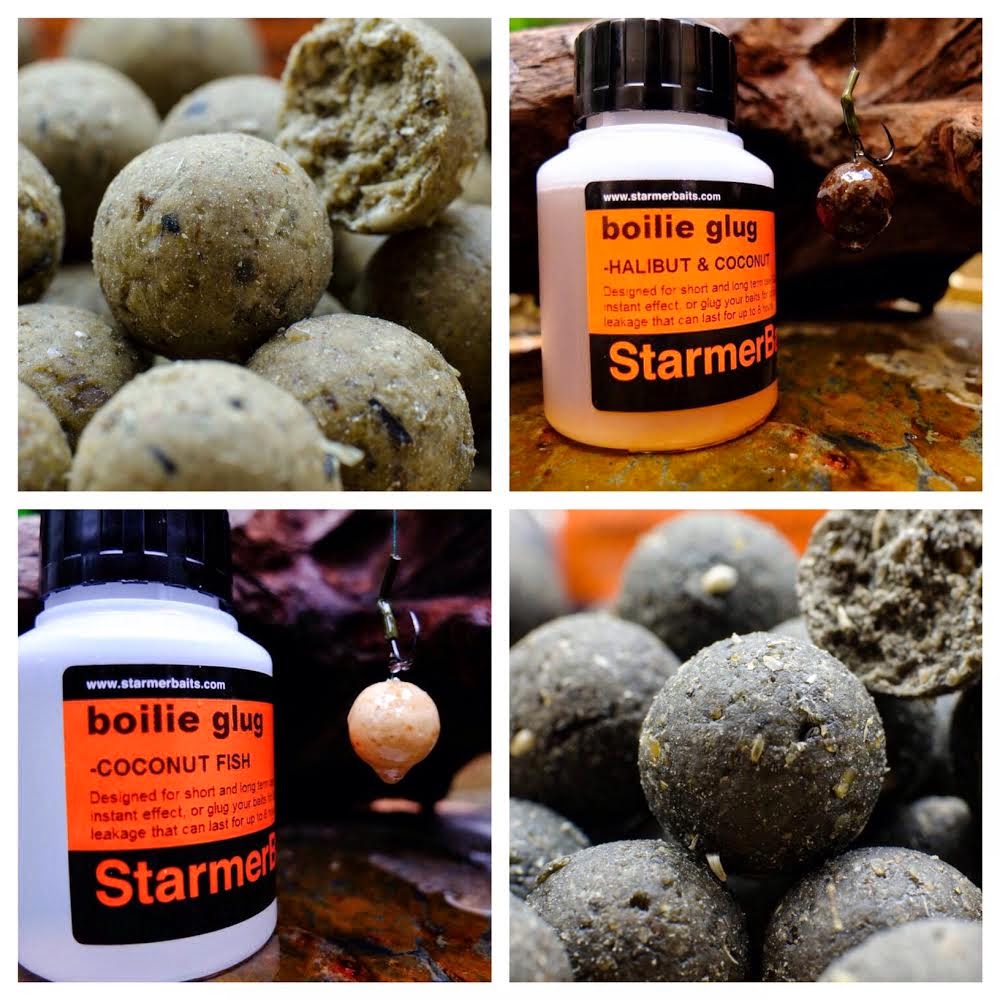 I was fishing two bottom baits both on semi-fixed rigs, my lead was 2.75oz, I was using a combi rig which consisted of Kryston 'SYNX' and Nash 'Trigger-Link'. I feel the Trigga-Link is a painfully under used item, for those that don't know, once it comes in contact with water it turns elasticated with a spring like quality. I believe this makes it harder for the carp to use the lead to drop the hook, every lunge and head shake is cushioned due to the elasticity of the 'Trigga-Link', I have had great success with this rig.

On my left rod I had Coconut Fish, I didn't top this off with anything, on my right rod, the Coconut & Halibut was topped off with white corn, this gave a great black & white combination and I felt it was a mix of colors that the carp just wouldn't be able to resist.

I decided I was going to bait up heavily in a triangular shape, fishing one bait in the centre of the free offerings and the other bait a good half rods length off from the main concentration of bait. I was interested to see which bait pulled the better fish, I still believe on pressured waters the big fish opt for the 'mouthful' approach and I don't believe they just hoover up everything they come across. I think it's far more complicated than that, I am wanting to create a presentation that has a very 'nonuniform' feel about it. 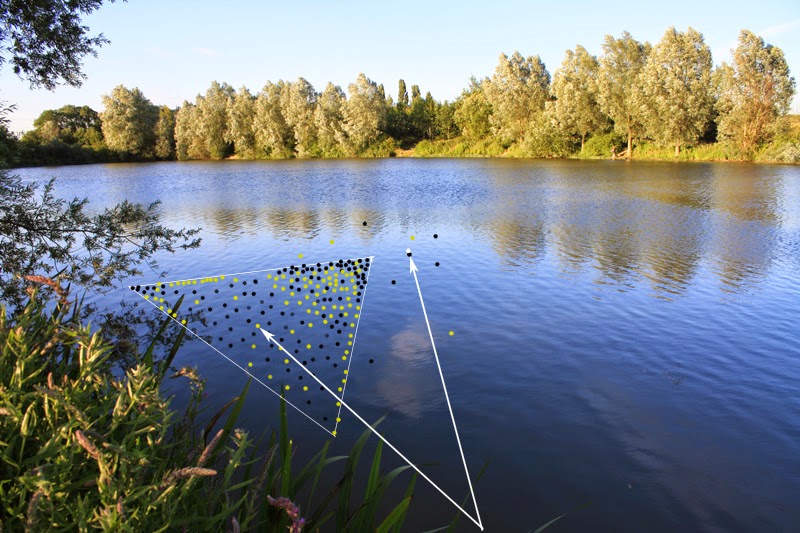 I got both my rods out by mid morning, baited up nice and tidy and sat back in anticipation to see if my 'hunch' about the margins was going to pay off. Periodically I would add a few baits to the swim, I feel that the carp move around a lot and at some point should come across my zone. A few coffees later and a little doze, the rods remained static, instead of re-baiting and recasting I decided to sit it out. I know the bait works and I knew my presentation was spot on.

It was about 2:30pm when I got my first pick up, the left hand rod was alive and that awesomely addictive sound of my bite alarm had me scrabbling for the rod. As I lent into the fish it was kiting like crazy and I held on for dear life trying to cushion the onslaught. Finally tiring I caught a glimpse of a long, lean common, I was buzzing, eager to look at my prize, she was a beauty, I weighted her fast, 15IB on the noise, a few quick pictures were in order and then I slipped her back.

15IB Common On The Coconut Fish 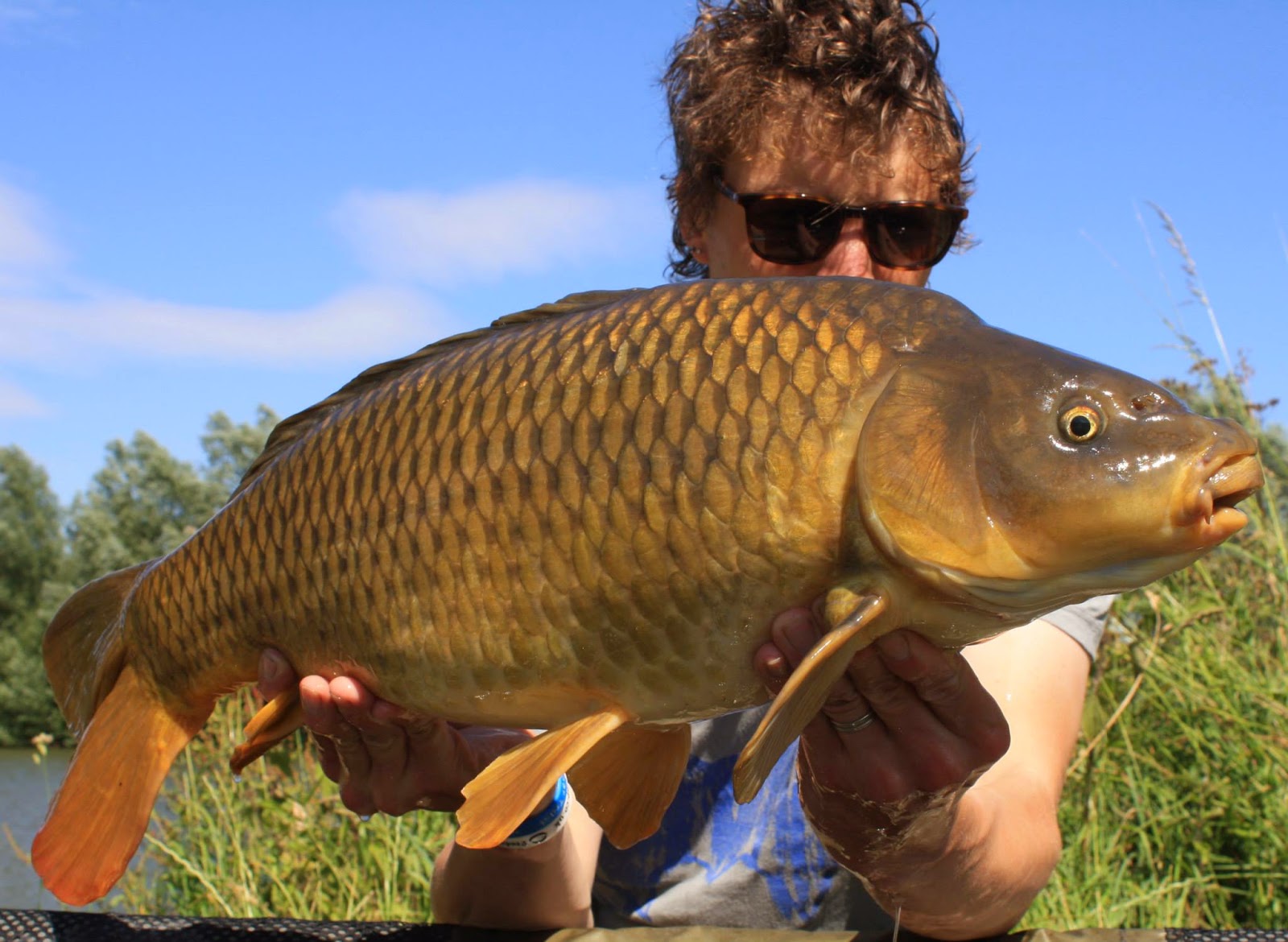 I was very pleased, the fish came off of the rod that was fished deep within the bed of bait. I put about 50 boilies into the zone, recast and sat back to soak up my little victory. It shows that the carp do patrol close in, I was hoping that when the sun starts to evaporate I might be able to pick another few off. The hours went by and as the sun started to set it felt like the magic hour was approaching. Fish started showing all over the place and I could hear distant bite alarms sounding from a few of the other anglers around the lake.

My next take came off my right rod, this was the bait fished off the main spot, instantly this felt like a better carp and it took me a fair few minutes to tame. I netted another stunning looking common, scales sunk to 20IB, she fell to the 'black & white combination'.

20IB Common Caught On The White On Black Combo 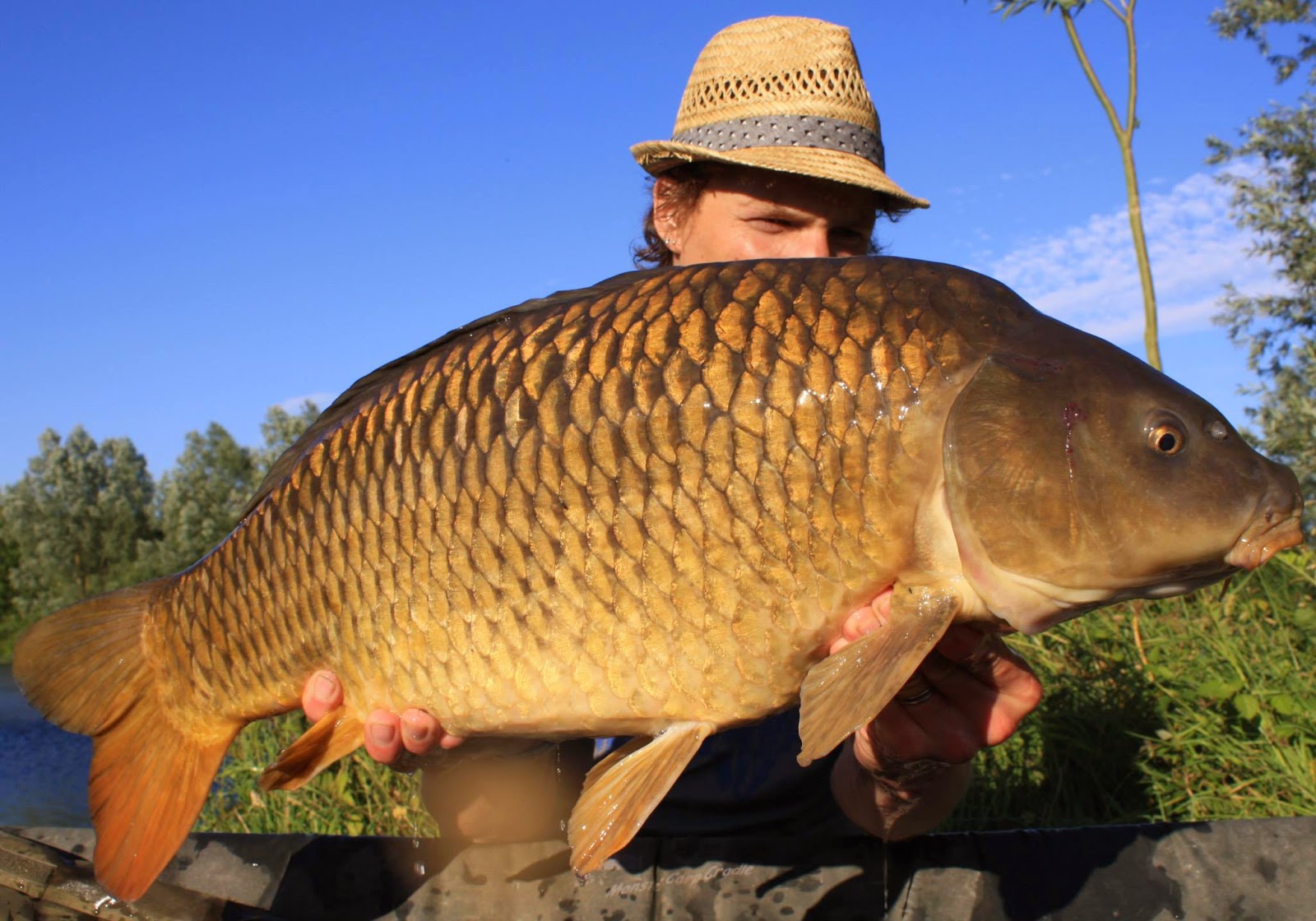 It might have been sheer chance that the better fish of the two came from the bait on the outside of the zone, but once again it started me thinking that the bigger fish could be ghosting around the perimeters of large baited areas. Fishing on the edge of the main spot could just be the key to tripping up the larger residents of the waters.

What happened next was crazy, I changed the hook-link over so I had a new sharp hook on and then I flicked the bait out in to the same area. Within seconds of it landing my rod was pretty much pulled out of my hands. It took me totally by surprise, I lent back into whatever had picked it up and a very unsuspecting fight resumed. The carp had taken the bait on the drop, I can only assume when I cast it out, it landed right next to it's mouth.

I could feel that this was a big fish, my rod was bent double and it was slow, steady and powerful, I maintained the best control that I could, as it surfaced I could see I was into something a little bit special, the minutes passed and I was shaking, I really wanted to get this fish in. As I lowered the net into the water, 'the end' couldn't come quick enough. Finally a big long common stared up at me from the mesh, scales sunk to 28IB 5oz, what a bloody result and once again it came off the bait that wasn't put with the main offerings. 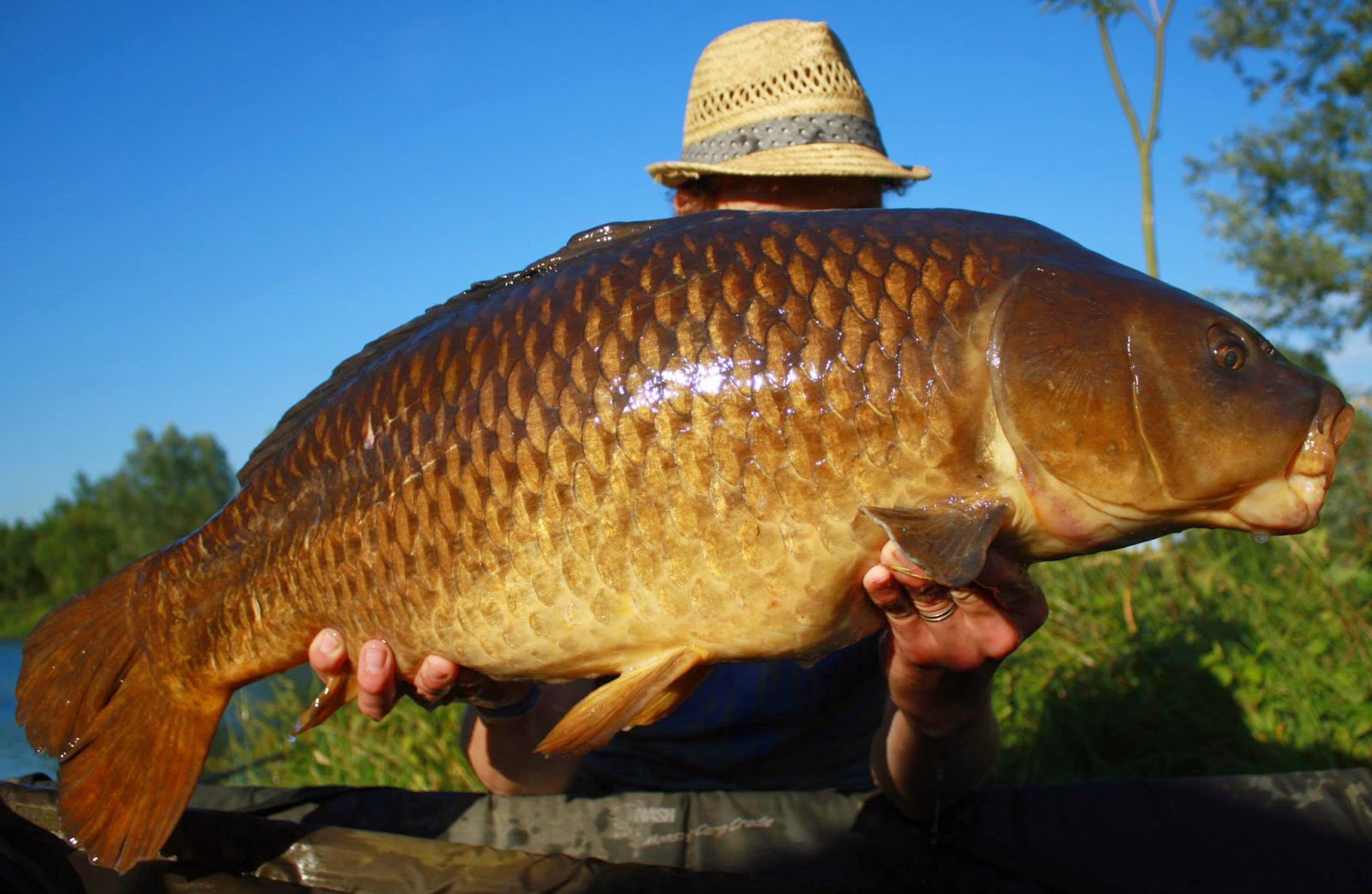 What a session it had turned out to be, it started off slowly but really came together, the baiting approach seemed to do the trick and it's got me thinking hard about a few things. I came to realize a long time ago that if you stop thinking about your angling, you soon stop learning.

Even when I blank I can recall a series of aspects that I've learnt, there is no such thing as a wasted or pointless session, but I guess it's the way you want to look at it. Angling is not a sprint, it's a very long marathon and just when you think that you are 'match fit', something nearly always occurs that humbles you.

I packed up feeling like another piece of the puzzle just might be moulding itself into place. The sun set in the cloudless sky, the breeze became still and as I took the long and painful walk back to my car I once again felt very lucky to have discovered such a magical pass time.
Posted by Charlton Carper at 07:45