In this blog post I'd like to share my thoughts and feelings about fishing for carp on short sessions, I'm going to include material from a few different trips I've been on. I haven't done any night fishing for a long time now, I haven't felt the need. I know that there are certain lakes and even certain fish that feed at night, it has been said that the big girls are known to feed confidently under the cover of darkness. Many moons ago before I had my first twenty I'd be out on the bank for 4 days and 4 nights dreaming of the monsters that were lurking in the muddy waters that stood before me. When I get the calling I'm sure I'll get back under the stars soon enough, but for the time being, days and shorter sessions are doing me well.


The Barrow 'A Must For The Mobile Angler' 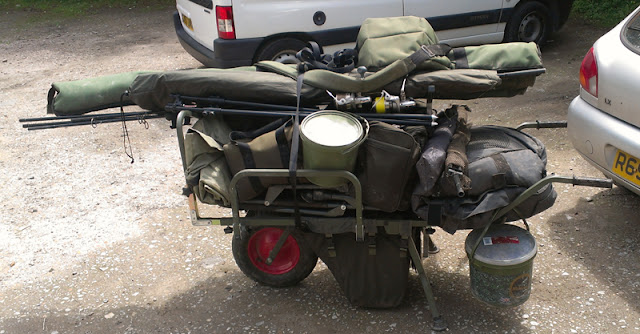 One thing that has become really important to me now more than ever is staying mobile, in the past I'd get all my kit set up, bed-chair, kettle, Bivvy-table, the lot, plonk myself down behind my rods all day and stay firmly rooted to my spot staring at my motionless swingers even though it was clear fish were very obviously showing and feeding in other areas of the lake.

Nowadays I have all my bare essentials next to me and everything else is on my barrow so if I see signs of fish elsewhere and it's possible to move onto them, then I will, this can change a potential blank into a result. Another thing is not being afraid to experiment in all areas, 'you don't know until you try' is a firm mantra I keep in my mind when the days seem slow.

There are a few things that I have started to do to help me get steady results on a lot of the waters I fish. First and foremost it's bait application, working with Starmer I have the luxury of being able to get hold of a fair amount of bait, at the end and during each session I throw groups of ten boilies around certain areas of the water, most of them being where I haven't caught before, or near underwater features that I find using a marker float.

When I go home I keep in mind that the carp will be chomping on the bait between sessions and start to identify it as a safe and regular food source. Also if fishing two rods I'll find a spot I like the look of, I call this 'my third rod spot', through out the day I'll trickle bait on to it and then later on during the session I will cast to it, this can produce a quick take especially if some fish have found the bait and have been feeding on it undisturbed during the day. 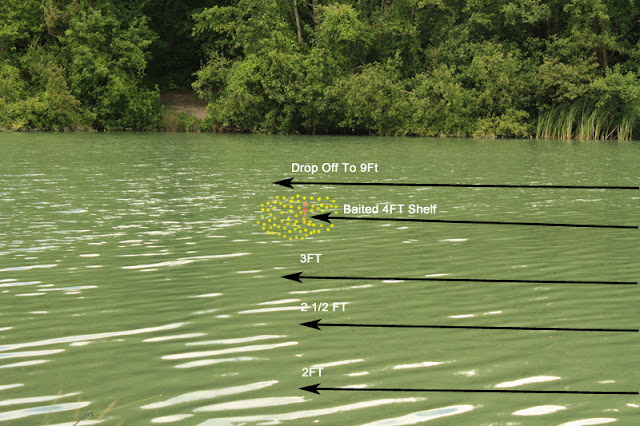 The obvious place to fish in the swim above is the far margin, I've steadily been baiting this area on and off for weeks and it produced a 26IB and 22IB common for me. It goes to show that seeking out and concentrating on underwater features can really pay off.

One tactic that I have been experimenting with lately and have been incorporating into my margin fishing is something I call 'burying the bait, I have two approaches that I use, I started thinking about this years ago in one way or another. The first example is perfect for margin fishing but I wouldn't recommend it for distance fishing because I doubt it would stay intact for the cast. It's simply moulding your ground bait mix around the hook bait. 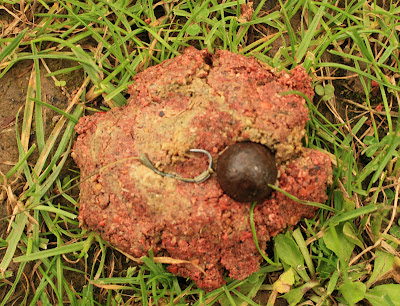 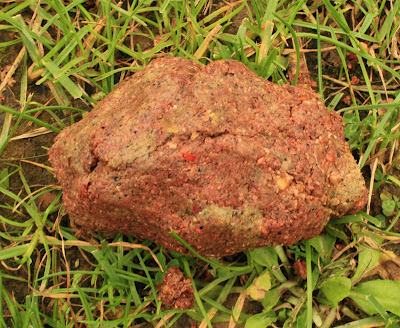 I've been sticking to fairly dry mixes, I've tested all of them in the margin and I've come up with something that seems to work very well as it breaks down. I use Starmers 'Carp Chum', 'Carp Red' 'Green Lipped Mussel Pellets' and the 'White Green Lipped Mussel Method mix'. I make sure the 'Red' and the 'Chum' are mixed tightly and then I add the Mussel mix dry. I have found by doing this when the mixture enters the water the 'Red' and the 'Chum' settle and start to bubble and slowly dissolve whilst the 'Green Lipped Mussel' separates and creates a white cloud which works as a great attracter. As the mix breaks down your hook bait is sitting directly in the middle of a mini feast. I've caught a lot of carp using this in my margin fishing, it seems to trip them up. 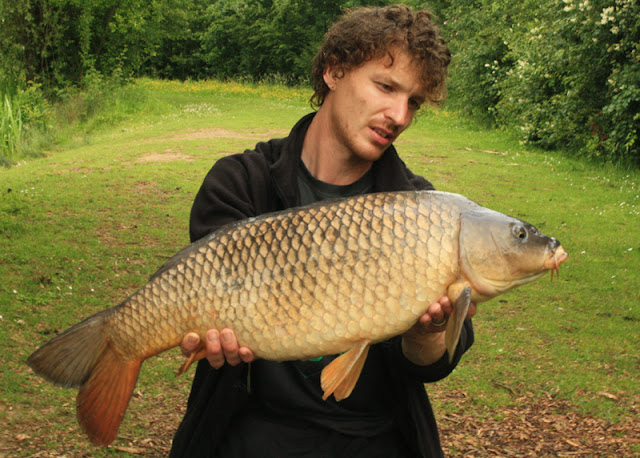 The second example of this is very different and will probably come across as ludicrous to some who read it but bear with me. Many years ago I use to fish a lake called Scarlets, it was a hard lake because the silt was terrible, you would cast your lead into it and literally have your rod bent double to retrieve the rig. In silt and weed I use helicopters and pop ups, occasionally favoring the chod.

I have never been a fan of the 'lead clip system' there's something about it that I don't get on with, I know thousands of carp get caught on it everyday but I favor an inline presentation, it's said that in-lines can pull your bait into silt and depending on how they land, crimp your hook link. I beg to differ, I feel if you feather you cast correctly then you can get the inline lead to land perfectly, I love fishing a stiff hook link tied with a 'figure of eight' knot on the swivel, combining these two elements and feathering the cast the hook-link throws itself forward landing perfectly.


The Figure Of Eight Knot On My Stiff Rigs

In Scarlets there was a 28IB mirror that hadn't seen the bank in about 4 years, the owner had a written record of its weight and date of capture, I put so much time into the lake, there use to be a fair amount of action but through the years it slowed up. I think that was due to a lot of fish being taken, it was one of those venues where the front gate was open 24 hours a day. The owner said that the carp became illusive but I think it was more the fact that they weren't in there anymore.... Anyway I wanted this 28IB mirror real bad. I decided that I was going to use a 2 1/2 inline lead with a really short hook-link fished in the really deep silty areas, I wanted to bury the bait.

For this to work best you need to be 100% accurate with your free offerings. My theory was where I cast my rig deep into the silt I would bait up directly on top of it, as we know carp dig and steam through the bottom when they feed, my viewpoint was if a carp came across my baited spot it would kick the bottom up feeding on my free offerings and in doing so exposing my bottom bait that had theoretically been pulled deeper into the silt.

All the rig components would be buried so there would be nothing for them to spook off. One early morning at around 5:30am I had a break through, whilst I was just about to take a swig of coffee the water erupted like a bloody volcano and my right hand rod tore off like nothing I'd ever seen before. I rushed up spilling my coffee and lent back into the fish, it was steaming off heading for the snags around the island, I was running along the bank trying to gain control. The fish started ploughing through the snags, half way through the fight the fish surfaced and it was the 28IB mirror, we knew this because of the distinctive scaling it had on its back and tail, I couldn't believe it. As the fish was racing down the side of the island the branches and snags were creaking and snapping, all of a sudden...... ping ! the line snapped. I couldn't believe it, I stood there just staring at the water, the angler who was up from me who had just set up packed up and went home because he had been targeting that fish for ages, after the realism of the situation sunk in I decided to pack up and go home as well, I was gutted.

The positive side of it was the fact my unorthodox presentation had worked but at the time it wasn't much consolation. I know it sounds odd but burying your hook bait in the silt fished under free offerings could trick the most wary carp into taking your hook bait.

The next subject I'd like to briefly cover is 'casting to showing fish', now this took me a while to cotton on to. I had tried this in the past with very little success, there were days where I found I was just casting all over the place not leaving the bait anywhere long enough for a take. I put a rule in place that I'd only cast to showing fish if they were in or around the swim I was fishing. I use a simple but effective method for this, it's call a 'PVA pyramid' presentation. It's simply putting 5 boilies in your PVA funnel web system in the shape of a pyramid, I tie the PVA very tight so the boilies exploded all around the hook bait once the PVA has melted down.

I always mix it up a little bit, sometimes with chops and whole boilies, I believe this makes it harder for the carp to distinguish between the hook bait. 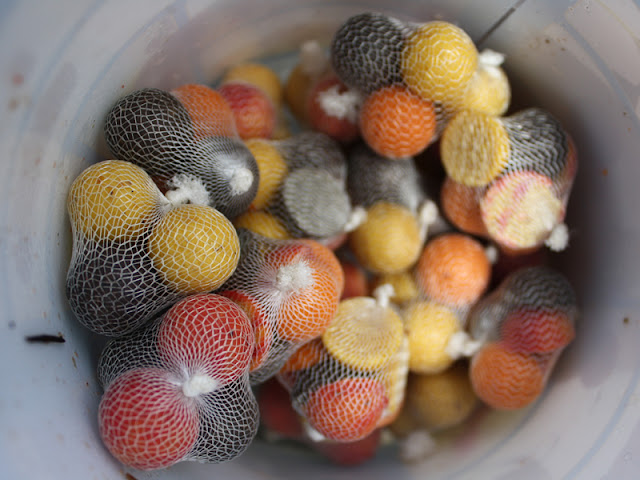 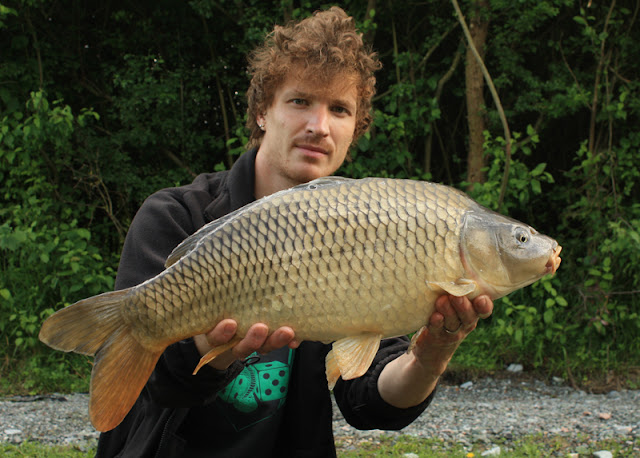 10 Minutes After The Cast 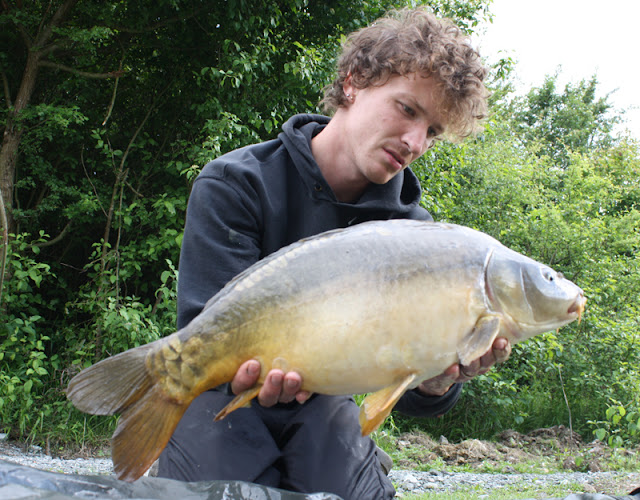 She Fell For My Pyramid Presentation 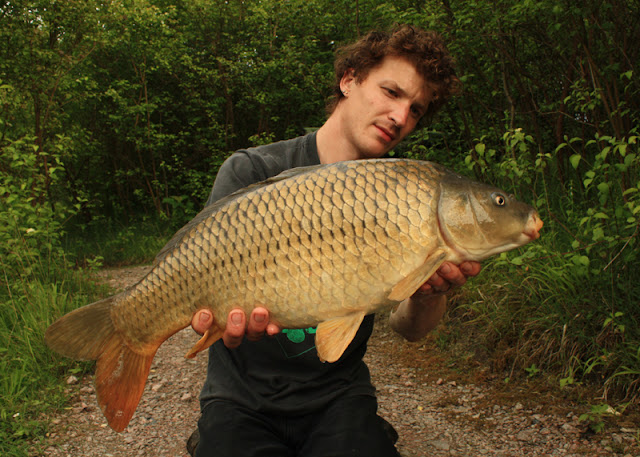 It shows that casting to jumping fish can pay off, but it's worth noting that if you truly feel confident in the traps you set sometimes it's best to sit on your hands and wait, there are many reasons why carp jump clear of the water, it doesn't always mean they're on the feed.

One last method I'd like to include is 'using the lake bottom to your advantage'. When possible I've gotten into the habit of reaching down into the margin and taken a big handful of the bottom you can learn a lot from this. I know that lake bottoms vary, taking into account gravel bars, silt pockets, weedy areas. A fair few waters I fish have clay bottoms so I use a very simple tactic to give me a sneaky edge. I simply rub the clay along my hook link and over my lead and tubing, this colors the whole rig allowing it to blend into the lake bed making it very had to detect, yesterday on a session I moved onto some feeding fish and had two takes in twenty minutes, I felt 'using the lake bottom to my advantage' played a big part in this.


Get Your Hands Dirty 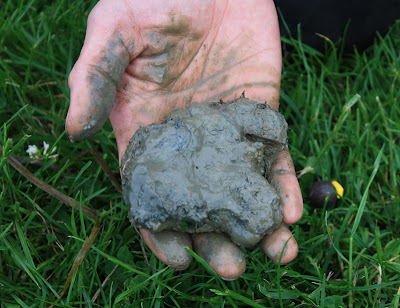 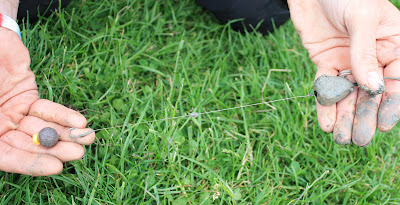 There are many more approaches that I put into practice when fishing shorter sessions, I'm sure they'll be covered at a later date, only today when I was out on one of my regular lakes I came up with another idea and approach that could work really well, I'm going to work with it for a little while before I spill the beans, I'm feeling confident though, it involves getting your hands dirty again.

Now I've got to get blogging about some recent sessions, I'm a little behind, get out there and catch some fish, let me know how you get on.