As with all my product reviews I would like to state that I am in no way connected to Gardner Tackle. I was in the running for some new bite alarms for my two rod setup and after much deliberation I decided to purchase the ATT silent alarm. With this specific make there appears to be no real middle ground, people either love them or hate them.

I for one am a big fan and since purchasing them I have had absolutely no issues of any kind. In this blog post I am going to give my honest opinion. I have reviewed the attx-v2-modular-system receiver that pairs up with these alarms, you can read the review here Wireless Receiver Review. Having used the ATT's all year round and in all types of weather conditions I feel I can now give a rounded viewpoint. 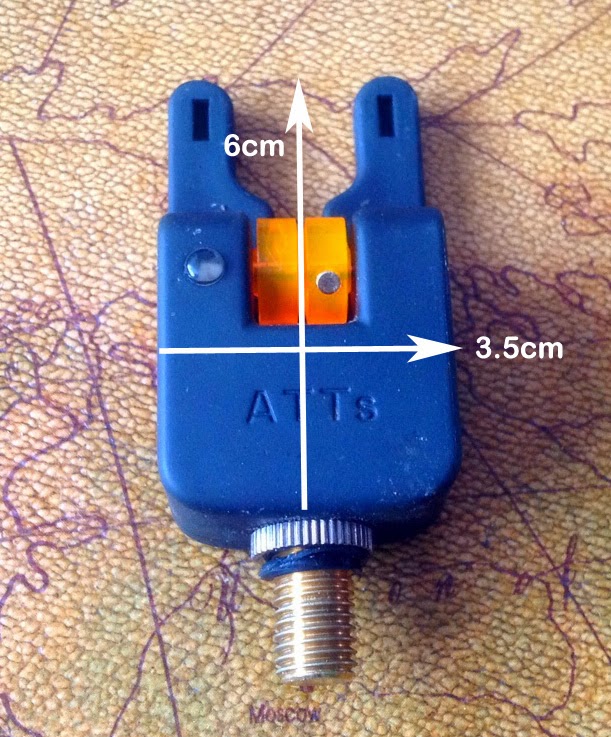 More than any other item of tackle, the bite alarm is the one piece of kit that is very easy to be led down the garden path with. I find we can get all hung up on the 'features' aspect and 'look', rather than the functionality and the reliability. A bite alarms primary job is to communicate fully what is occurring in the murky depths that stretch before us.

The basic rule for me is that the more there is, the more chance you have of something going wrong. Don't get me wrong, I love the all singing, all dancing bite alarms as much as the next guy, hence why I still use my original Fox DXRs when fishing three rods, I still find I rarely use most of the features on them though. At the end of the day I look for build quality and if it makes a noise when I have a fish on. 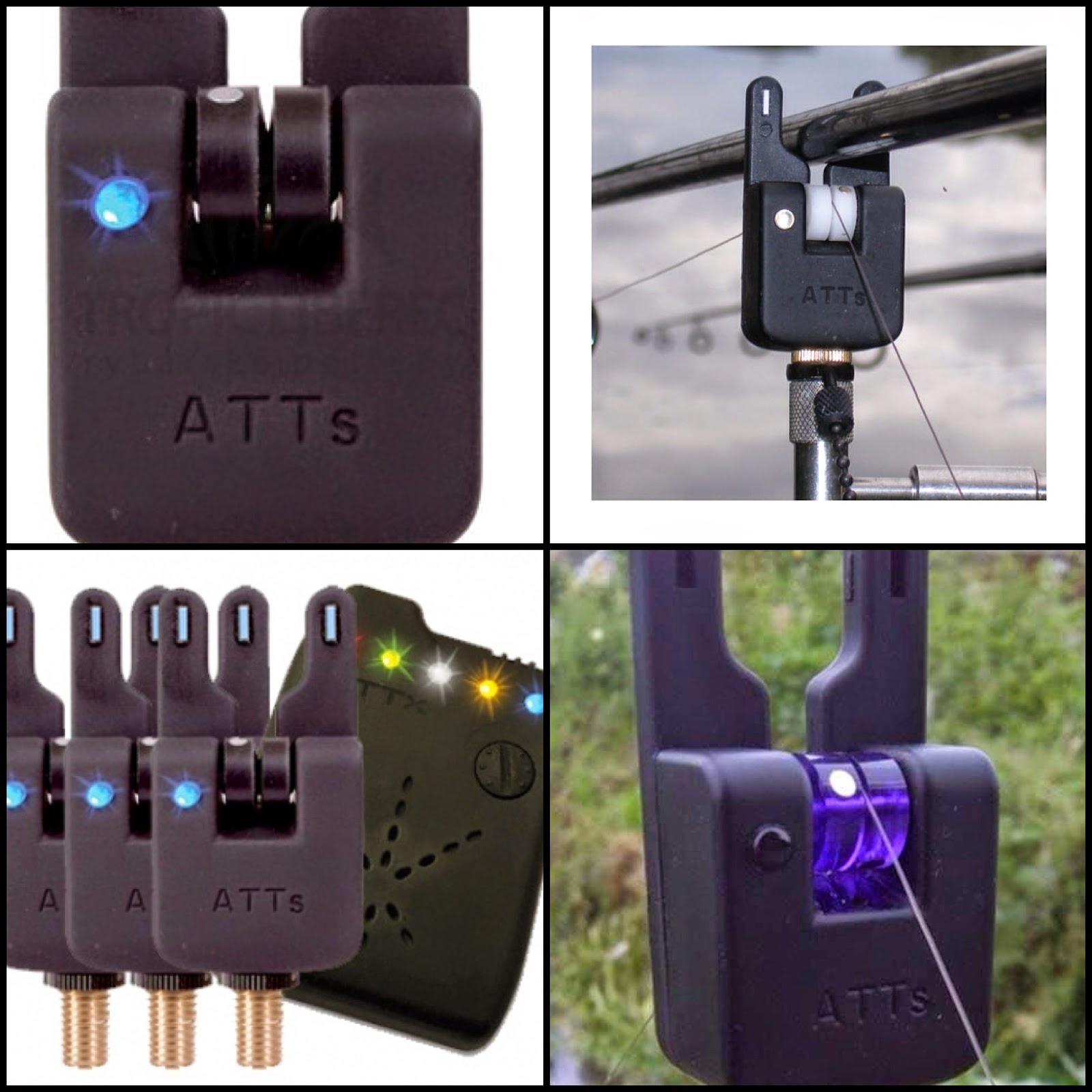 The first point that struck me about the ATTs is how small and compact they are. And it really is "what you see is what you get", it's just a roller wheel and an LED, no speaker, no buttons, smart, simple and sharp looking. The alarm itself is water resistant and pretty much bomb proof, it's a sealed unit so nothing can get in. Since owning them I haven't had to change the battery in the heads once. The "on & off" feature is as simple as you can get, there is a small magnet in the alarm cover that, once slipped over the alarm it actually turns it off. In the picture below you will see the small built in magnet on the case. 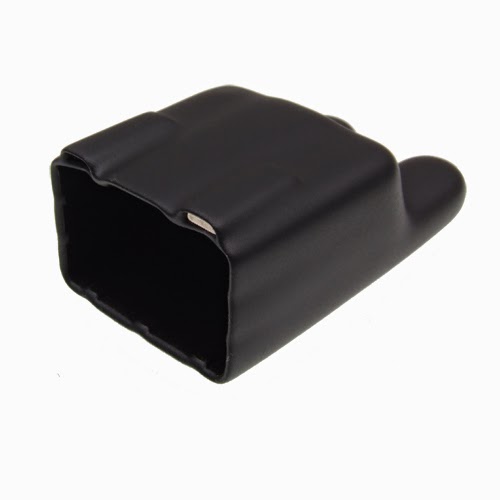 The ATT has a roller wheel system, the alarm is triggered by magnets fixed in the wheel itself. In regards to sensitivity you can get both two and four mag wheels. Being honest, the two mag is more than enough, it allows a little movement from both wind and undertow and you don't suffer from as many false indications, the four mag is overkill in my opinion. The wheels come in an array of colours to match up with the colours of the LEDs, this makes the alarm look super tidy and will definitely satisfy the "Tackle Tart" in you. 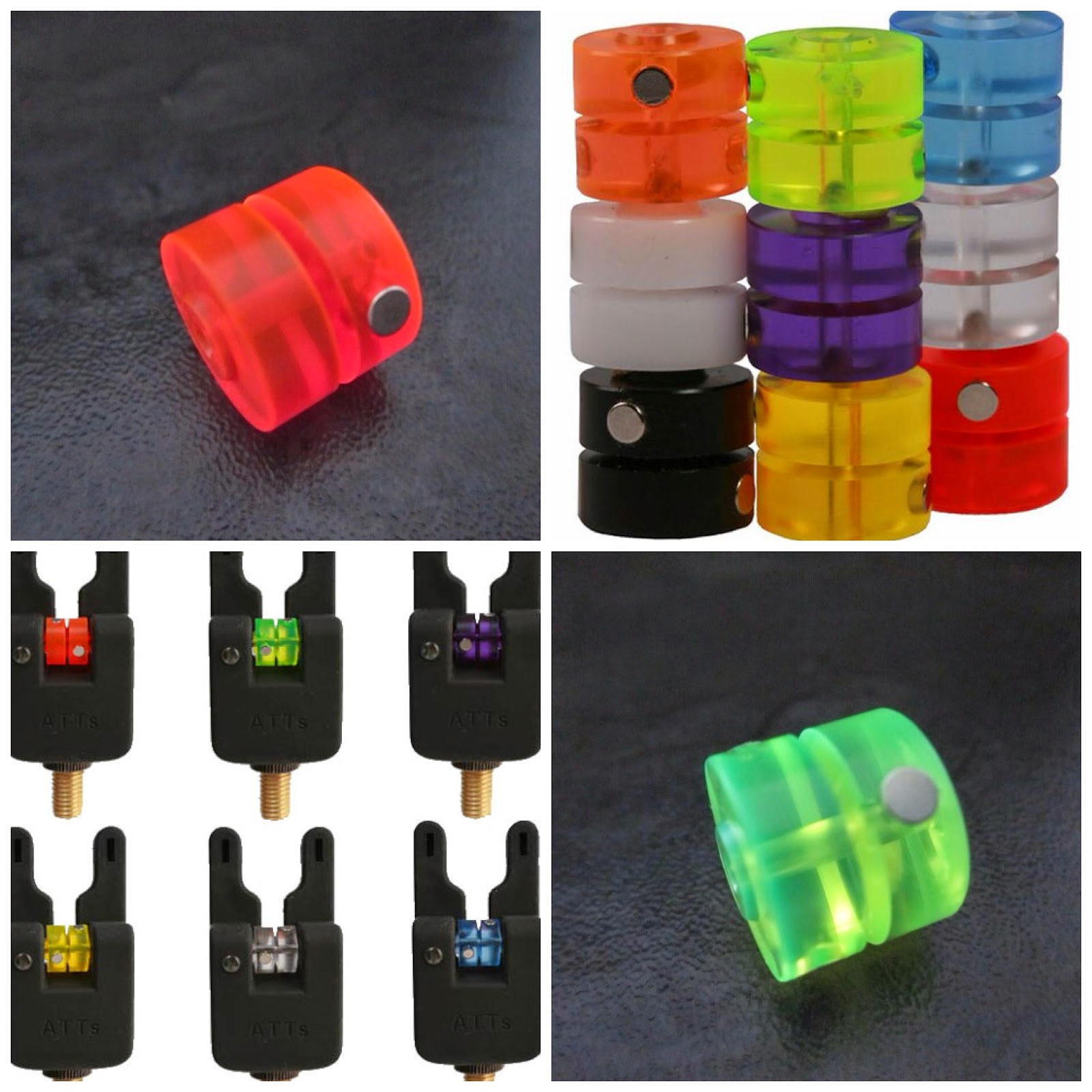 I know that some people are wary of a roller wheel system, fearing that it might freeze up in extreme weather. I have never had any problems with this on any alarm that I have owned and they have all been roller wheel systems. As a precautionary measure, every few weeks I will remove the wheel and give the section of the alarm in which it's housed a good clean to remove any dirt and debris. Removing the wheel is simple with only having to undo a single screw that can be found on the side of the unit. 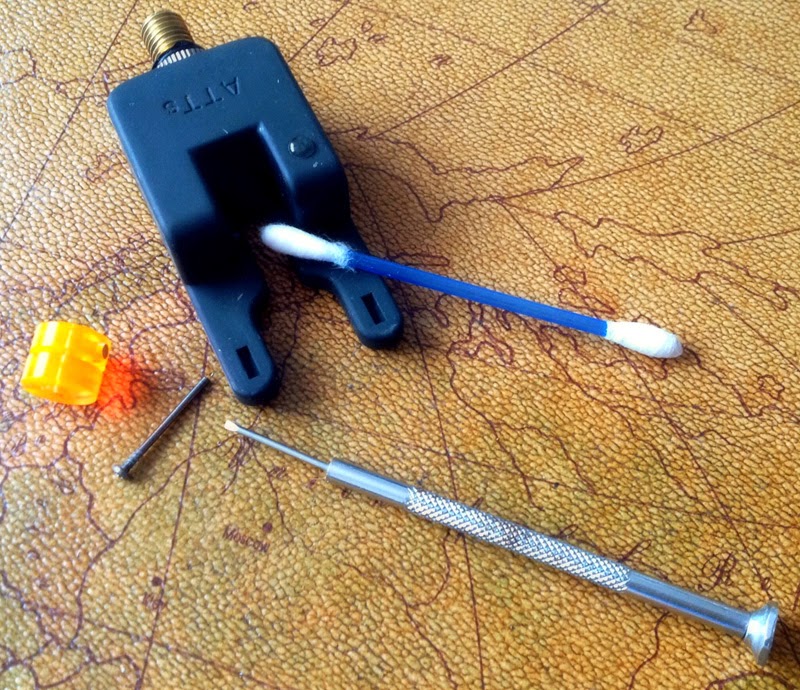 After trying a few different combinations I have come to find that a heavy bobbin or swinger is the best type to pair up with these specific alarms. This ensures that the line is kept nice and tight whilst it rests in the roller wheel, thus stopping the chance of a take not registering properly due to the line sliding through the wheel instead of gripping it. I favour a nice heavy stainless steel hanger. This approach is vital when fishing slack lines 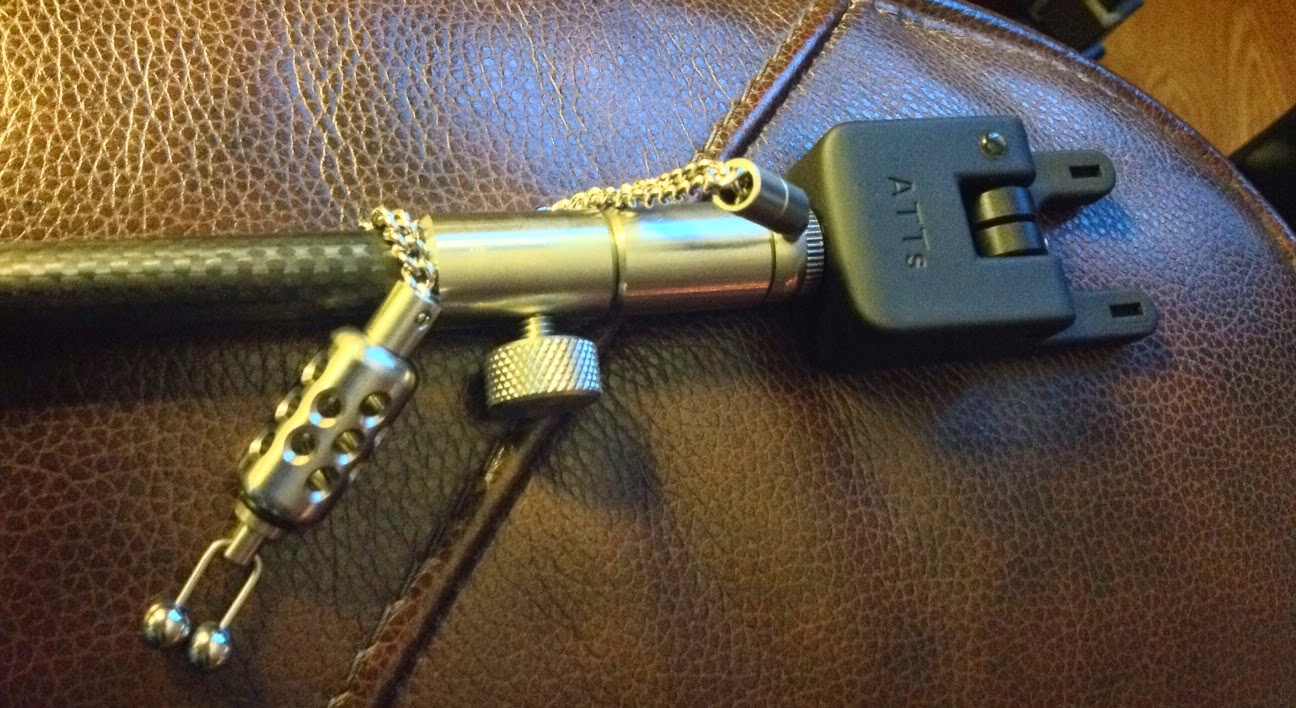 Reviewing the indication I have had on the ATT's since using them, they've registered everything from vicious takes, tiny drop backs and even single bleeps where the carp has picked the bait up without bolting. What you hear from the alarm is a true representation of what is occurring. Having fished with guys that own the Delkim TXI's, I was very surprised to find that when they are on the maximum sensitivity a liner can sometimes sound like a full blown run. I think that it's important to have an alarm that truly represents exactly what is happening so no mishits are made - How many of us have hit into liners?

In the past I have read that people avoid the ATT system because there's a chance that if the receiver breaks you will be left with silent alarms, or if the battery runs out in the receiver you are in trouble. Firstly I always carry spare batteries, it's no hassle to carry a couple of AAA's in my bag, the battery life is long lasting on both the receiver and the alarm units. In regards to the receiver breaking, that's just a risk that is taken, you can't really 'odds that one'. You can get various cases for it, including a waterproof model that will keep it nice and safe.

Various Cases For The Receiver 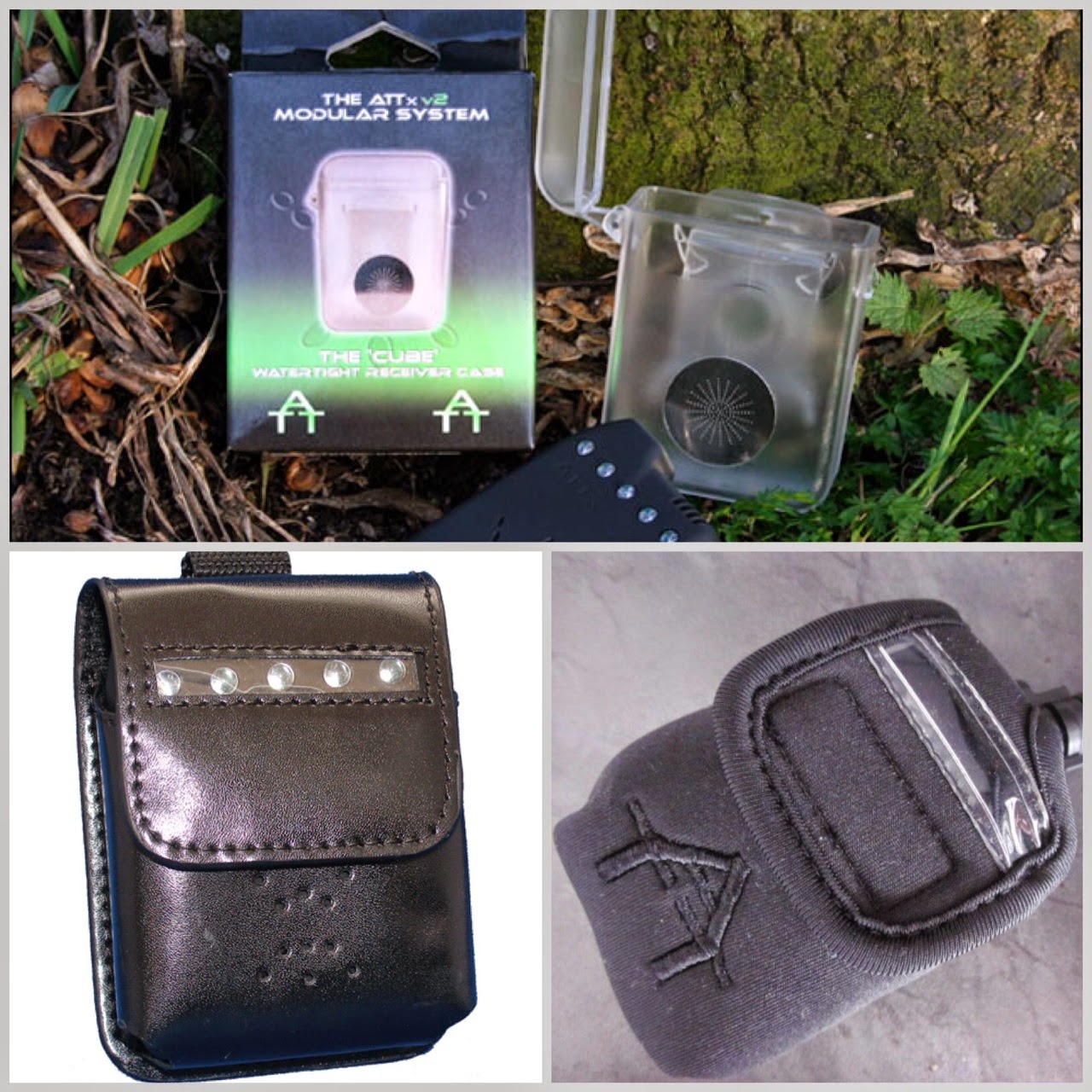 There are a few minor issues that I have come across, nothing to do with the reliability, more to do with personal preference. Firstly in daylight you have to be face on to the alarm to see the LEDs illuminated, if you are sitting slightly either side, you can't tell which one is lit up. Obviously there is a function on the handset that lets you review which alarm was the last one to register, this is found out simply by pressing a button.

I Hope The Paragraph Below Makes Sense

Secondly when the receiver is on vibration mode, it vibrates in short bursts of around 2 seconds, even if you have a screaming run, it vibrates along with short intervals. This has actually cost me a fish in the past on a session where I had been experiencing a lot of false indications. It was gale force winds so the receiver was vibrating all the time, within this period I actually got a ripping take but due to the swim that I was in and the fact I couldn't see my rods, being hunched under a shelter, I just assumed the response from the receiver was still the wind. I didn't realise until I looked at my rods that one had been tearing off for a minute or so. Basically a liner registers with a similar vibration as a full blown run. I have only ever experienced this miscommunication when the receiver is on silent. When you have the volume up a bit, it's far easier to know what's occurring.

I am not sure what else to say really, all in all if you are looking for an alarm without 'all the bells and whistles', and 'does what it says on the tin', then I seriously recommend that you take a look at the ATTs. They really are one hell of an alarm for the money, they're built well, small, light and will compliment your setup in a cool understated fashion. The way I see it, if a product sells by the thousands, you're always going to get a few that are faulty, that's just the law of averages, it happens with cars, washing machines even fishing rods, that's just the way it is. Don't let other peoples negative experiences put you off of something that you where otherwise interested in. Get out there and have a good look for yourself. Apart from two minor points, I can't recommend these alarms enough and I have no doubt that they will last me for many years to come.

Three Of A Kind 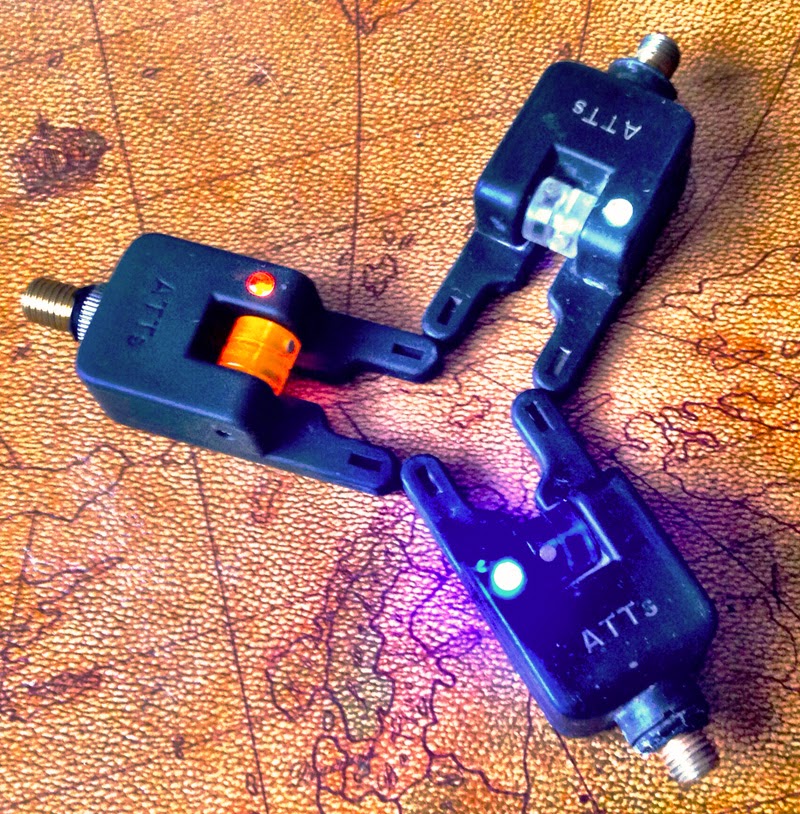 Posted by Charlton Carper at 04:32