After the success of my last session my angling mind was preoccupied with the thoughts of getting back down the mere as soon as humanly possible. Now having found an approach that worked I really felt that I stood a good chance of unearthing some of the better fish. It had crossed my mind that if I stayed focused on Micklem for the foreseeable future then my 'big carp' catch rate would drop off, but that was a sacrifice that I was prepared to make, there was going to be plenty of time left to get back out on my other waters. If I didn't make a concerted effort on Micklem now, I feared that I never would.


Me And Eric On The Banks Of Micklem 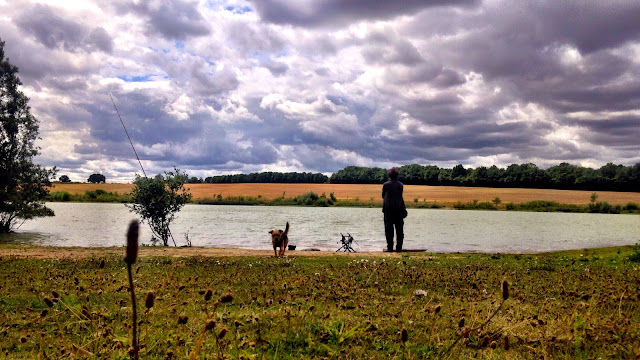 I was going to be approaching this session in exactly the same way as last time, the only difference being the make up of both my solid bag and sloppy mixes. The rig was going to be identical and I was going to target the same spots, I'd made notes of the wraps on each rod and the horizon markers that I was aiming for. Recording all these little details would allow me to get the rods out in super fast time and keep disturbance to a minimum.

But.... on arriving at the water it became apparent very quickly that I was going to have to rethink my plan. Pulling up into the car park and looking down on the mere, I could see the trees contorting, the wind was crazy and I could easily make out waves as the whole contents of Micklem was being propelled towards the right hand bank. It was like witnessing the eye of a storm, it was very strange because there was barely a whimper of wind in the car park. This eerie atmosphere only heightened my anticipation so I set forth into the chaos to try my luck.

I decided to make my way up to the same swim I was in last time and fish into the wind. Despite the conditions it was warm and I had a sense that a few carp might be hauled up along the margin to the left of me. My right rod was going to be fished on a solid bag that I was going to lob out as far as I could, taking into account the strenght of the wind. I wouldn't be feeding slop over this bait, it was going to be left on its own, there was no way I would be able to apply the feed accurately.

My left hand rod was going to also be fished on a solid bag, this would be placed on the silty area in front of the trees to the left of the swim, because I was fishing at short range I felt I could apply the slop without too much problem. Below is a panoramic view of my swim on a much quieter day, it will give you a clearer understanding of the way I've chosen to fish it.

Prior to casting out I got my mix together, the make up was exactly the same as last time, the only difference being that I'd chosen to use the "Big Fishmeal" method mix. My reasons behind this were simple, I have a vast range of method mixes and I'm wanting to use them all and compare the results. Combining both the 'hot chilli hemp' & the 'salmon marine' blends worked a treat last time, I was curious to see if a 'fish meal' based attractor would make any difference. For those of you that want to know more about my sloppy spod mix and the ingredients used, you can review part 1 of this blog here PART ONE. 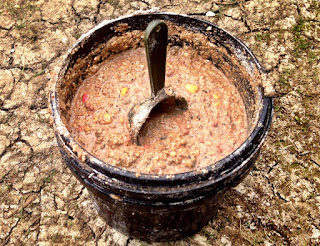 With both my wet and dry mixes ready I rigged my rods up, I took refuge behind the trees to seek some respite from natures onslaught, trying to tie a sold bag when its contents is swiftly being removed by the wind was an impossible task. Just like last time, I decided to stick with the floating corn and half a 10mil boilie combination. Both PVA bags were finally tied, the right rod was launched into the oblivion before me and the left rod was clipped up to 9.5 wraps and comfortably put on the silty spot to my left. How I managed to get the bags out accurately was an achievement within itself. 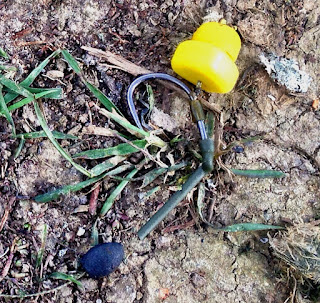 The next step was to introduce my loose feed, I clipped my spod rod up to 11 wraps, the plan was to dump the slop a little further out and use the wind to my advantage. Because it was pushing so hard in my face, I knew the slop would drift nicely towards the area I was targeting. I pictured chaos under the water, I had no doubt that bits and pieces where flying around everywhere, and with my slop being introduced into the equation I felt it was just a matter of time before I got a bite.

Using the Wind To My Advantage 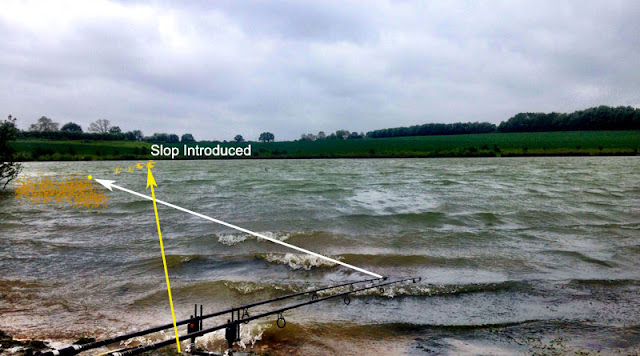 I fed the spot for a good twenty minutes and then decided to give it a rest, I was going to top the swim up every hour. Despite the difficult conditions I was managing to hit the clip on every cast, the key was to really give it some power. I stood firmly by my rods, determined to stick it out, the mere felt like a wild ocean, my rod pod felt like a cruise liner, I was the captain and if my vessel was to sink, I'd sink with it.

It always amazes me how the weather can change the feel of a water, when I think back to what the conditions were like on my last visit, it felt like a totally different world. I started to think about all the waters that I fish as having personalities and each of them having a disorder, 'schizophrenia' sprang to mind.

On those quiet warm days they welcome you with open arms, the outside world becomes a void that you have no intention of reentering. Then you have the days like today, when it's brutal, it's as if the water has made an unwritten agreement with mother earth to help banish you from its banks forever more.

Just as I was about to retreat for shelter my right rod blurted out a few bleeps, the bobbin smacked the blank and then dropped back, the rod tip was fidgeting. Lifting into the fish it became clear I'd hooked into another one of Micklems smaller carp and I had no doubt it was going to be a picture of perfection. It felt funny sliding my 42' net under something so small but it's the right thing to do.

Give It A Few Years 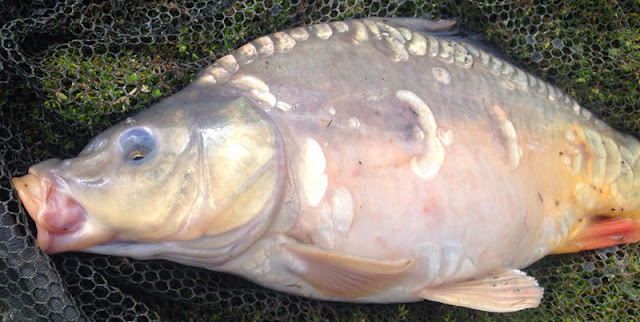 Upon returning the fish to the water I got another solid bag tied and cast it out as hard as I could, it pretty much landed in the same area, I was happy. The previous bite indicated to me that I needn't be spodding every minute to draw the fish in, the attraction in the bag alone is enough to get me a bite - this was something to take into account for future sessions.

Within minutes the same rod was away again, I could tell by the nature of the bite that it was another cheeky scamp, gently reeling it in I started to imagine that maybe I had a secret monster on the end that was reluctant to put up a fight. Sadly not, but the quality of the little common that materialised from the waters skin was a fine reward, it was perfect. 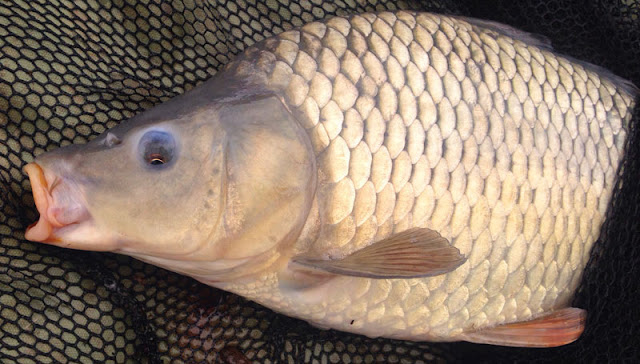 With all these small carp that I was starting to catch, Micklems sentences and paragraphs were slowly being written. This is what it's all about, as stated before, this mere isn't a "rent a carp" type water, it's an entity all of its own and I know that in the next ten years it's going to be such a special place. I feel honoured to get in on it early and as I grow older and weathered, so will the mere and all its inhabitants, hopefully they will choose to pay me a fleeting visit in years to come.

The right rod was back out and I felt it was about time I fed my left spot, twenty spods went out. I was going to continue this process until I got a bite. The afternoon ticked by and I continued to feed the swim, surly the effort was going to produce something? I persevered and stuck to my plan. As the day started to fade the onslaught of wind just kept on coming, I was starting to feel like I'd ran a half marathon, all my slop was now in the lake, and in my hair.

As evening came I started to resign myself to the fact that I might have got both the spot and bait application wrong regarding my left hand rod. I reeled my right rod in and started to pack it down, I always seem to draw this process out in the hope the remaining rod might spring into action.

'No word of a lie', that's exactly what happened, it simply ripped off, the take was aggressive, the clutch was smoking and the rod was bent right round. This certainly wasn't a small resident, if it was, it was on steroids, I lept into action mode, grabbed the rod, instantly I could feel that this was a heavy fish and it was steaming along, I let it run, the initial run was long and I had to just let it go doing my best to keep it away from the tree line. The wind was battering me physically and this fish was battering me spiritually.. but what a feeling it was.

I was slowly gaining ground, there were some serious flat spots occurring where the fish was wallowing around just under the surface. A broad back surfaced, closely followed by a large fanned tail. My legs were shaking a little bit and I was praying that I was going to be able to get it in. It slowly started to tire, closer she came, with net in hand I stretched as far as I could and as the fish came to rest upon her side I raised the mesh around her. I was face to face with a big common, myth had come reality. 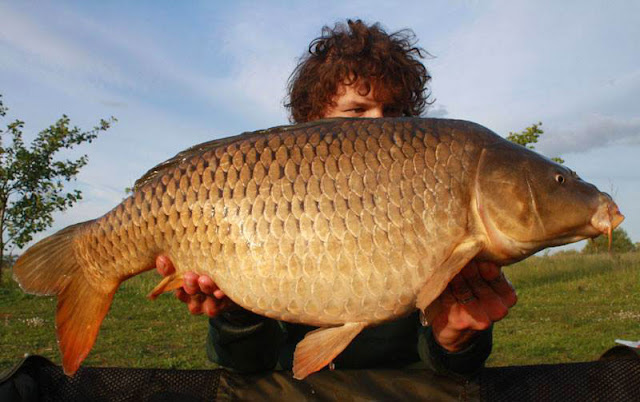 The condition of this fish encapsulated all the reasons why I fish the waters that I do. The longer I've been angling its become clear that I'm not motivated by the amount of carp I catch or the size, it's about the quality. I adore fishing for lovely clean fish, that's my buzz, and releasing them back in the same condition that I catch them is of the utmost importance. I say it so many times but the fish we catch deserve to be respected.

Once she was returned home I slowly got my gear together, this capture had been the highlight of my season so far. When I think back to the previous season, I couldn't buy a bite, it goes to show that really thinking hard about what you're doing and subtly changing your approach when needed, can be such an important factor. I was going to give Micklem a break for a week or so and come back with a fresh perspective. Next stop was going to be Blunts Mere, I could feel a 'long dark carp' obsession coming on. 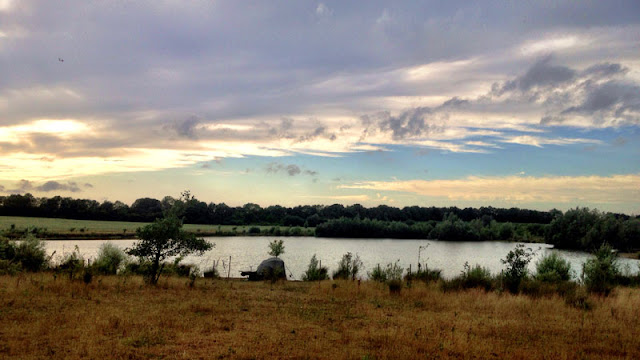 Posted by Charlton Carper at 08:21 No comments: