I am still chipping away over at Birds Green fishery, I left it for a few weeks because the weather was all over the place and the fish just seemed unresponsive. With the weather cooling down a little I thought I'd head back to see if the fishing had picked up a little. Even though I have fished the top lake a lot and had a fair few good fish out I still find the water pretty moody.

Last week I went down for a session that ended up being just one of those days where things just didn't connect properly. I had 3 runs and only managed to land 1 fish. The first fish was a 13IB common, the second fish took me under both my back leads and then came off, the third took my bait when another angler had come round to talk to me, I was distracted and didn't manged to hear my bite alarm in time, the fish had run into a snag a ditched the hook. I always have my bite alarm volume low, in the future I'm going to have to remember to turn them up a little louder. 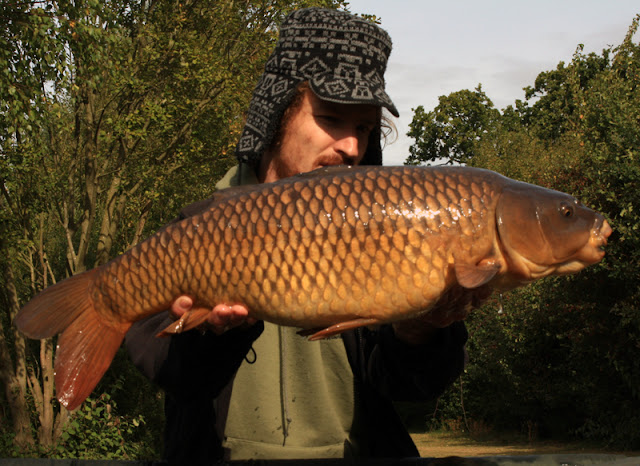 This session I was lucky because there weren't many anglers on the lake, I took a walk around, it was windy so it was hard to see any signs of feeding fish, I decided to follow the wind and fish in the bottom corner of the lake. This swim can be really productive when the wind is blowing down into it. 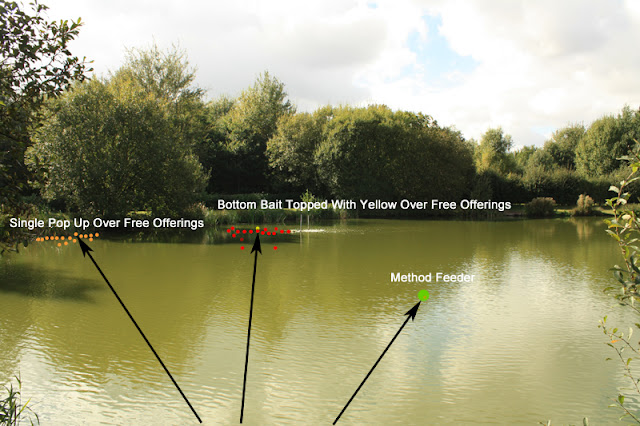 I was fishing a pop up on one rod, a bottom bait on the second and I thought I'd try something a little different on the third by using a method feeder. I was confident in my spot off the reeds to the left, the aerator can be a little hit or miss, I have seen a fair few bubbles on recent trips around 2 rod lengths out, I was kind of thinking I might be able to intercept the odd fish as it heads towards the corner.

My method mix was pretty simple, I used Starmers GLM ground-bait with some GLM pellets, I then added a tin of Sardines along with the oil they'd been soaking in. When fishing 'The Method' you've got to make sure the mix isn't to runny as it will come off on the cast, if it's two stiff it won't break down so you've got to find a good middle ground, something that's stiff but able to breakdown nicely once cast out. 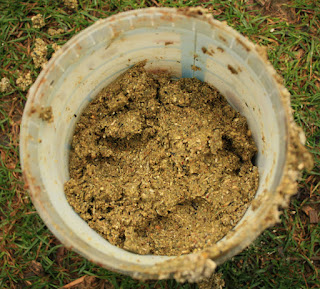 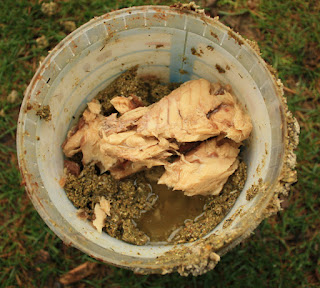 A Ball Of The Good Stuff 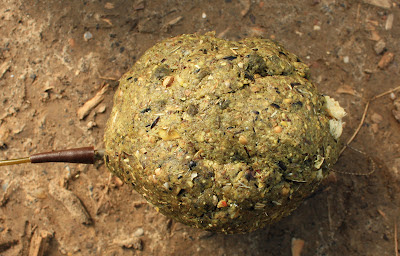 On my bottom bait rod I fished a small PVA bag, "Carp Craze" 22m funnel web containing GLM method mix 'dry' with a few GLM pellets, I topped my boilie off with a thin slither of yellow foam just to add something a little visual to the presentation. 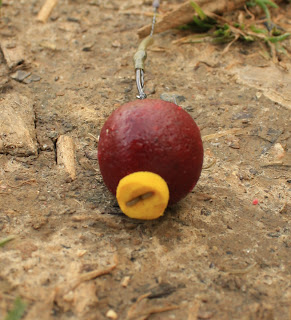 If all goes according to plan the PVA will melt leaving the pop up perched nicely in the cloud of ground-bait, putting it in the PVA dry really produces a lovely cloud around the hook bait, the particles tend to drift around nicely, which adds great attraction quality.


A Little Bag Of Goodies 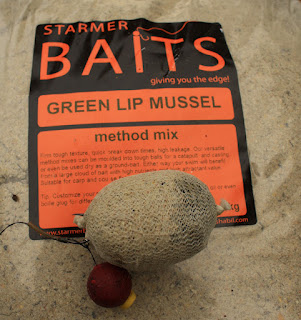 Shortly after getting all three rods out, a carp topped straight out in front of me very close to where my method feeder was, I was feeling quietly confident, the wind was picking up. A few fish were also showing behind the wind so even though I was confident in my spots, that got me thinking about a possible move. I thought I'd give it the morning, keep and eye on the water and if need be make a move. I had a gut feeling a fair few fish might be hauling up behind the wind.

The hours past and the buzzers remained silent, I wasn't even getting any liners. From past experience you usually nail one an hour or so into the session, this then sets you up for the day. Because no take came I was thinking the carp were somewhere else. During the morning I had been firing out some floating pellets just to see if they might have been in the top layers of the water, I didn't get any positive signs. I decided I'd move up along the side of the island where the calmer water was. 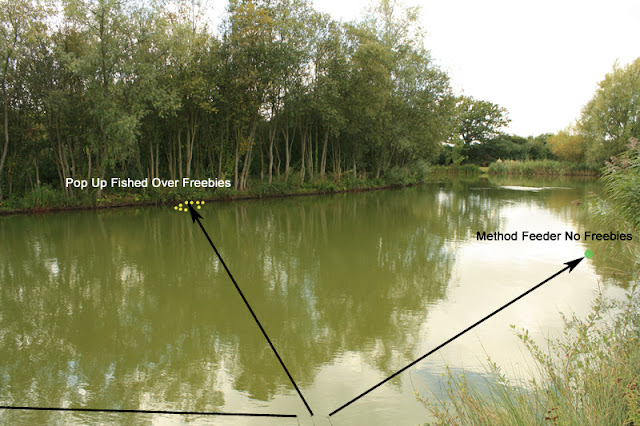 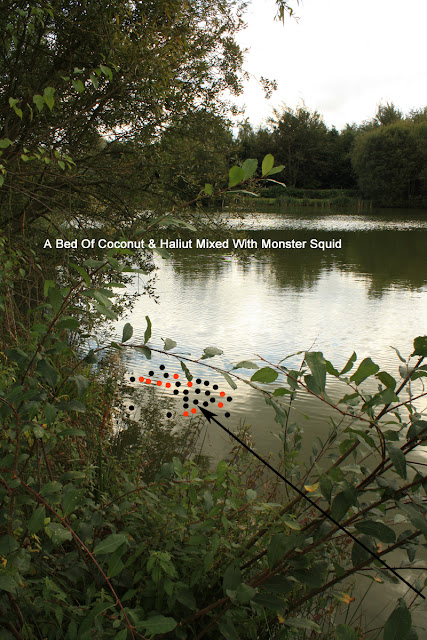 I got my rods out on my chosen spots pretty quickly to avoid disturbing the swim to much, I felt moving was the right thing to do. I could see carp feeding in the channel in front of me. Because I was now behind the wind, I could see there was a fair amount of feeding going on on the bar running from the island. A few more hours passed with very little action, I was getting a few liners which was a good sign, periodically I was introducing some floating pellets in to the swim and a few carp were starting to show some interest.

The time was ticking by now and it was around 4:30pm that the carp seemed to start showing and topping. Because so much action was coming off the bar I decided I'd put my left hand rod onto it using a simple 4 bait PVA bag. 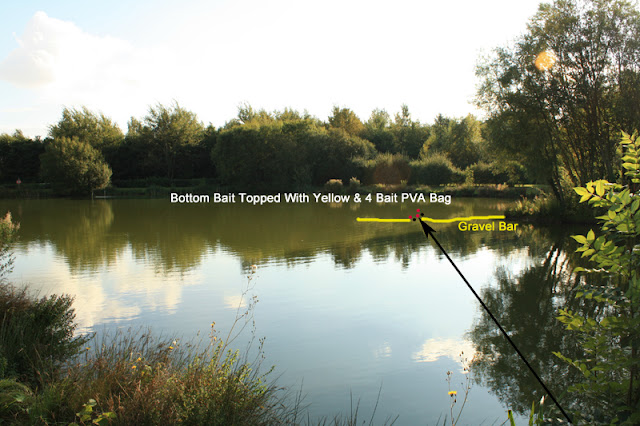 Another hour ticked by, it was now just past 5:30pm and then out the blue my middle rod flew off with speed, I lent into the fish and it powered off down the side of the island. It was packing some real power, I slowly teased her my way, she surfaced, it was a chunky looking common. As I got her underneath my rod tip she made a last bid for freedom by trying to take me through the reeds down to the right of me, she very nearly succeeded. I kept the pressure on and managed to steer her over my net, I was well pleased, as I stood there staring at her in my net, I felt a massive sense of achievement. Scales sunk bang on 18IB.

18IB Common, Well Worth The Wait 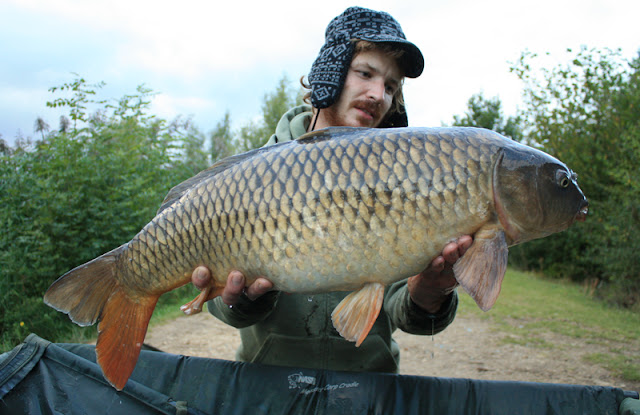 I got her back and got my rod back out, the light was starting to fade and it looked like rain, the carp were still coming up for the floater pellets that I put out earlier, because it was darker they were taking real confidently, whilst I was getting my floater rod setup the heavens opened, the rain was so heavy that I tucked myself under my brolly to wait for it to pass.

Whilst I was shielding myself from the rain all my bite alarms suddenly bleeped and all three rods shuddered. I didn't really think anything of it, it was only when the rain stopped and I went over to my rods that I noticed my far left hanger had been pulled up to the top, I'd had a take off my bar rod without realising it, a bush was obscuring the hanger from where I was sitting. I lifted into the rod and it became clear a carp had taken the bait and managed to ditch the hook, it was very annoying. The bait had moved a good 15 yards down the lake. This signalled the end of the session, not really the end I wanted but in all accounts it had been a solid, if not testing day.

Next time I go to Birds Green I am going to give the bar a go, from all my previous visits its become clear that the fish are nearly always holding on it or very near it, I am going to just fish PVA bags without any free offerings, I'm looking forward to see what materialises with this approach.
Posted by Charlton Carper at 03:23