Nestled deep within the Medway valley sunken into the landscape rests a water called The Cut. It is overgrown with no swims and at first glance you'd think that you were looking at a stretch of wild river. I know that it contains some carp but there's no real record of how many there are or how big they go. There's been some rumours of a few big commons lurking, to be honest neither of these points matter to me when approaching a water like this. The Cut is like an unanswered question and it's a question that I am determined to answer. This blog is going to account for a series of short sessions most being on consecutive days. I won't go into huge detail, taking into account my last few blogs have been long and pretty heavy going. 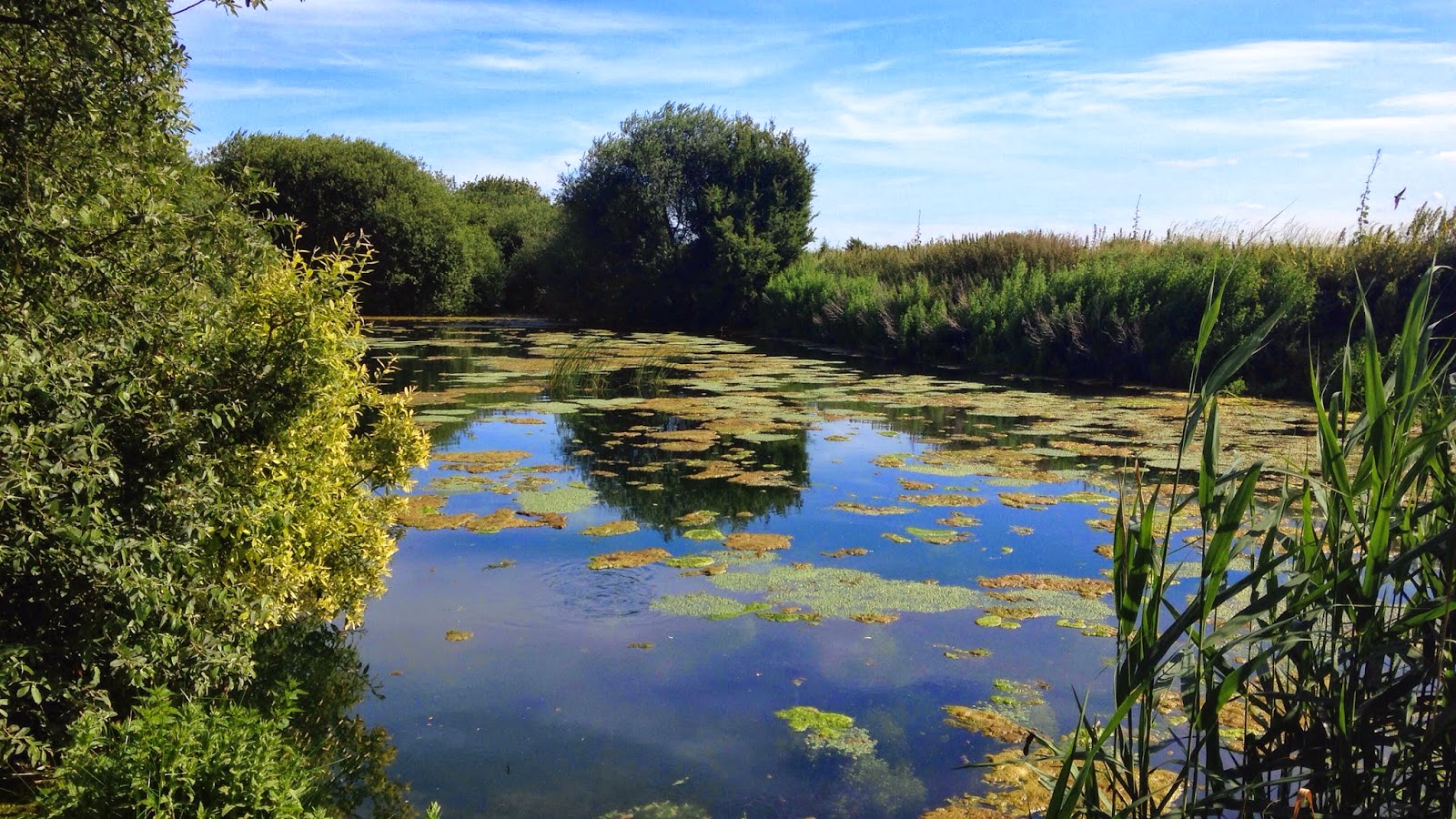 In the past I have done my time here but I never really got into the groove, I wouldn't class it as easy fishing, I have managed a few fish out and both were lovely and dark, scraping double figures. It's a very strange water, it's clear, weedy and very shallow in places, I have found that the fish very rarely give themselves away and it's easy to think that no carp are present. It took me a long time to unlock but every minute I've spent on its banks has been an utter pleasure. It's as if time just evaporates into the ether and the outside world is decades away.

At first presentation was a bit of an issue due to the amount of naturals that the water provides, I found that steering away from modern baits and going back to basics proved successful. Fishing peperami topped off with buoyant corn seemed to attract the carp. Any time I fished boilies I would get inundated with tench and bream.

This got me thinking on how I could mimic peperami by using a boilie, to achieve the same presentation I opted on using a salmon marine hooker pellet heavily glugged in Garlic Sausage flavouring. The hooker pellets are a dumbbell shape and if you trim them down you can get almost the same aesthetic as peperami. 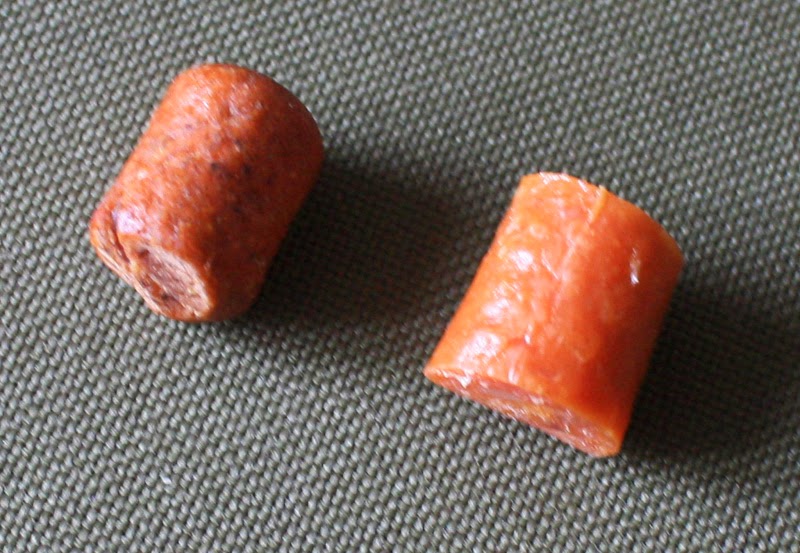 I replaced the buoyant corn with half of a yellow Avid zig dumbbell, these are super buoyant and allow the bait to sit nicely up on the bottom. It's similar to a KD presentation but without the KD whipping. I call it 'The Savoury Rig' and it has accounted for a fair few carp in recent years. The secret to the rig is to get it balancing perfectly so the bait is hovering and the hook sits flat, this allows it to sit nicely perched on any debris and goes into the carps mouth very easily allowing the hook to catch hold.

You will see in the above image that I use a long hair, fixed just under the bait are two Atomic tungsten sinkers with a small piece of tungsten putty moulded around them. I have found this rig to work very well using a stiff material for my hook-link, I currently use Krystons SYNX for my stiff rig setups, I highly recommend it, it steams nice and straight, sinks like a brick and is very abrasion resistant. 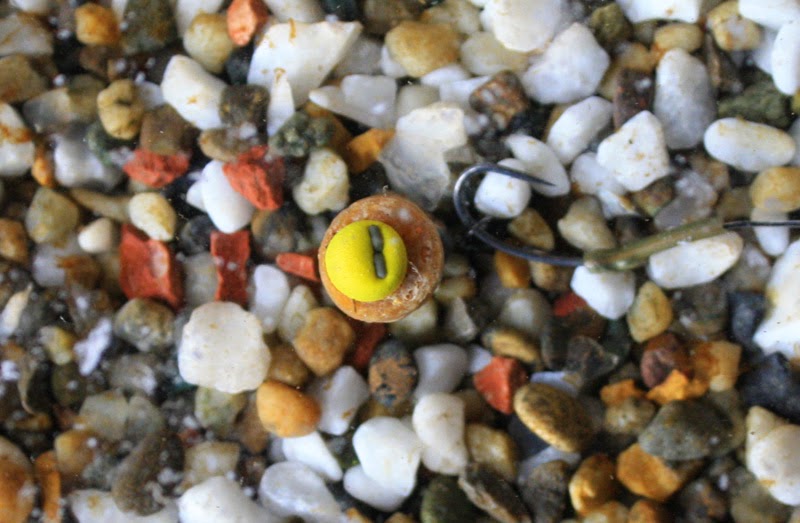 On my first session I arrived at the water for 2pm, by this time the sun was cooling off and I had time to get my baits on the right spots before bite time. I had chosen to fish a very narrow stretch of water. To me I call these kind of swims "Passing Traffic" spots. This is where you are fishing an area where you feel the carp will be patrolling back and forth to get to other areas of the lake. I had a lovely set of reeds to go at and a fair amount of surface weed, my plan was to get tight to the reeds and fish under the weed. Because I was so confident in my bait and presentation I decided to stick with fishing singles. 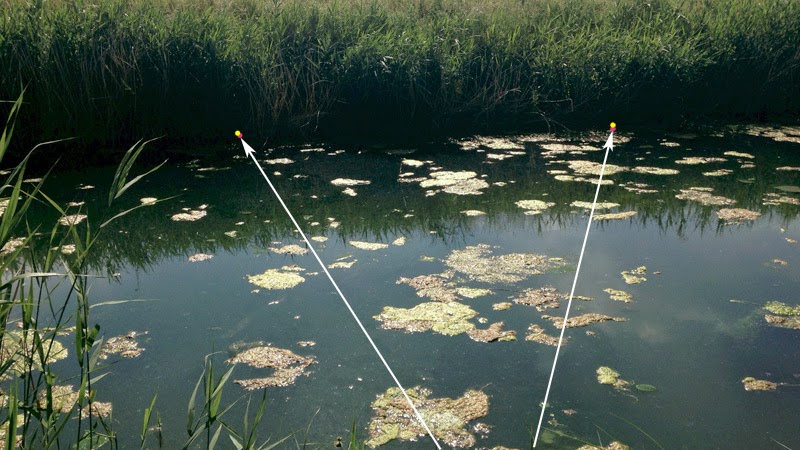 As expected things were slow, I got a few liners but there really weren't any signs of carp in the vicinity, then again there never really is. I think about an hour went by before my right hand rod took off, it was a spirited fight and through the crystal clear water I could see a lovely dark mirror racing around. I soon netted her, scales sunk to 14IB, it was so perfect looking without a mark on her. It was by far one of the best looking carp I'd caught in terms of its proportions. 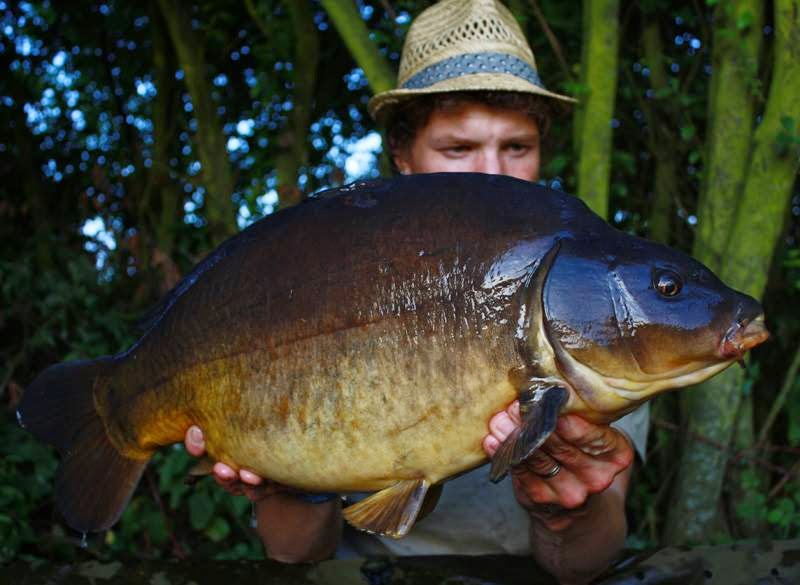 I got the rod back, I knew it was a long shot if I was going to have another, as expected the session evaporated away with no more action. I packed up just before dark with the plan on coming back the next day.

Just like the day before, I arrived mid afternoon and decided to fish the same swim. I knew both spots were good for a bite, this time I put a light scattering of bait over both rods to see if I could tempt more than one carp. My first take came really quickly, this was off my right hand rod, it tore away and the fish was taking some serious line. I was desperately trying to keep it away from both the weed and the snags. I didn't bother weighing her, she was long and lean, maybe touching double figures. 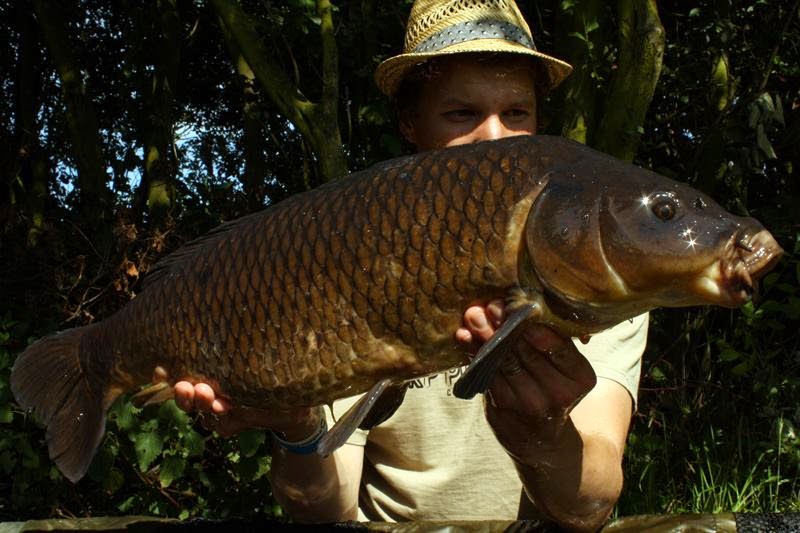 I slipped her back, because the take had come so fast I felt confident that I could nick another before leaving. The rod went straight back on the spot with a few baits scattered. The next bite came off my left hand rod, the fish kited down the channel, with a bit of side strain I managed to lead her back, once again the fight was hard, she soon tired, it was another perfect looking mirror once again weighing in at 14IB.

A Fish Off Both Spots 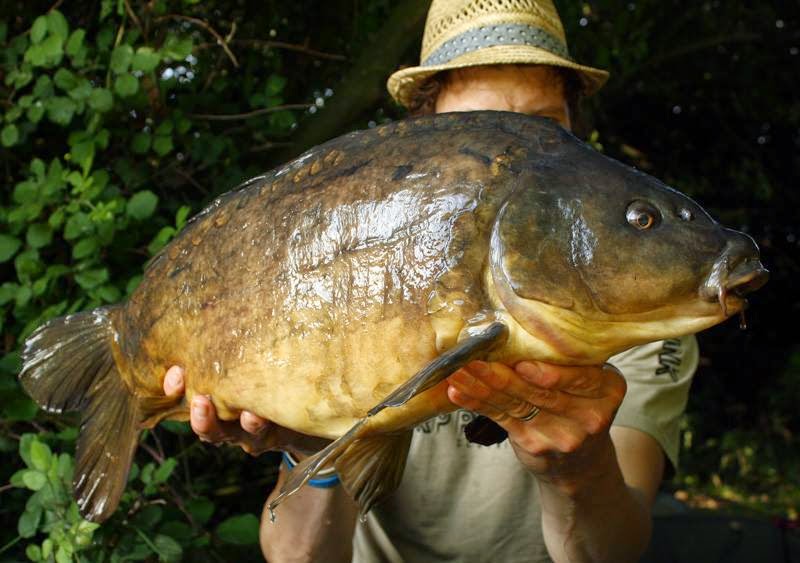 After putting her back I gave it about an hour or so and then packed up, I was very pleased to nail two. My plan again was to come down the following day, because that zone of water was working for me I decided that I would stick to fishing it.

Just like the previous session, rods were out by mid afternoon, because the conditions have remained consistent throughout the week I really didn't see the point in changing anything to do with my approach. The rods were quickly out on the usual spots, this time around I went back to fishing singles.

The baits had been in the water for about an hour before I got my first take. It was the right hand rod, this one was fished especially close to the reeds. It was another great fight and at the end of it I was surprised to be sliding the net under another sizable mirror, it was spotless and didn't even look like it had been caught before. 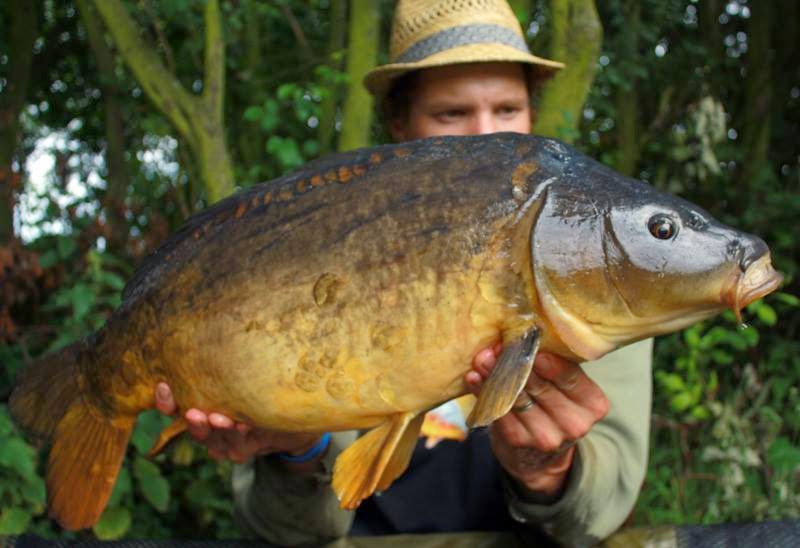 Once back the rod was straight out, again I managed to get it really tight to the reeds. Time ticked by and all had gone quiet, again it was a good hour before my right rod suddenly sparked into life. This fish gave me a run for my money, I soon slipped the net under what can only be described as a bar of gold.

A Bar Of Solid Gold 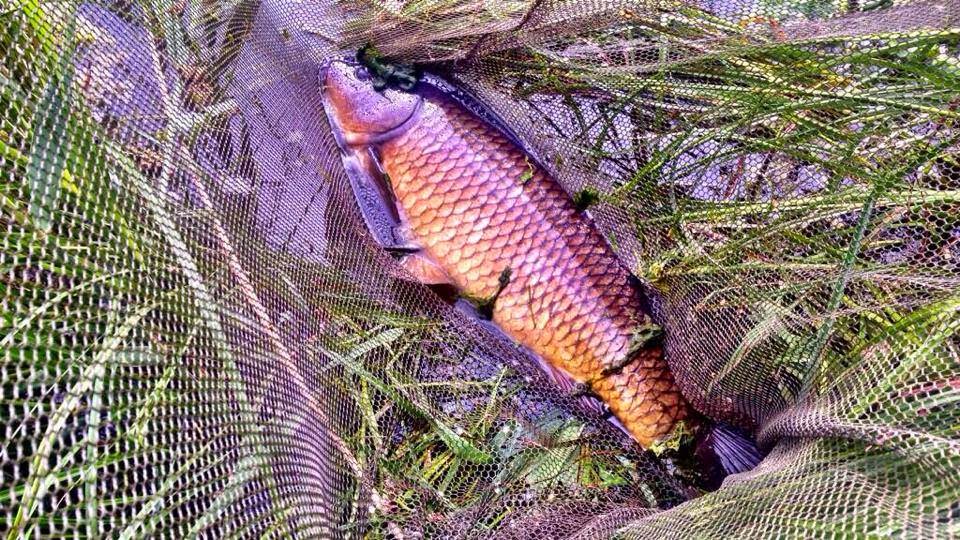 Even though this common was probably the smallest I'd had from the cut, I thought it was a pretty special fish, it was long and slim and I think one day it's destine to become one of the kings of the lake.

A Future King Of The Lake 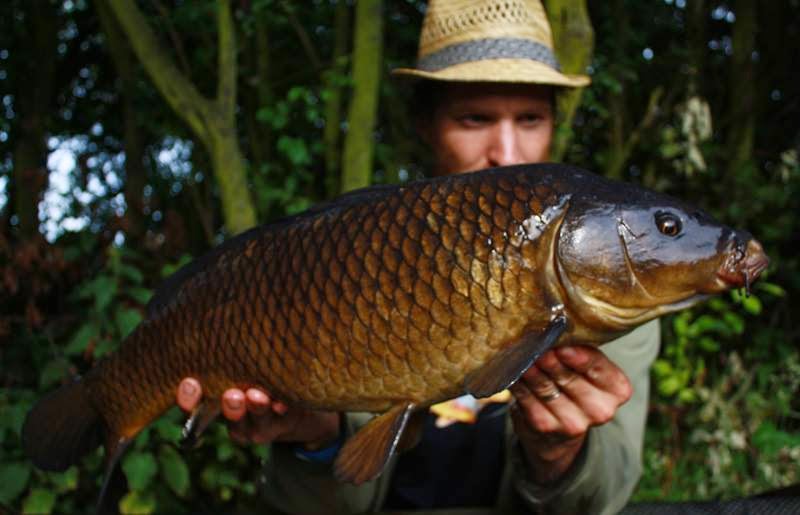 This common signaled the end of another good session, I was planning on coming back one more time. I wanted to do a short burst of sessions on The Cut because I was wanting to continue with my main focus, that being the Chelmsford waters. I have to say that my hunger has somewhat labored regarding Kingfishers lakes.

I really want some new challenges and I love what Chelmsford have on offer, I am finding that I really am connecting to the atmosphere of their lakes and they're stretching me in terms as an angler. I will always fish KAPS lakes but I think I need to pull away for a while to help me gain perspective and nurture a new enthusiasm. I find myself blowing hot and cold on some of my waters, hence why I fish so many at once, I need to keep thinking, changing and moving, me and my mind don't like being absent of a focus, complacency is something that I can't bear.

The conditions on my final session were very different to the previous ones and it had been at least three days since I was last down. It was a lot cooler, overcast and breezy. From past experience the fish don't seem to respond very well in these specific conditions. I decided I was going to fish a different stretch of water that was a little more shielded from the elements. 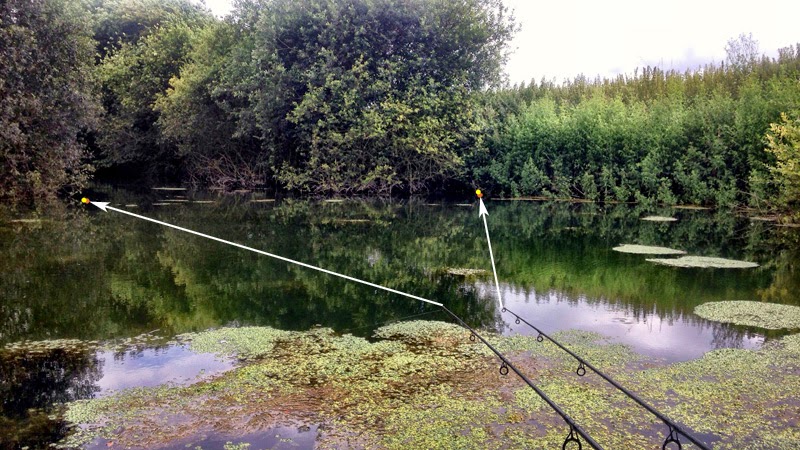 I picked a spot that I've always liked the look of, there was a bottle neck that looked like the perfect ambush point and a tasty looking margin to my right. Things happened very quickly once the baits were on the spots and the left hand rod literally went off minutes after setting the bobbins. As the take occurred the water exploded and a huge patch of silt and bubbles covered the area from where my bait had been placed.

As I lent into the fish there was nothing, no fight at all, at first I thought it was a bream. As the rig came back through the water I could see a huge pile of weed on my line and hidden underneath I could see a carp, I literally just netted it straight away. As I began to clear the weed I was shocked to find a nice fat mirror buried underneath and it was a fair size. It went 18IB 5oz on the scales, I was pretty shocked to say the least. 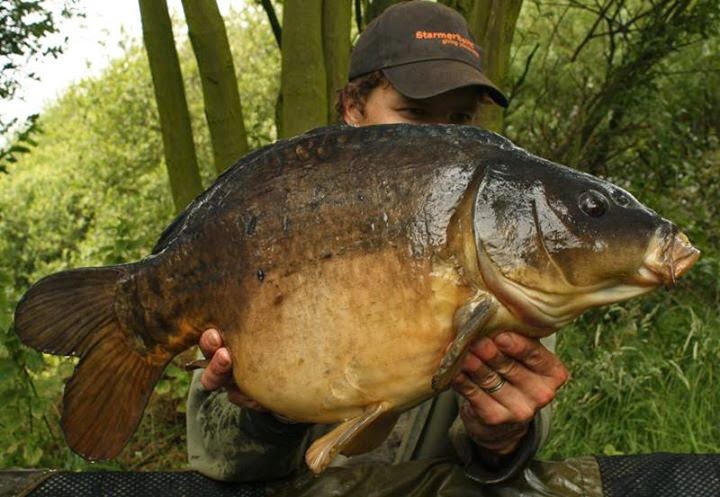 This fish encapsulated what these kinds of waters represent, it was perfect in every way with no one signs of damage, fin perfect, the mouth was huge and most of all it was a real surprise. If there's an 18IBer swimming around maybe the old tales of big commons aren't so far from the truth. At some point in the future I will head back down, but for now the itch that the cut was giving me has been temporarily scratched.
Posted by Charlton Carper at 03:40