Despite the gale force winds and heavy rain I thought I'd head out for the day down to The Stock Pond. The lake is blustery at the best of times because it's located in the medway valley. When I arrived at the water it was like being trapped in a wind tunnel. I decided I was going to approach the lake with two different prongs of attack. The first part of the day I was going to move both baits every 45 minutes to see if I could pick off a fish, if this failed I'd stick to my usual spots from midday onward.

As usual there was no signs of any feeding fish and the waves on the water made it impossible to see any signs of bubbles, it really was just guess work. In regards to rigs, I was fishing the POM setup on one rod and a line clip system on the other. In previous blogs I have mentioned that I dropped the line clip out of my fishing a good few years back. After testing Chris Knowlers POM leads I am starting to warm to the method again.

I was always dubious about how pinned down everything was when using lead clips. After a bit of work and a fair amount of trial and error I have found a series of rig components that allow me to fish with it confidently. Firstly the clips and tail rubbers I am using are the 'Carp Craze, Green Translucent Range'. I really find these blend in well on the bottom of most lakes I have used them on. Unlike a lot of clips on the market, this specific one has two positions you can slide the tail rubber to, both making it easy for the lead to slip off if the fish gets caught up in weed or any other snag. 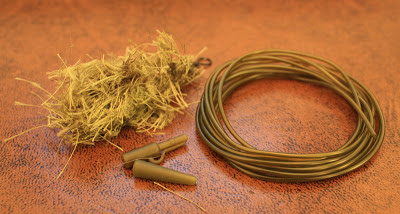 I favor position one because I feel the lead will release easier, the next element of the system that has always bothered me is the the swivel on the lead, I felt that depending on how the rig landed, the swivel may or may not allow the lead and a proportion of the tubing behind the lead to hug tight to the bottom. I got around this problem very easily, all of Chris Knowlers leads have swivels where the top ring is larger than the bottom one, also it's a thinner gauge so this gives the lead so much more freedom and versatility on the landing. An element of this may sound like nonsense but I feel it's relevant. 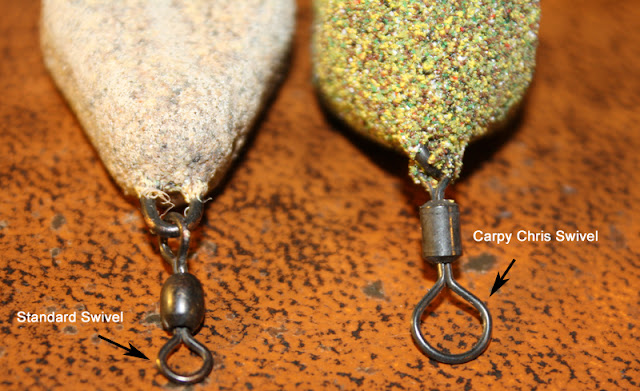 One of the leads that I am using at the moment is a 'Swivel Weed Lead' 2.5oz, the hook link is straight through fluorocarbon, with all these elements combined I feel I have a reliable and well presented rig. After doing rig checks in the margin I am very impressed with how it blends into the bottom, for me this is a major factor. On my other rod I was fishing the new POM lead that Chris Knowler has given me to work with, it's and interesting concept, you place a free running swivel on your hook link and secure it into the hole on the lead.

The POM Lead Is Designed To Take The Running Swivel 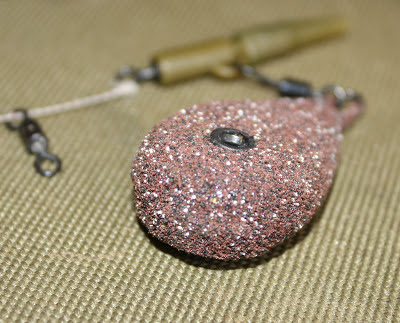 Push The Swivel Into The Specially Designed Hole 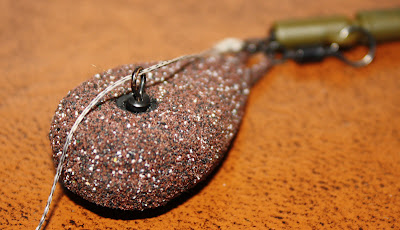 Once this process is complete you're ready to go, I am still in the middle of testing these leads. The main point that I really like is the hinge effect you get, it casts and lands like an inline, on the take the second swivel can release, if you're fishing in weed or snags the lead can then ditch. I also think that this system could stop the carp from using the lead to ditch the hook.

Like I said before, I decided to split the day into two approaches, the first approach I would keep both rods roaming, fishing bottom baits with small PVA bags, each bait will be kept in position for around 45 minutes at a time. My thinking behind this was the fact that if the carp were shoaled up somewhere I might be able to find them and pick a few off. I tried to cover most of the lake, the wind was really pounding, I made sure I fished my baits on both the back and front of it. 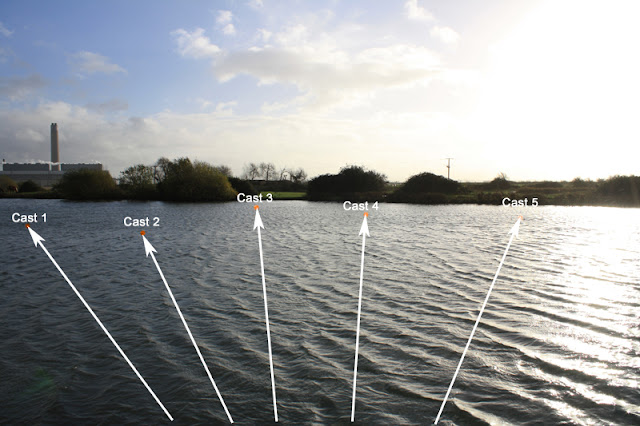 I was fishing Starmers White Chocolate on one rod and a combination of Octospice, Bloodworm & Tuna and Bio CP2 Amino on the other, I crumbled the Octospice up and mixed 10 mil CP2 Amino boilies into a funnel web PVA bag, I fished half Octospice and half Bloodworm & Tuna on the hair, dipped the bag in glug and cast it out. I planned to fish the 'roaming' method until 1:00pm and then I was going to fish my usual spots and keep them there until an hour or so after dark. 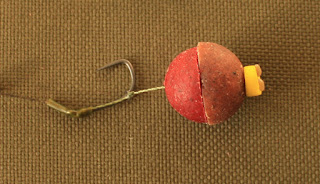 A few hours passed without a single beep, casting was tricky because the wind was gale-force, it was exhilarating being out on the bank in these conditions and I had a gut feeling the effort I was putting in would pay off. I kept very focused on my approach and tried to pick off a fish. The morning came and went without any action, no fish were showing and my roaming approach wasn't proving fruitful.

For the rest of the day I decided I was going to fish my usual spots, re-baiting, putting fresh bags on and then just sitting on my hands, I was starting to feel a little brow beaten but was determined to stick it out. The heavy wind continued all afternoon, I was sure one of my rods was going to produce, even though the weather was ruthless it really wasn't that cold, if it had been a chilling wind I most probably would of thrown the towel in. 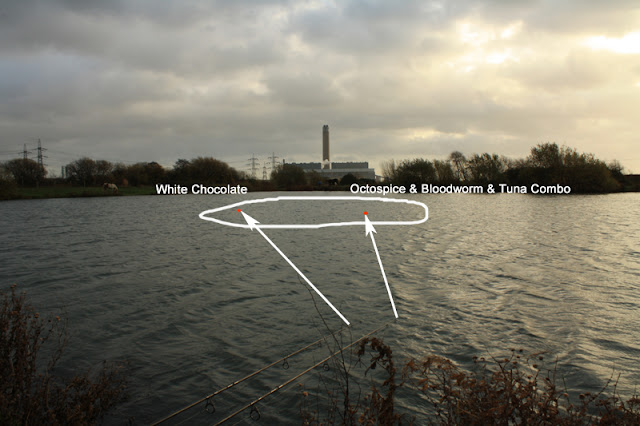 By this time the light was starting to go, another hour or so passed and it was pitch black, the only light was from my bite alarm LEDS which were firing off with the gusts of wind. The breeze dropped a little later on and things took on an eerie silence, all of a sudden my right hand rod tore into life, I lifted into the fish, luckily I had put my head torch on other wise the dash for the rod would of resulted in me falling in the lake. The fish was powering around and had a fair bit of weight to it. As I got it closer in, a big mirror surfaced out of the darkness filling the shaft of light my head torch was producing, it was a decent fish. I kept the pressure on letting her take line when required, after a fair scrap I slipped a fat looking mirror over my net. I was so pleased I managed to bag one, scales sunk bang on 20IB. I really felt I deserved this fish, it had been a testing day. 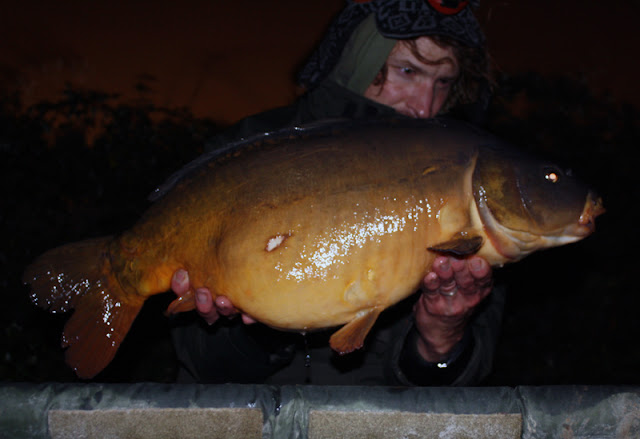 She had a few old battle scares so I applied some klinic got my photos taken and then slipped her back to fight another day. I was tempted to get the rod back out but the weather was taking a turn for the worst with some rain now starting to set in. The day was one of those sessions where it would of been easy to just stick with one approach and sit it out, I am glad I tried something different and will no doubt take on the water in the same way again. Next time it may bring with it better results. With winter closing in and temperatures dropping things are going to get real tough but I have got to say that I am up for the challenge. There's a lot to learn during the colder months and getting out on the bank is still as important as ever. Carp may not feed as much but they are still catchable.
Posted by Charlton Carper at 04:49