Back Down The Farm 'Again'

I really like fishing Bax farm, there's some really nice fish in the specimen lake and I am slowly starting to get pretty consistent results. It's a weird water because in theory it really isn't that big but the carp are fussy and pretty wise. From past experience I am starting to feel that it's a fish meal water because my fruity boilies never seem to produce.

I decided I was going to fish Starmers monster squid over a bed of hemp tight in the margins. It's strange because through all the years I have been fishing, there are certain lakes that are fruity and others that seem fishy, when it comes to bait flavours, it goes without saying there are a lot of lakes that go for both.

Before setting up I took a long time walking around and watching the water, the fish here rarely give themselves away. I have come to believe that they shoal up and move around the lake in groups at specific times of the day, I think I've mentioned this in my previous blog posts about the water. They seem to come on the feed late afternoon and mid evening, if you're lucky you can bag a few during the day but you've really got to be on the fish.

In regards to approach, fishing over a bed of particles or method mix seems to work well. I've had some very quiet sessions down here, on the flip side I hit a point in the evening where I've had up to eight runs in an hour, it really just depends on the conditions.

All three rods where set up with my in-line pear prototypes and bottom baits on a blow-back rig. My left hand rod was to the left of me under a willow, the middle rod was tight to a reed line in a narrow channel and my right rod was in my secret spot tucked underneath the bank by hand really close in. I stuck it into the silt literally underneath the swim, I placed two hand fulls of boilies with hemp and corn around it.

Placing The Bait By Hand Underneath The Bank 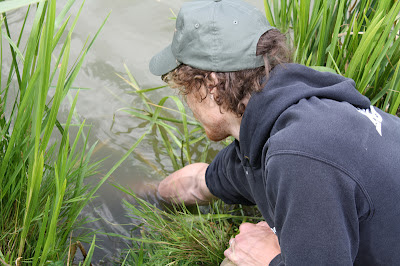 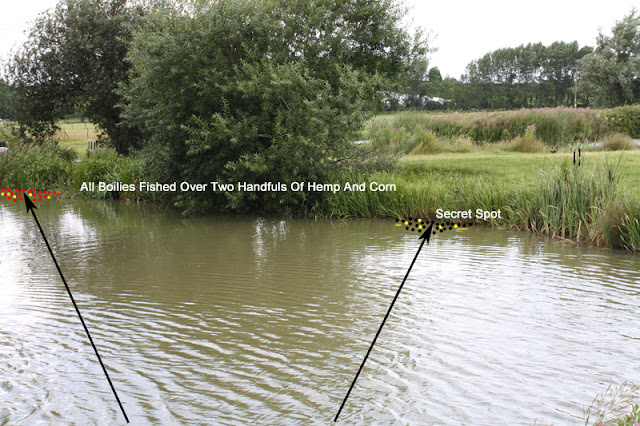 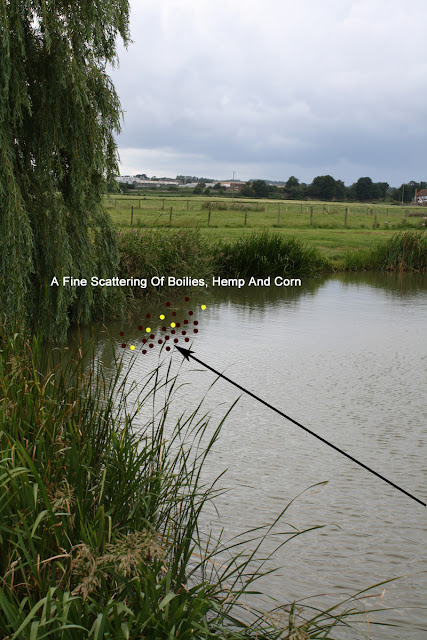 I felt confident in all my spots, I had a feeling that I wasn't going to see much action during the day. The lake is very open so it gets very windy, the wind was blowing into the bay that was over the back of the island in front of me. I felt a lot of fish would be hauled up in this specific part of the lake, I couldn't fish there though because three anglers pretty much had the area covered. I just needed to sit on my hands and be patient.

Me And Eric Waiting For The Runs 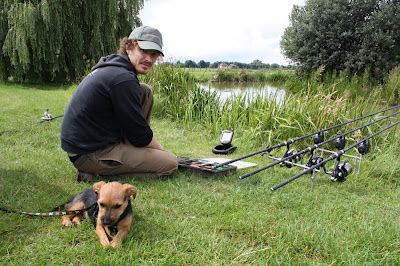 Throughout the day I was introducing around 5 baits every hour just to keep the swims topped up, I didn't bother recasting, I do try to keep swim disturbance to a minimum. The morning came and went without any real action, also there wasn't really any signs of fish in my area. The guys fishing on the front of the wind had a few fish out so that confirmed my theory about where the carp were hauling up.

I know they visit the bay I was fishing, the secret is patience. A few more hours went by, all was pretty quiet then suddenly out of the blue early afternoon my secret rod spot went firing off. I lent into the fish and it started to strip line fast, I guided her into the middle of the bowl in front of me, it really woke up underneath the rod tip. After a modest fight I slipped a perfect looking mirror over the landing net, scales sunk to just under 14IB, it was a solid bodied fish and was perfect looking. 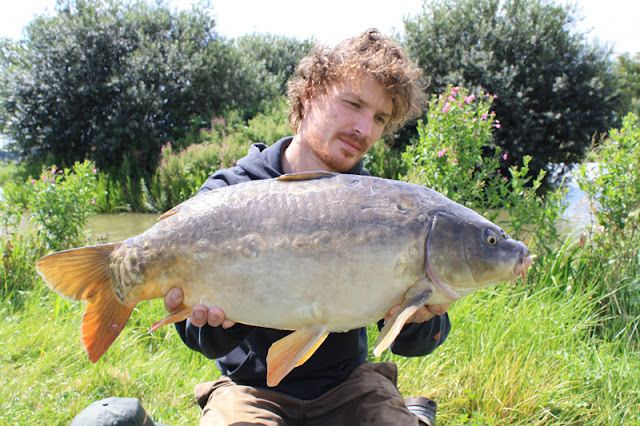 I was well pleased with the result, I got my rod back out on the spot as quickly as possible. I decided to add a little extra to the swim to help with attraction. I mixed up Starmers 'Carp Red' with some green lipped mussel pellets thrown in, I mixed it up nice and sloppy and then added some boilies, a few handfuls were dropped over the baited areas. From past experience I've found the carp on the farm respond well to a bit of ground bait. 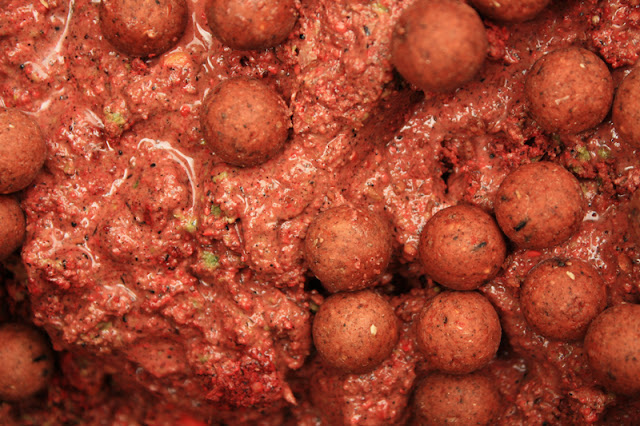 As the afternoon passed I started to notice a few carp where starting to top nearer to the bay area, they were starting to move into my part of the lake, I was feeling very confident now. All of a sudden my middle rod sprung into life, this was the rod fished in the margin of the channel to the right of me. I lent into the fish and guided her my way, she really woke up underneath the rod tip and was determined to snag me in the marginal reeds. I managed to guide her over my net, it was a lovely looking common, I slipped her into the weighing sling, scales sunk to 12IB. Her propotions were amazing, she's going to be a real big fish one day. 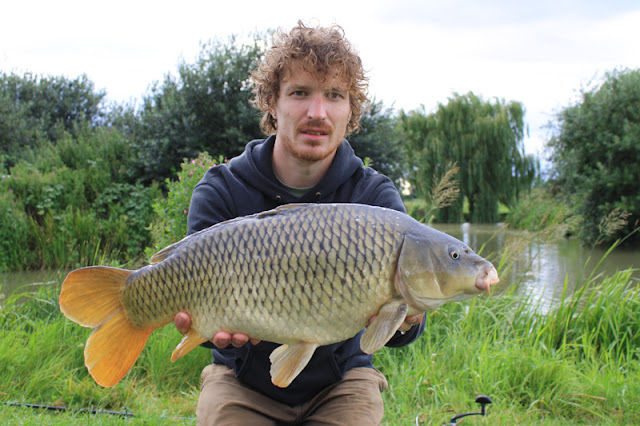 I gently slipped her back and got my rod straight back out, topping the swim up with a fair amount of bait, I had a feeling that most of it would have been hoovered up by now. The evening came and my spots had gone quiet, I could still see signs of fish near me and was expecting to get at least one more run before I left.

As the sun slowly started to set I got an absolute screamer on my middle rod, a huge swirl kicked up erupting the whole margin, I rushed to my rod and lent into the fish, it was stripping line something rotten, it felt heavy, as I applied the pressure the hook slipped, I couldn't believe it, I'd be done again by yet another big girl from the farm. As I reeled in and looked at my rig everything seemed to be fine but I did have a bit of debris masking the hook. I am thinking when I put my back-lead on it may have dragged the rig back a fraction.

A few hours past and everything remained quiet, I kept my rods on their spots without recasting, I decided I'd start to slowly pack my gear up. The light was fading fast, just as I was about to reel my rods in, my middle one shot into action. I rushed to the rod and lent into the fish, it was racing up the channel, I had to apply a fair amount of pressure to guide her my way, as usual she really woke up underneath the rod tip, they all seem to do this. I was trying to hurry her in because the light was fading fast. Eventually she gave up and I slipped another lean looking common over my net. Scales sunk to 14IB, I was really happy, 3 fish and one lost is pretty good going for the farm.

'Sorry For The Blurry Picture, it was pretty dark' 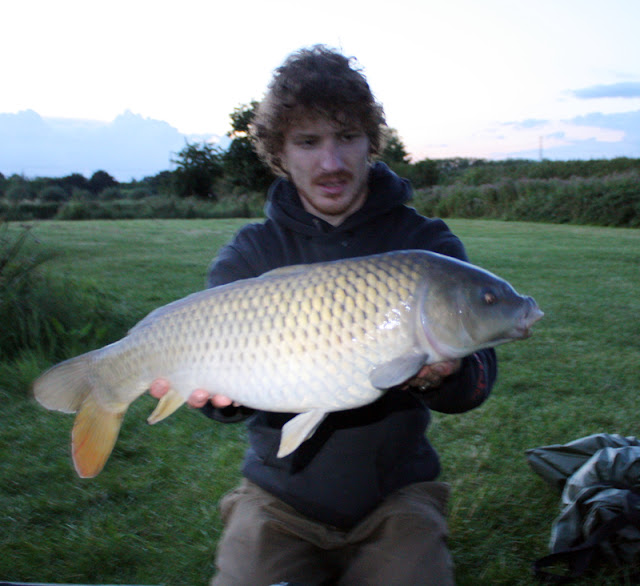 All in all it was a pretty successful session, I am still determined to find where the majority of the fish hold during the day, it really does seem they group up, as I stated before, all fish were caught on Starmers monster squid fished over a little hemp and corn.

The Sun Closing A Solid Session Down On The Farm 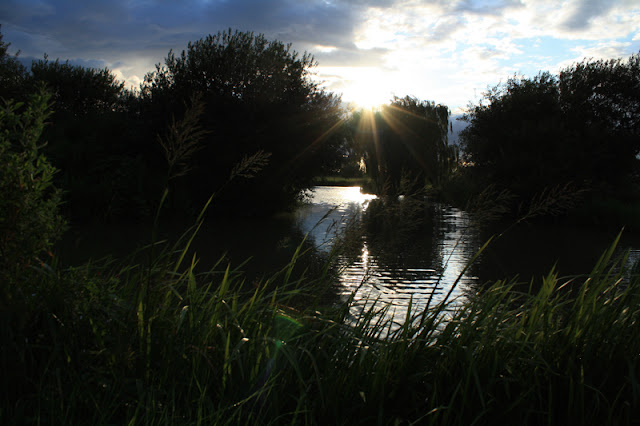 Posted by Charlton Carper at 00:17