Back Down The Farm 'Rooting For A Bite'

I made the decision to take a trip back down to Bax Farm Fishery again. I am very determined to get some of the big girls out, I know I've hooked at least one but haven't managed to land anything over 16IB. The lake is tricky, it's really not that big and has so many channels and features for the carp to hold in. The stocking is pretty impressive with an estimated 300 carp in the water.

I find this pretty amazing considering you can go down for 24 hours and only bag two fish. I have fished it a lot now and I am convinced that the carp shoal up and patrol around the lake in groups, they definitely have a path they follow and can be located on this route through certain times of the day. I've always had most my action mid to lake afternoon, especially around the right hand side of the second island, they seem to move in around 7:30pm onwards.


Getting My Control Station Prepared 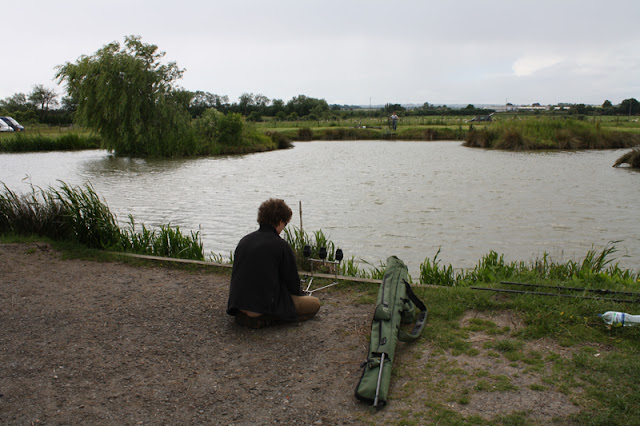 Because the wind was hammering down into the bottom right hand corner I decided I would fish one rod off a small island, my spot was at the bottom of a steep shelf that dropped from 1 1/2ft down to 3 1/2ft, my next spot would be in a channel in between two islands and then the third down to my left underneath a willow tree. 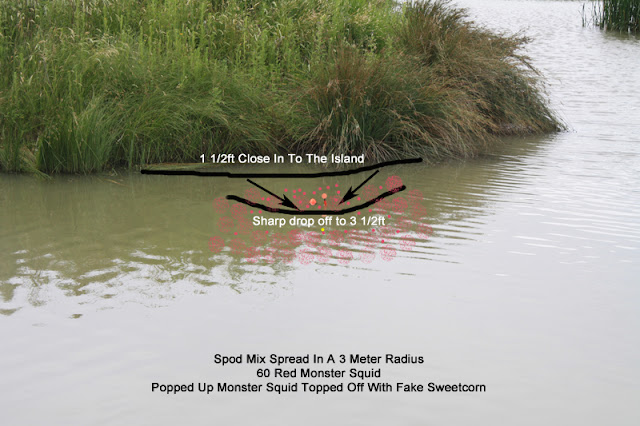 There was a nice calm spot off of my island rod, I spodded out my mix tight to the marker and carefully spread it in a three meter radius of my hook bait, my mix was Starmers 'Red Carp' mixed with their 'Green Lipped Mussel' method mix, I added some corn and hemp with Starmers 'Chilli Hemp' glug. There was a lovely slick on the surface of the water as my mix went in. 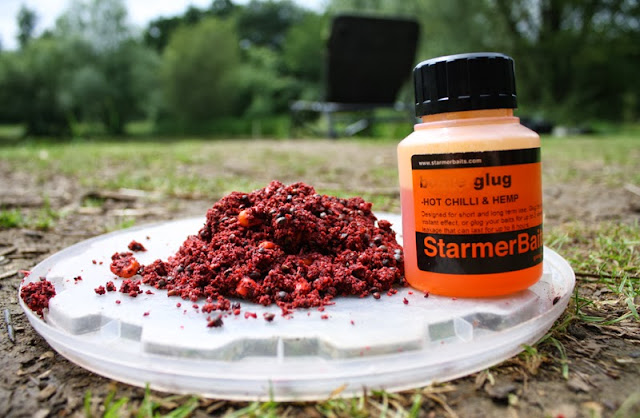 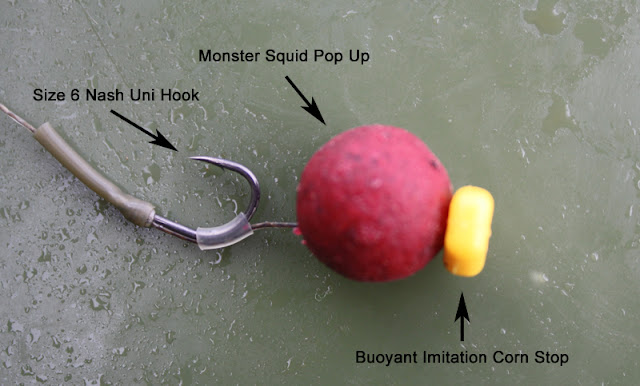 My Second spot was in about 3ft of water, I baited the whole channel with Coconut & Halibut, I was fishing a bottom bait topped off with fake corn with 10 large spombs full of hemp and corn all around the baited area. I cast my bait just off of the baited area. I feel fishing off of a big bed of bait can tempt the fish that aren't comfortable sitting in one place scoffing. I had never fished this channel before and felt very confident that I was going to get a take. 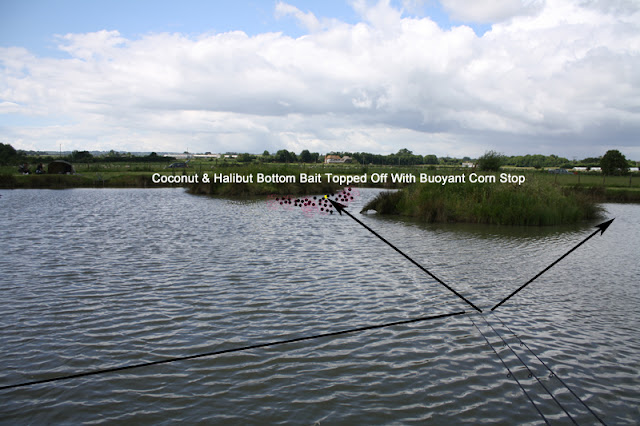 My third spot was just to the left of me fished in the margin tucked under a willow tree, it was near the bridge that divides the lake, I was hoping I could intercept any carp passing through from my side of the lake to the other. I was fishing a popped up Coconut & Halibut boilie also topped off with fake sweetcorn. 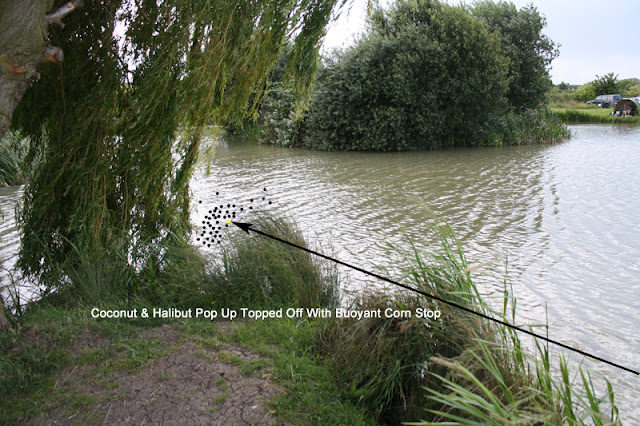 I spent a while getting my three spots sorted so it felt good to take a seat and wait to see if my effort would pay off. I felt confident in the positioning of all my baits, now it really was just the waiting game. I sat watching the water and as expected no carp where showing themselves, they always seem to give themselves away around 4:30pm onwards.


I decided to get a 'fourth rod spot' going, I chose a set of reeds tight down to the right of me, I introduced tutti frutti boilies throughout the day every 45 minutes. Every so often I would crawl over to see if I could see any movement or reeds banging, I deliberately threw my baits in the reeds, this way I'd know if the carp had moved in because they'd been banging the reeds around whilst seeking out the bait.

A good few hours passed with no sign of any carp in or around my spots, I decided I'd continue to sit on my hands and just wait it out, I knew at some stage a group of fish would move through the channel and around the islands, I believe the areas I'd chosen were definitely within their usual patrol route. 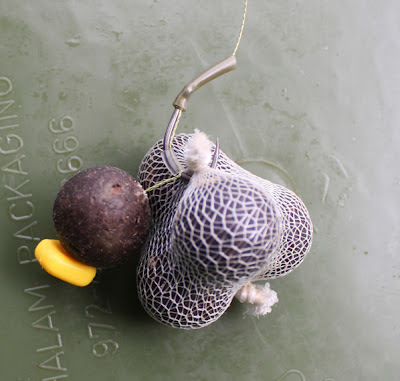 The hours were still passing without any action, the positives was the fact I was getting a few liners, I decided I'd go for a quick wander to see if I could spot any carp elsewhere on the lake. I left my wife with my rods. I only walked a few meters away, it was very windy. As I was checking a few other spots out I thought I heard my alarms but didn't take a great deal of notice, as I headed back to my swim I saw my wife struggling with my rods, apparently the two island rod has gone off at the same time. My right hand rod had tore off and the fish had slipped the hook which was very annoying, my middle rod was still rattling. I lent into he fish and managed to guide it out of the channel, the fish put up a good scrap, after a short fight I slipped a lovely looking common over my net, scales slipped to 13IB 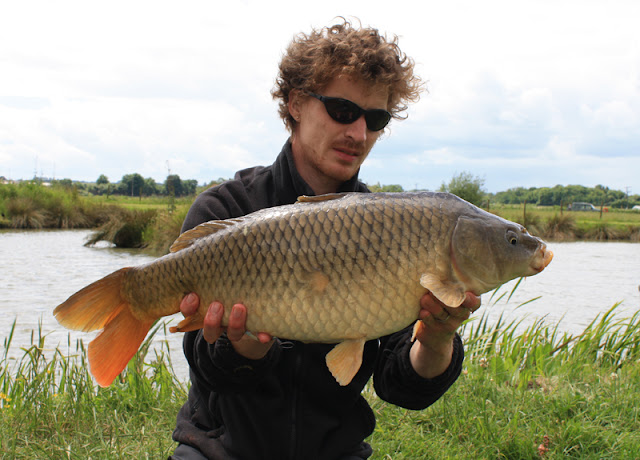 I was really pleased, but slightly annoyed with the fact that I'd gone walking off. First rule "Don't Ever Leave your Rods". I got both my rods back out on my spots, topped the swim up with my mix and free offerings. Two takes at once shows that the carp really do move around certain areas of the lake in a group, this is not the first I've had a double take out of the blue on this water.

My Mix In The Margin, It's Perfect. 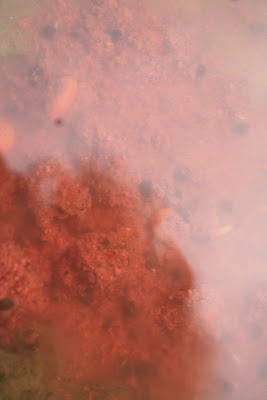 The hours ticked by and I started to feel that the fish had been and gone, there were no shows over my spots and my 'fourth rod spot' wasn't giving out any positive signs of being investigated. Late afternoon I decided to reel my rods in and take a walk around the lake to see if I could find any feeding fish.

I was lucky because by this time most other anglers had packed away and gone home. This gave me a lot of options, I managed to find a group of feeding fish in a small bay on the back of the wind, this surprised me because a fair few lines had been in that part of the water earlier in the day, once the lines had gone they'd obviously moved in. I rushed back and got my gear together with the plan to just lower all my rods really close in the margin.

My Swim After The Move 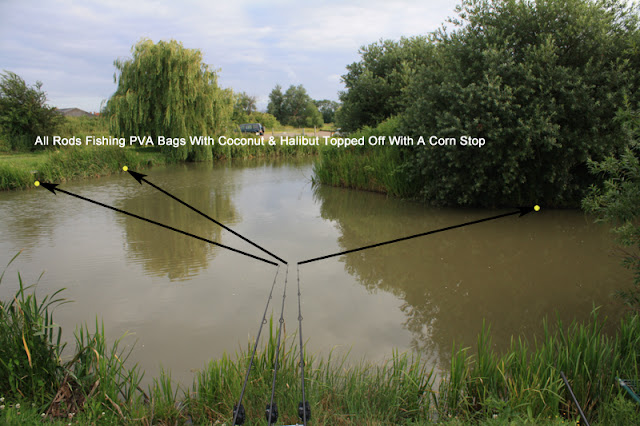 Before I even managed to get all my rods out my left one had shot off at great speed, I lent into the fish and tried to guide it towards me without disturbing the other carp that were obviously feeding in the swim. I got her underneath my rod tip and let her circle until she was exhausted, then all I had to do was quietly slip her over the net with minimal disruption. It was another common, scales slipped to 11IB. 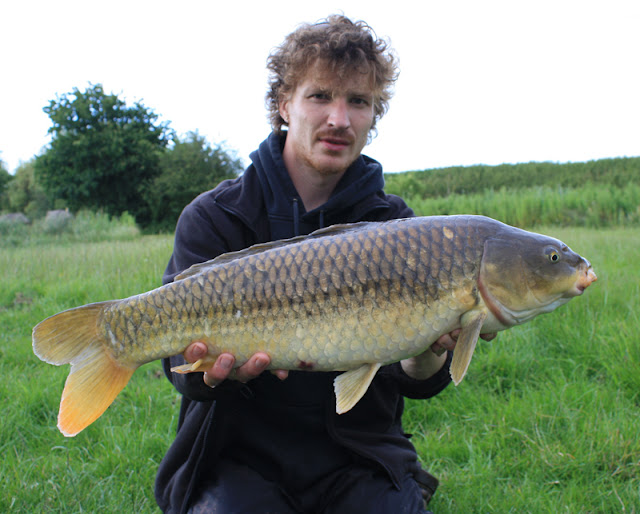 By the looks of things there were still fish feeding in front of me so I walked the rod back round to the same spot and lowered it gently in. All my rods were now out and I stayed low to the ground, the fish were slowly moving around the channel in front of me.

Before I knew it my right hand rod rattled off again, I made contact with the fish but there was a big reed stem on the hook-link which unfortunately dislodged the hook. This was something totally out of my control, I felt this could of spooked the swim because the carp darted towards the other feeding fish, I saw a few vortexes from where they all bolted.

Putting the rod back in position I sat patiently but felt like the moment had passed, also a couple of anglers turned up and started casting close to my spots from the other side of the island which wasn't helping the situation. By this time it was getting pretty late so I decided to call it a day. The move paid off and I am thinking that I will do a mid-week day where I can move swims every hour to see if I can start to figure out the carps patrol route and what spots work at certain times of the day.

Before I left I had an idea, I pulled my sleeve right up and put my arm into the water right in the margin, I could feel that the margin actually goes a good foot underneath the bank, theoretically under your feet. Next time I go back I am going to take my rig and bait and place it underneath this ledge by hand, pretty much burying it into the side, I am very curious to see if this is going to work. I've seen carp moving so close in and this tactic might end up tricking one of the special fish.

Posted by Charlton Carper at 02:19