Burrows 'Echoes From The Valley' Part 12

Five days had past since my last session, due to the result I'd had on my previous trip I was itching to get back down and pick up from where I'd left off. Waking on the morning of my trip I was met with bright sunbeams spearing themselves through a gap in my curtains. As I pulled the blinds up, those same sunbeams moulded into one giant 'asteroid' of light, it took my eyes a while to adjust. I was still half asleep, there's something strangely satisfying inhaling the air of a new day when you aren't fully awake. After shaking the cobwebs from my head and having to acquire the assistance of two rather large cups of coffee to wake up properly, I started to sort through my tackle. Everything was in good shape, fresh rigs had been tied, PVA nuggets had been replenished and I'd swapped my rods over from my 3IB Ballistas to my 3IB Mirage. The Mirage blank is what I'd call a true 'through action' rod, it's literally a spiritual experience playing fish on them. To go with that, the blank is a lovely chestnut color that has subtle green whipping down by the handle. When I'm fishing with these rods I'm not so much casting but sketching with my rig and bait onto the landscape in front of me. Having amassed a rather large collection of Bruce Ashby & Sportex rods, I find myself rotating what I'm using on a regular basis. Both Bruce Ashby & Tony Fordham rods are something special, each has its own unique action 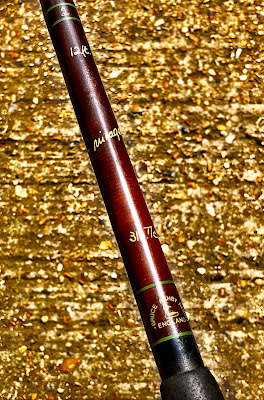 I arrived at the water around 11am, making my way down the woodland path to the 'bottle neck' swim, I was semi apprehensive, I was hoping it was going to be vacant, sure enough it was. Deep down I knew it would be but I seem to have a habit of attracting 'sods law' when I least expect it. The swim looked great, the water was a lovely emerald color and there was an inviting chop coming down from the cages. I had visions of carp hitching a ride on the wind, sailing down the main body of water and then 'squeezing' single file through the bottle neck where they'd come across my bait. I was hoping that all this visualization was going to harvest a result. With my swim set up and my rods rigged and ready for the chuck, I made two measured casts. Both rods were going to be fished around the same areas as my previous trip. The placement was going to be the same, the rigs were also the same. The only thing different was the bait, instead of the tiger-fish I'd opted for 'garlic sausage'. The reason for the bait change was simple, I'd found a small bucket of garlic sausage that I didn't know I had. It's a killer bait and I thought I'd empty the whole bucket into the swim during this session. 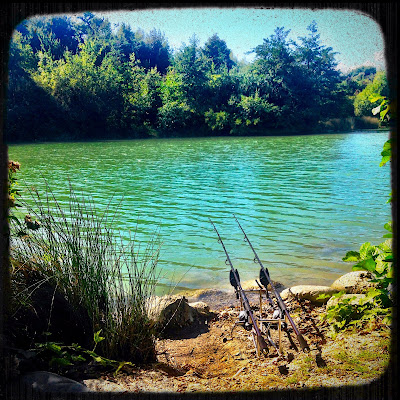 As explained last time, piling the bait into this specific part of the water made complete sense to me. To attract the carp down to feed, there had to be a big enough spread making it literally impossible for a passing fish to not come across it. There are many occasions within my fishing where I operate on 'gut-feeling' alone, and this was definitely one of those occasions. I got my 'short range' throwing stick out and littered the whole swim with 'garlic sausage'. My confidence was sky high, the conditions looked spot on and I knew that the carp weren't going to pass up the bait, the 'garlic sausage' absolutely stinks. Both rods went out perfectly, there was nothing left to do other than set the rest of my swim up take a seat and watch the day play out. I was going to keep my eyes firmly on the water to see if I could spot any signs of fish feeding when/if they move in. 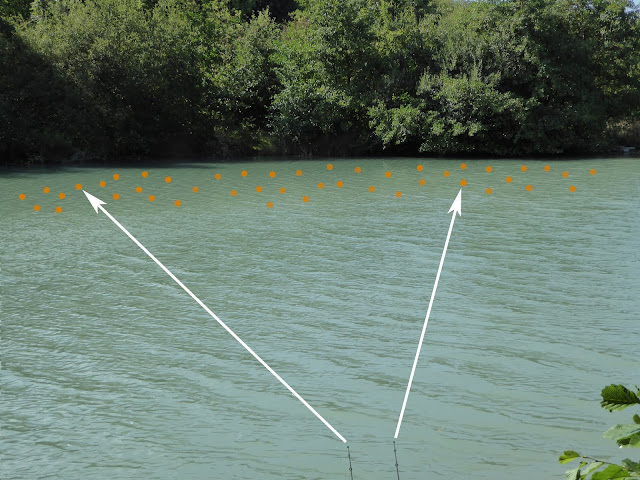 By the time the initial 'faffing around' had been done it was approaching 1pm, realistically I didn't expect anything to happen until a little later on. On my last session bites came relatively quick but that was because fish were clearly feeding in the area when I arrived. I sparked the stove up and got the kettle on, a nice strong cup of 'Colombians' best was concocted and thoroughly enjoyed whilst I sat surveying the swim. There was still a constant breeze pushing through and down towards the 'muddy double', I knew it was just a matter of time before a few fish would be passing through. I got my binoculars out and started scanning the swim meticulously, I was looking for any tell-tale signs that fish were starting to feast on my 'michelin star' offerings. After a good 10 minutes of anal observation it all appeared very quiet. 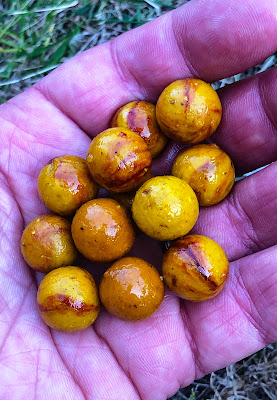 Over head the clouds flew through the sky at pace, periodically the warmth of the sun would beat down on my face. I had the whole lake to myself, for the first time in a long time I felt pretty balanced - this is no easy feat. As the afternoon slowly ticked on by I started to receive a few nudges and knocks off of both rods. It was clear that a few fish were obviously moving through, a vague feeling of excitement started to work its way through my body. Scanning the swim again with my binoculars, there still weren't any sure signs of fish action. The liners soon ceased, for good measure I decided to top up the swim with a few more fresh baits. Was I overfeeding? - no I don't believe I was, Burrows has always been a water that I've used a lot of bait on. If I'm fishing the obvious areas, close to the overhanging trees or tight to the margins. I don't tend to use as much because you can pretty much guarantee that carp are going to be patrolling these spots at some stage during the day. On spots that aren't so obvious, open water etc, I look upon creating a feature with the amount of bait I use. There are many waters that I fish where you couldn't get away with doing this, on Burrows I knew I could. 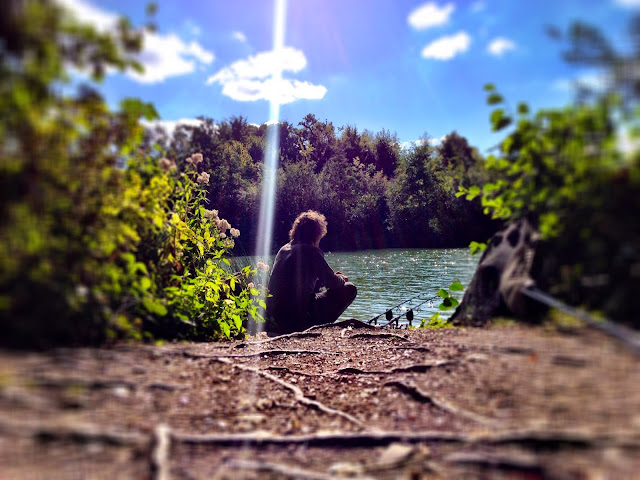 The afternoon continued to pass and come 3 o'clock I really felt like something was about to occur. I started to receive liners on both my rods again, only this time they were accompanied by streams of bubbles, mainly over my left spot. Fish had moved in and it looked like they'd come in numbers, multiple patches of silt and bubbles starting breaking the surface. Seconds turned into hours, the left bobbin was fidgeting up and down. I was paranoid that the fish might spook off the line so I decided to slacken it right off. Judging by the positions of the bubbles the carp were mopping up the freebies and were only a short distance away from where I placed my hook bait. I sat with my eyes literally crawling down inside my binoculars, slowly and surely the bubbles edged closer and closer to where my hook bait was sitting, still nothing happened. Had they sussed the rig? Was the bait presented OK? - questions started leaking into my head. And then ...... bleeeeeeeeeeepp !!! the alarm screamed, the rod tip was bending beyond belief and the clutch whizzed.

Lifting the rod up and turning the handle to engage the bait-runner, the rod arched round into a perfect curve. I balanced my attention between playing the fish and admiring the proper through-action that the 'Mirage' possesses. The carp was powering down using the depth of the water to its advantage, I let it take line when needed and pretty much let the rod do the rest of the work. As I slowly eased the fish closer the reflection of the sun on the water was near blinding, I couldn't see a thing. I slowly peeled some line off of the spool and precariously walked backwards to grab my polaroid glasses, they were just about in arms reach. I then reeled in the slack frantically and continued the task of trying to land the fish. Now with the glare off the water, as the fish came in close, I could clearly see it, the suns rays reflected off its scales. It was a beautiful looking mirror, it had a charcoal grey back, a white belly and scattered scale patterns. Once again it looked like Burrows was going to reward me with another unique looking fish. It slowly tired, slid up on its side and casually drifted across the waters surface into the net. 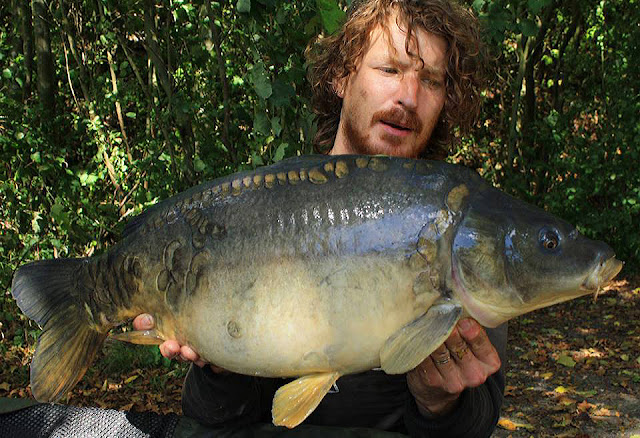 Once in the net a huge amount of relief washed over me, it was now time to take a proper look at my prize. This was a beautiful carp, the combination of the grey and white, along with the scattered scales gave this fish a very unique look. This was, without a doubt, one of the best looking mirrors I'd caught out of Burrows. After a few quick photos I bid her farewell, I had a few hours left so I got the rod back out. I didn't go crazy with the bait, I applied a few handfuls, set the bobbin and took in the remains of the day. Nothing else occurred, I was happy though, I'd managed another fish from a section of the water that I'd struggled with so many times before. As the sun started to set I got all my gear together and made my way home. My mind was already thinking about my next session - "carp fishing, it's a beautiful obsession".
Posted by Charlton Carper at 03:48