"Before I start this blog I'd like to point out that this post is not some hard sell on a supposed "new wonder bait", in my mind there is no such thing. I am simply documenting both my thoughts and the results. Bait is such a strange subject, I would never endorse or write about anything that I didn't truly believe in. I would also like to point out that I don't get paid to plug products, it's all about the angling for me and staying 100% true to myself".

It was about a week before I could get back down to Blunts, once again it was a short afternoon session. My work had been nuts so I had to fit my fishing in whenever possible. Between sessions I'd managed to pop down to see both Ian and Gareth at the Starmer factory, there was a whisper of a potential new bait and as usual I was eager to check it out. Lots of ideas are always being worked on but it's a slow and focused process to get them to the point where they can start to be tested and eventually put on sale. 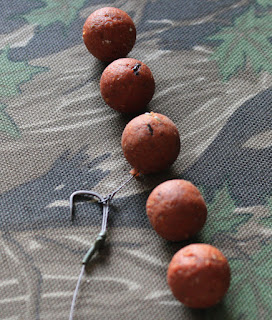 Trying new bait is something that I love doing, I actually love everything about bait, I find it all very interesting. When trying out something that has no history you have no fixed ideas or expectations, it's your job to get out there and fish well, conclusions and assumptions come later. This is where confidence in your own angling ability comes into play, you don't sit behind your rods wondering, "will this bait catch", you attack it full on and know it's just a matter of time before "it does catch".

Because I very much believe in, and trust both Ian and Gareth's knowledge on what makes a quality bait, I don't really have to think anymore about it, if they say something's good, then I know it is. This frees my whole mind up to focus solely on the task at hand, which is, putting fish on the bank. I never go over the top with plugging and pushing "said product" by any of the companies that I'm associated with, there's way to much of that happening nowadays, but I do believe you've got to give credit where it's due. 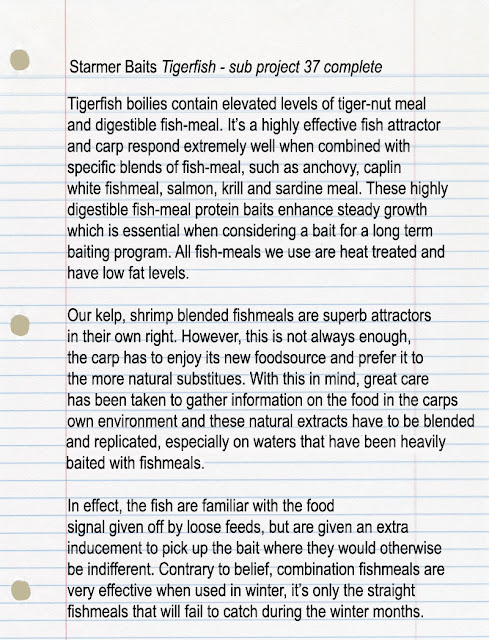 On the day of the session I arrived at the water for about 2:30pm, it was hot and very busy. A vast majority of the swims were taken, I took a slow walk around, chatting with a few anglers along the way. It sounded like the lake was fishing pretty slow, I wanted to try and find a quiet spot, ideally with no anglers either side of me. I chose to fish half way up the narrow channel that leads up to the right end of the water. 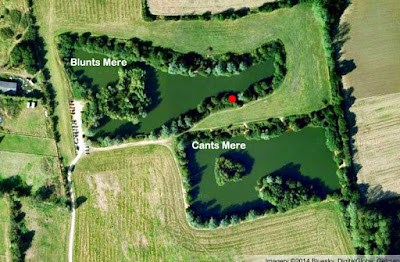 This area was free of lines, there was lots of shade and I thought it was going to work as a great ambush point. The plan was to bait heavy and hopefully attract and hold any fish that might be passing through. I've fished this swim in the past and its always been productive.

One rod was going to be positioned directly in the centre of the channel, the second rod would be positioned just off a sunken bush on the opposite margin. During the session I was going to gradually pre-bait a spot just down to the left of me. The margins are deep and I know that the fish do patrol literally underneath your nose.


View From The Swim 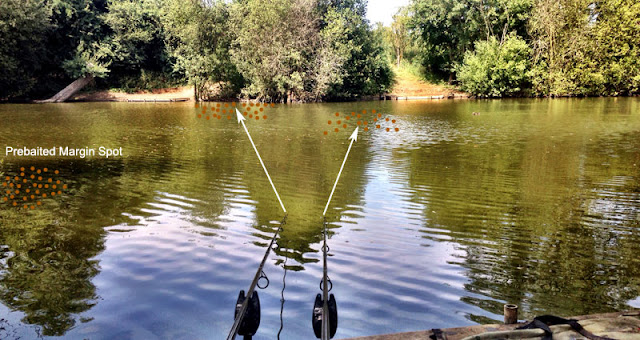 For how hot it was, there were no signs of fish on the surface, I put this down to angling pressure. When you've got bow-tight lines strung across every inch of water, I truly believe it can switch the carp off. Add bank side noise and activity into the equation and I think it can kill a lake outright. This is where your own stealth comes into play, I've mentioned it many times before, but "silence" can be a huge advantage, it's something that I've been mastering for years, which is ironic, considering I play the drums.

On those days where waters are busy, I feel the fish tend to move away from pressured areas, if you've managed to set your traps with little to no disturbance, and you continue your session making an effort to mute your presence. I fully believe this can up your chances of getting a bite, especially when those around you are being loud.

For example, nothing gives you away more than hammering your bank sticks in, Blunts has a fair few concrete swims so I always take my pod, nine times out of ten I will back lead to keep the lines as low as possible. I will also make sure that I stay as low to the water as I can, turn my alarms right down and be very conscious of every move I'm making. If I'm fishing the margins under my nose, then I'll set my rods up a few feet back from the edge, I also make sure that none of my landing nets are visible over the water. All these little points contribute to mastering your own silence and I personally feel that it's a lost edge in angling nowadays.

My rigs were exactly the same as my last session, only this time around I was using my "trigga-link Combi". It was made up of Atomics 'Bare Back' in 15IB and the Nash 'trigga-link' in 15IB. To enhance the spring like quality that the trigga-link provides, I upped the weight of the lead to a 3oz. The hook was a Nash 'Fang X' in a size 6 with a relatively short hair. Both rigs were going to be fished with single boilies, apart from the freebies I was baiting up with, no other forms of attraction were going to be used.

Once everything was set up and ready to go I flicked both rigs out and then proceeded to apply the bait. I spread it all over both spots, I wasn't too bothered about keeping it tight. Within a few minutes I could see evidence of carp feeding, there were streams of bubbles coming from both of the baited areas. Liners and little knocks were instant, within minutes the right rod was away. As usual I was met with minor chaos, a hard fighting scrap ended in a lovely dark common.


First On The Tigerfish 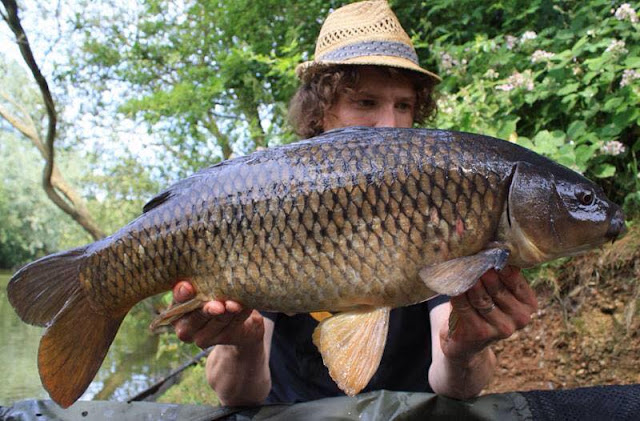 I was really pleased with the quick result, wasting no time the rod was straight back out again, followed by a couple of handfuls of freebies. The feeding signs ceased from the spot I'd caught the fish from but I could see fizzing coming from the far margin, very close to where I'd cast my bait. It was clear that the 'Tigerfish' was something that the carp wanted to eat, I also had to consider that I'd made the right swim choice as well.

As I sat eagerly waiting for my next carp and observing my own silence, it struck me again how loud the others anglers were. Rods were being cast, there was shouting, spombs and spods flying in all directions. I started to imagine myself as a carp, what would I do if my home was being invaded?, I would find a quiet place to hide away from the commotion. I visualised the water in front of me being a safe haven, and as I sat picturing every carp in the lake crammed into the few meters of water in front of me, my left rod was away.

The fish bolted at crazy speed to the left of me, applying side strain, I teased her back on course and only just managed to keep her from diving into the snags down to my left. I soaked up the fishes movements that communicated to me so very clearly, I let my 'Skorpios" do all the work. The addictive curve and sudden creak of the blank is a sound that never tires. To my surprise, a lovely chocolate coloured mirror surfaced and 'waved its white flag' as the net mesh engulfed her.


A Blunts Mirror 'a rare sight' 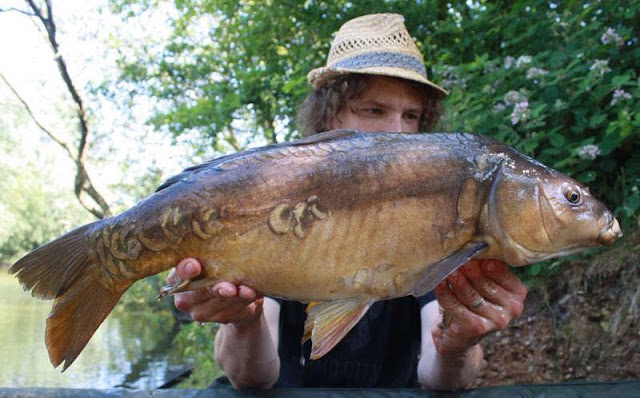 I was so happy with this carp, mirrors are few and far between on all the Chelmsford waters, it's a nice surprise when you manage to catch one. Once again, size was unimportant, it was my second quick bite on the "Tigerfish". I repeated the process, the rod went out followed by three modest handfuls of freebies.

All obvious signs of feeding fish dispersed, I reckon I'd attracted a few whilst they were passing through. I knew it was just a matter of time before "the second squadron" would come and land on my spots. Whilst waiting I focused on my silence once more, breathing calmly, listening to the light breeze that would gently sway the branches overhead, sonically it was very soothing, being by the water can really heighten your awareness, yet again, awareness is another skill that's there to master.

An hour or so passed before the signs of feeding fish reemerged, the righthand rod in the centre of the channel started to give off a few bleeps, bubbles were cascading to the surface. Bang.. it was away, the fish ran straight towards me, I reeled in like crazy, a monumental fight occurred straight under the rod tip, another little common was soon in the net. It never ceases to amaze me the fight these fish put up. 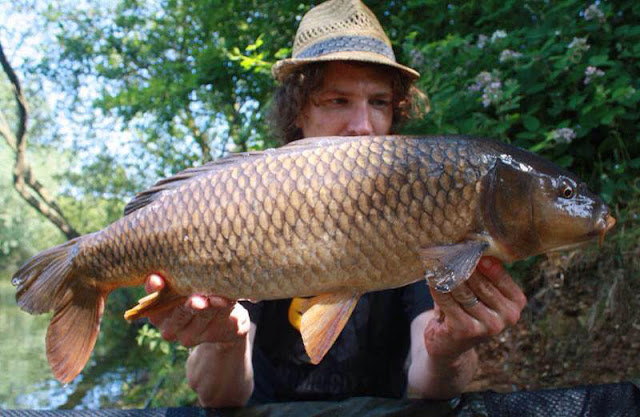 As I released her back home another angler started setting up to my left, and then proceeded to cast very close to my far margin spot. I didn't feel comfortable leaving my bait there so I decided to reel it in and lower it down onto the third rod spot that I'd been baiting up throughout the session. It was super close in so I positioned myself way back from the waters edge.

A few minutes later someone else turned up to the right of me on the opposite bank, I was starting to feel hemmed in, I reeled my right rod in and broke it down. I decided that I was going to stay until I'd got a bite from the pre-baited area. I didn't see any point staying when lines were now either side of me. Packing my kit away, I left the bare essentials out, my eyes were fixed on my spot, a few bubbles surfaced followed by a savage liner.

Within seconds the rod shot round, I was on it like lightening, giving full side strain to keep it away from the sunken branches, it was totally nuts. The fish tried its best to ditch me in the snag but I managed to hold on and direct her my way. Back and forth, right to left, it was pretty dam exhilarating. When I finally came to net her, I was physically exhausted. 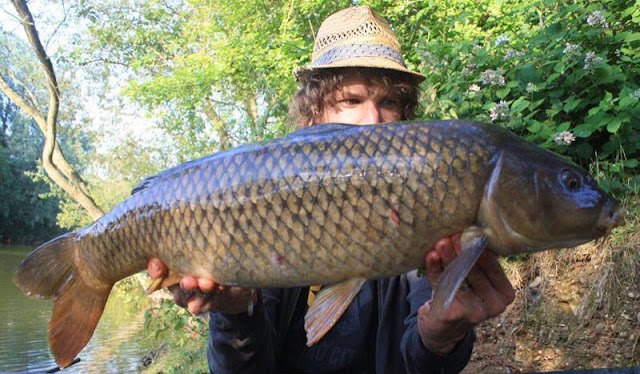 I thanked her for the visit and sent her home, I could've carried on the session for a few hours longer but I didn't feel comfortable fishing in such close quarters to other people. As I stated in PART ONE of this blog, Blunts is a water that's great for a bend in the rod, not every session you do has to be an exploration into brain surgery. It's nice to get out there, try new things and have a few fish along the way. I'm looking forward to future sessions on the "Tigerfish".

Posted by Charlton Carper at 01:33