Burrows 'A Ghost In Winter' Part 4

One of the great advantages in writing about my angling is that I get a chance to look at it all from a distance, this allows me to clearly understand what I've done with my time spent on the bank and what path I'm going to take in the future. I only seem to experience a true sense of clarity once the process of writing and recalling has been completed.

The moment I press the 'publish' button, it's like setting a ship off to sail, within the final moments before departure, you then get a true sense of whats been constructed, and as it sets sail or takes flight 'whatever metaphor you chose to use' it's now free to become whatever it's destine to be. It's at this time I can use whats been written to plan my future sessions, catalogue mentally what's worked well and develop a few areas that I feel were lacking.

What I mean is this.. when I look back through my winter sessions on Burrows I can see that I was thinking in a proactive way, adapting, changing and trying things that I'd usually sit on for a good while before putting them into practise. I've managed to catch some really nice fish and I think this is because, basically put, "I was doing the right thing", so obviously I was going to get "the right result". This demonstrates how adapting and always trying to be progressive in your thinking can make all the difference, it's too easy to stick to just one way of fishing.

You simply can't do the right thing and get the wrong result - and visa versa. If you're continuously not catching on a venue and you're fishing it in exactly the same way every time you go, change one thing, and repeat this process until the bites start, sometimes the simplest of things can make all the difference, any change you make needn't be complicated, simplicity is always the key. Combine this way of thinking with confidence and conviction in your own choices and I'm willing to bet the worm will slowly turn and with time, you'll landing net mesh will be gracing some gifts.

Getting To The Job At Hand

This blog is going to account for a short day session, it was during this period that I got very busy with work so I had to slot my angling in when it was possible. This time around I'd decided that, to a degree, I was going to replicate what I'd done previously, the only difference being that I'd moved one swim up to the left. You can get away with fishing this area of water literally a few yards out. I call this swim 'The Spit' because it resembles a narrow walkway that branches out further than the rest of the bank side.

I personally love this spot, when you walk out to the end of it, you're surrounded by water, the view is incredible and when the wind blows hard, it's as if you're at the apex of a mountain, you feel so isolated, many times I've got myself soaked and blown sideways standing on its edge whilst wrestling a carp. Directly under your nose it shelves right down to 7/8ft and has proved to be a pretty successful patrol route in the past. With the cold wind shifting the water, I visualised the carp lurking in the deep.


Face To The Wind On The Edge Of The Spit 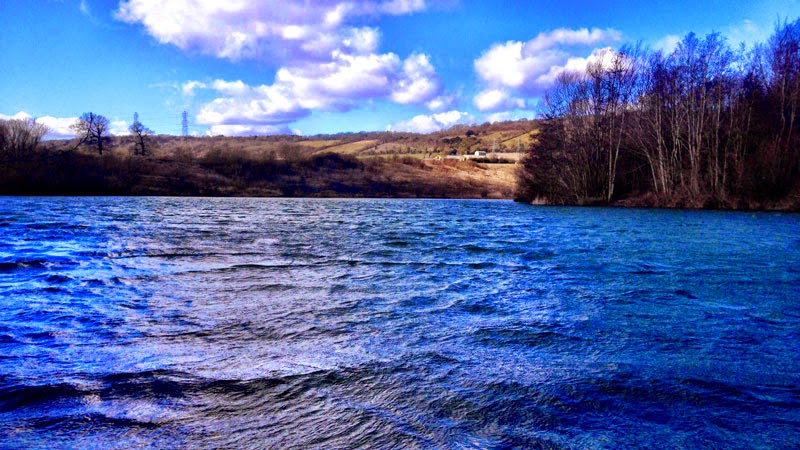 On the day of the session I arrived for noon, it felt brutal, you could really feel a knife in the wind, it was cutting. This already got me thinking that my vision of the carp haunting the deep channels could be right, I felt pretty optimistic. I'd decided I was going to be sparse with my baiting approach, I really didn't think the carp would be up for feeding much, maybe if at all.

My bait of choice was Caribbean boilies that I'd soaked in Tigernut & Maple glug, they were very potent and I knew 100% that if fish were visiting the area, they'd find them hard to resist. Over the top of each rod I was going to put a handful of multi-mix pellets that had also been soaked in the same glug. I'd left the pellet soaking so it was just on the edge of breaking up, I wanted them to almost disintegrate whilst they were passing through the water columns, not only would this create a wide area of attraction, it might also pull any fish in the mid to upper layers down on the deck, or at least in the rough area of where my baits were.

An Anomaly On The Landscape 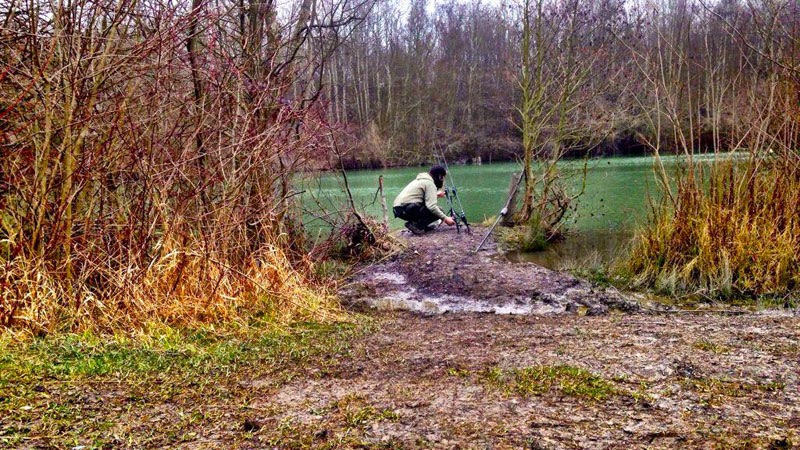 Rods were set, I was fishing tight to my back leads, bobbins were literally touching the blank, I'd set everything up so it was as sensitive as it could be. The kettle was on and the waiting game had now officially begun. I took a moment to think about my previous sessions, it felt good to be concentrating on one lake. As most know who read my blogs, I have a lot of waters on the go at the same time. I think putting all of my attention into one lake, 'especially in winter', was the right move, it allows you to go through a much more systematic process.


A Single Mini Spomb For My Left Hand Spot 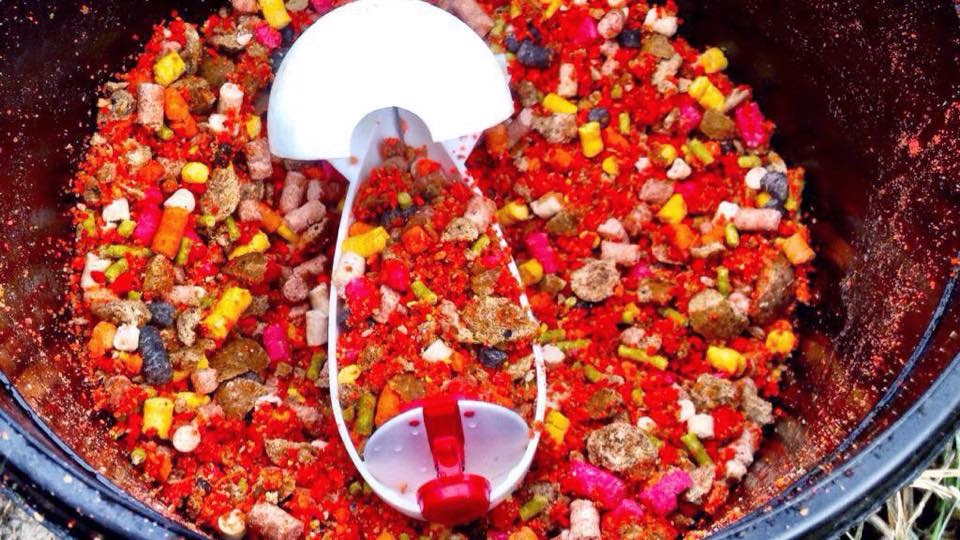 Winter time is all about giving yourself the best chance of catching, even though it can be a rather lonely period, fishing through the colder months is vital for me to continue to gain knowledge and understanding of angling as a whole. The bigger picture you create for yourself on the bank, the more chance you have of being able to tackle any water that you might come across in the future. If I'm not learning I don't feel like I'm fishing right, each time I walk away from a session I make mental notes of everything that I can use to my advantage on future outings. 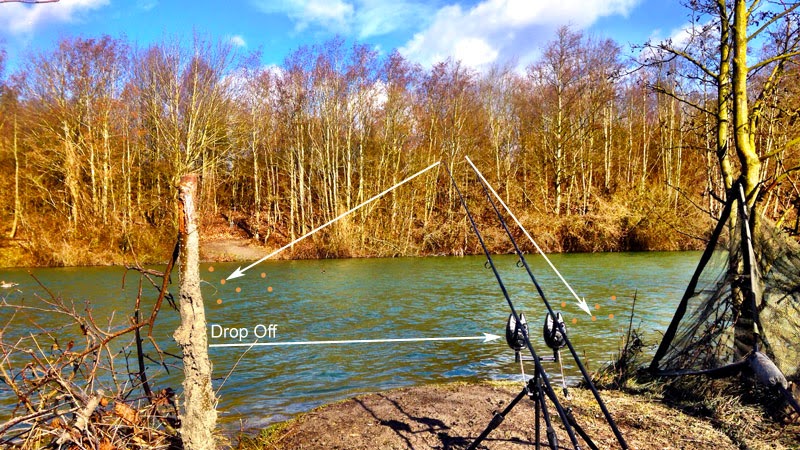 Along with both glugged boilies and pellets I'd topped off my hook-baits with some of Krystons Doppel-Ganger. This is a very versatile substance that comes in a variety of colours, it's super buoyant, flavoured and best of all you can mould it into any shape you choose. In theory I was fishing a mini 'snowman' style presentation, I wanted that little bit of buoyancy to counter act the weight of the hook and again, present something a little different to your standard round shape. 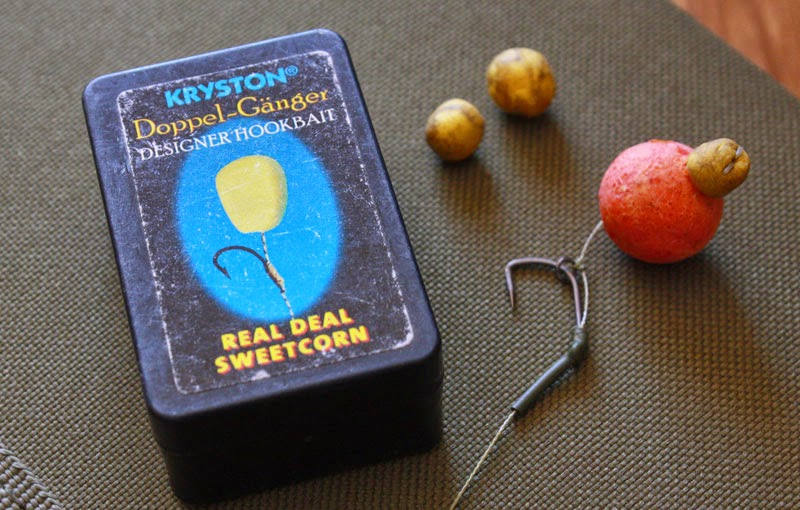 A few hours passed with no action, this alone proved that the drop in temperature had without a doubt effected the fishing. But as we know, this is all part of the puzzle, I knew what I was doing was spot on for the conditions, I just had to wait it out. On the upside, I was the only one on the water, the colours around me were vivid and both me and the landscape were taking a good old beating by the elements.

I decided to take it all on the chin, keeping the brolly packed away, I took pleasure in inhaling deep, clean breaths of fresh air, combining that with an immense intake of caffeine, I was pretty high on life, the thought of a blank didn't bother me at all. On the other hand, the thought of me having stayed at home to not soak all this up, that just wouldn't have been an option.

Suddenly my right rod was away, totally taken by surprise I grabbed it, composed myself and I was soon "back in the zone", the few hours of no action were soon forgotten as, after a solid fight, I was staring into the eyes of a lovely mirror, draped in its winter skin. It was a lovely mid-double, I didn't weigh her, a few quick photos and she was back in her watery hideaway, what a tidy little result.


A Spirited Mid-Double Came Out Of Nowhere 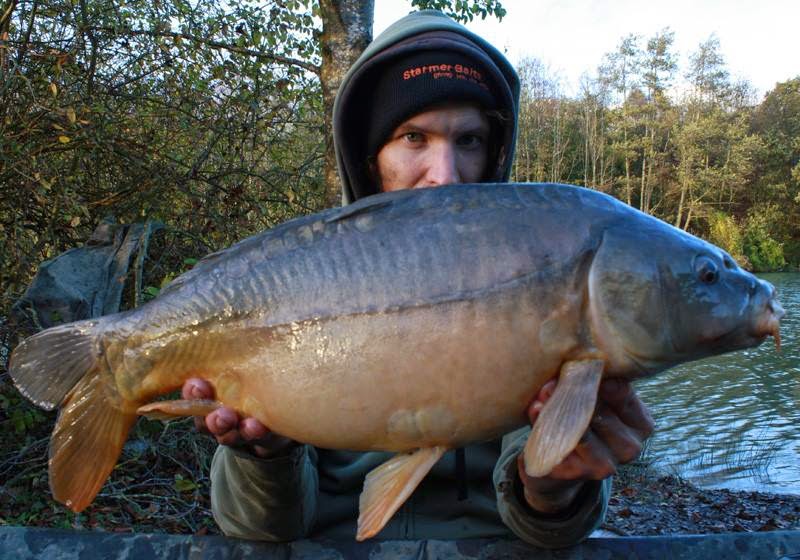 The rod went straight back out on the same spot, along with a handful of bait. Back-leads and bobbins were reset, all was calm after the momentary chaos, the kettle was back on and I was sitting once more staring in trace over the water. The wind started to ease and the low sun shone brightly, I sat thinking about angling, the excitement, the expectations and the sheer buzz you get when the alarm sounds.

I find every time I get a run I experience a 'time shift' effect, you can sit for hours and days waiting for a fish, the second the rod goes off, all the time spent waiting simply vanishes within a few seconds. On experiencing the capture and of course, the release, it's as if you're refuelled for 'the wait', you get a feeling of optimism as you recast, re bait and once again take a seat. Patience is a beautiful thing when you're in pursuit of carp, patience has to be mastered and as mentioned before, one of the main foundations that lies within patience is confidence in knowing that you are giving yourself the best chance of getting a bite.

Late afternoon arrived, all was quiet, I hadn't seen any evidence of fish, I was thinking about packing up but this thought was soon erased when I heard the bobbin on my right hand rod smack onto the blank. I was in, the rush in my gut erupted, time once again became irrelevant and I proceeded to battle with a ball of chaos that was weaving around the water in front of me, I held on, let the carp blow its load and soon netted a moody looking common. Once again, I didn't weigh her, she was a good mid double and very much welcome.

A Perfect End To A Session 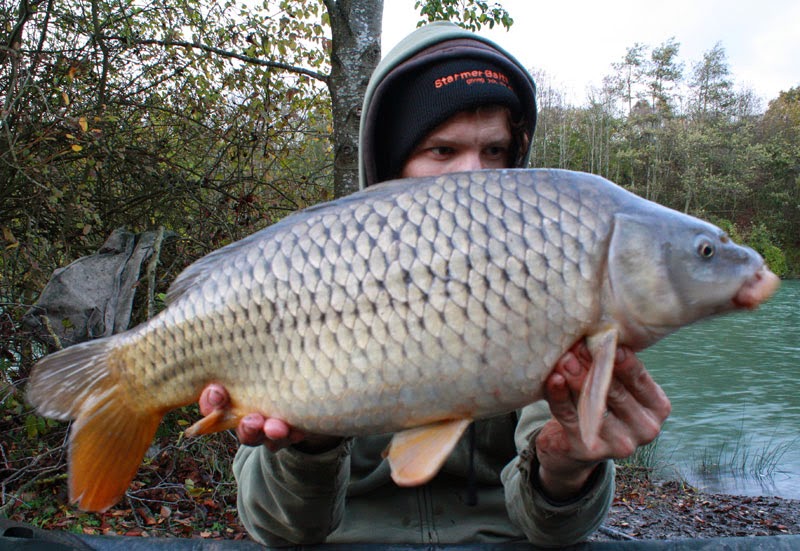 Once again I felt it was a pretty solid session, it was clear to me that things were starting to slow down. This however was not going to put me off, I believe that carp are catchable all year round but you have to change your view point on how you're going to go about catching them. My gut was telling me that there were still fish to be had. My next session was going to be the start of my mobile approach, as the fish get less active I need to make sure that I keep busy on the bank. Both location and baiting correctly is going to be vital if I expect to get any kind of result.

As I made my way, once again, along the muddy path and up to the carp park, the whole complex was deserted. The sun had set, it was very eerie, I packed the car and decided to walk back to a point where Burrows could just about be seen through the trees. I felt connected, and at the same time, totally alone, for all I knew there could have been a nuclear war raging, but I had no interest in the outside world, it's something I find hard to be a part of at the best of times. I knew I'd found my place years ago and as long as I'm by the water then I know everything is ok. 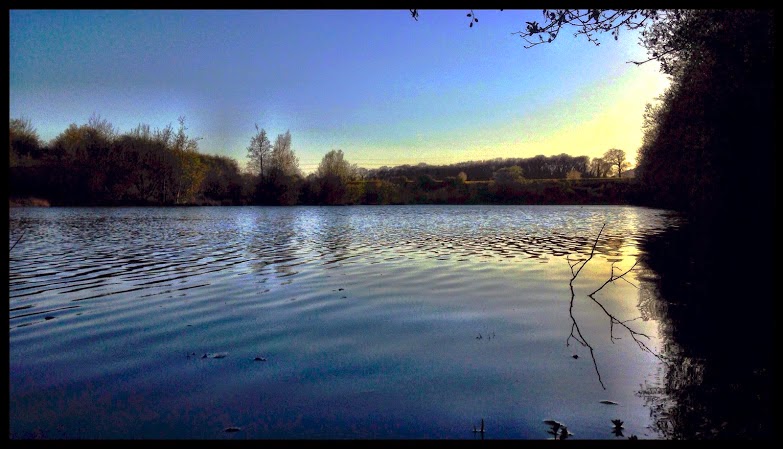 CLICK HERE FOR PART FIVE
Posted by Charlton Carper at 04:32