Boreham Mere 'A Tsunami Of Thought'

I first laid eyes on Boreham mere when I participated in an out of season work party, to me, it's a proper history water and many sought after carp have resided within its depths over the decades. The lake itself feels like it's locked in time, the minute you shut the gate behind you and walk down the path, the mere presents itself through the trees, it's a magical sight and you really get the feeling that there's some special carp just waiting to be tamed. It's no means easy by any stretch of the imagination but I have no doubt the rewards are abundant if you put the time in, as we know anything worth having isn't easy to obtain.

When I approach waters that are known to be ball breakers I find that I have to think about them in a completely different way. There are a number of venues that I fish that are very tricky, it's all to do with your mind set. You can't step on to a hard venue with the same expectations as you do when tackling a more productive water.

I have walked the lake a few times and I'm yet to see a single carp, there are a lot of places for them to hide. There's a mass of overhanging trees, reeds and a good majority of the water is taken up with beds of pads. Among the main features are two islands, there is a lot to go at and some real obvious looking spots, I plan to avoid all of them, I have a feeling that all these areas see a lot of pressure, I wanted to explore the nooks and crannies. As usual my head starting spinning with possibilities so I really had to pace myself with my thinking. 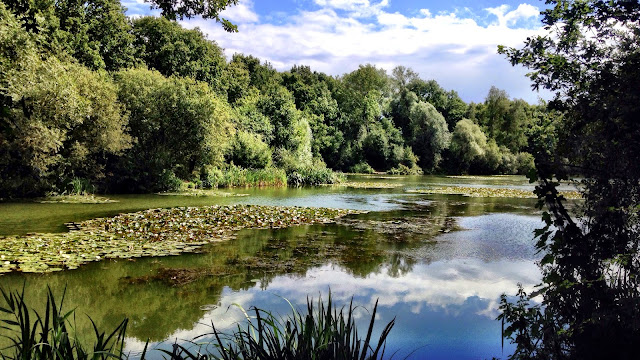 It became clear that a lot of people cast as close to the pads as possible, a good few fish come from doing this. There have also been reports of anglers casting over the pads and dragging the carp through them. I personally think this is disgusting behaviour, I won't fish spots if I know that I won't be able to land the fish safely. The "fish at any cost" approach is unfortunately something that now plagues modern carp angling. I have said in previous posts that fish care starts from the fight, heaving and yanking them around can do untold damage and create even more stress to an already stressful situation.

I have a theory that a lot of the bigger, more elusive fish are solitary creatures, on Boreham I want to be fishing for a bite at a time. I don't think the "big hit" method is going to work, the mouthful approach has been doing me well over the past few months. As we know, too much of one thing has the reverse effect, this goes for everything from drinking alcohol and coffee to eating sweets and fatty foods. It's all fine in moderation but too much of one thing can have adverse effects.

I believe this also carries through to baiting strategies, all the waters see so much bait, kilos upon kilos are being put in all the time. We know that this can work on some waters very well but I believe it can also kill a lake outright. I believe pressured waters fish differently to those that don't see so much angling pressure, I find that the 'by the book' approach can fall short. I have come to understand that there are so many variables in carp fishing and you have to adjust all the time to cater for the situation that stands before you.


Closing The Day On The Mere 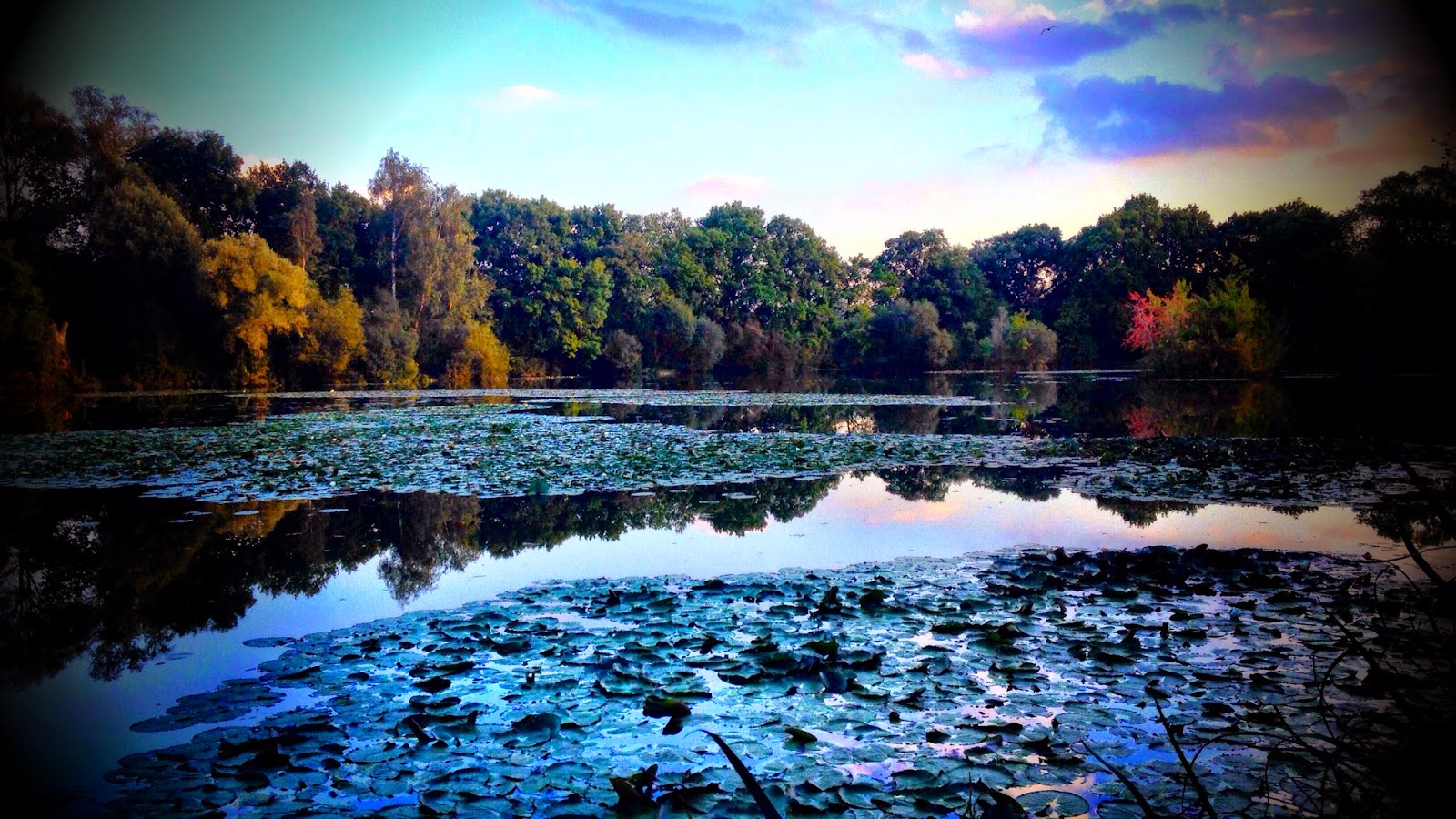 I think there is this set belief that the carp will simply hoover up everything that they come across. I personally don't believe this is the case, I think bait can be sitting on the lake bed for days at a time, maybe the odd fish will pass by and take a few mouthfuls, and the scamps might eventually move in and have a feast but I don't think the carp 'always' has the bottomless stomach that we think it does, again I believe angling pressure changes the way the fish feed.

How do we know when and when not to pile the bait in?

The above question is very simple for me, it's a process of trial and error, dedicating sessions to different baiting patterns and making notes on what's the most effective on each specific water. There are at least three waters that I know I can get away with piling it in, the rest requires thought and careful application. Boreham instantly communicated to me that careful application was the way forward.

My first two sessions were spent targeting the shallows, this is the end with the majority of the pads. Within these sessions I chose to try a few different baiting approaches, on one rod I had a tight spread, the other a large spread covering a good five or so meters around the hook bait. As expect, neither rods produced a fish, with two blanks under my belt I decided to follow my original plan, which was to fish singles.

When I arrived at the water for my third session the lake had an optimistic feel about it, there was a light drizzle and a gentle warm breeze, it felt right. My swim of choice was on the opposite end to the shallows, it was called 'Bottles', I liked the look of this specific swim because it gave you a lot of options. As previously stated, I wanted to avoid all the obvious features so I decided to target the channels in between both the pads and the island that was directly in front of me. 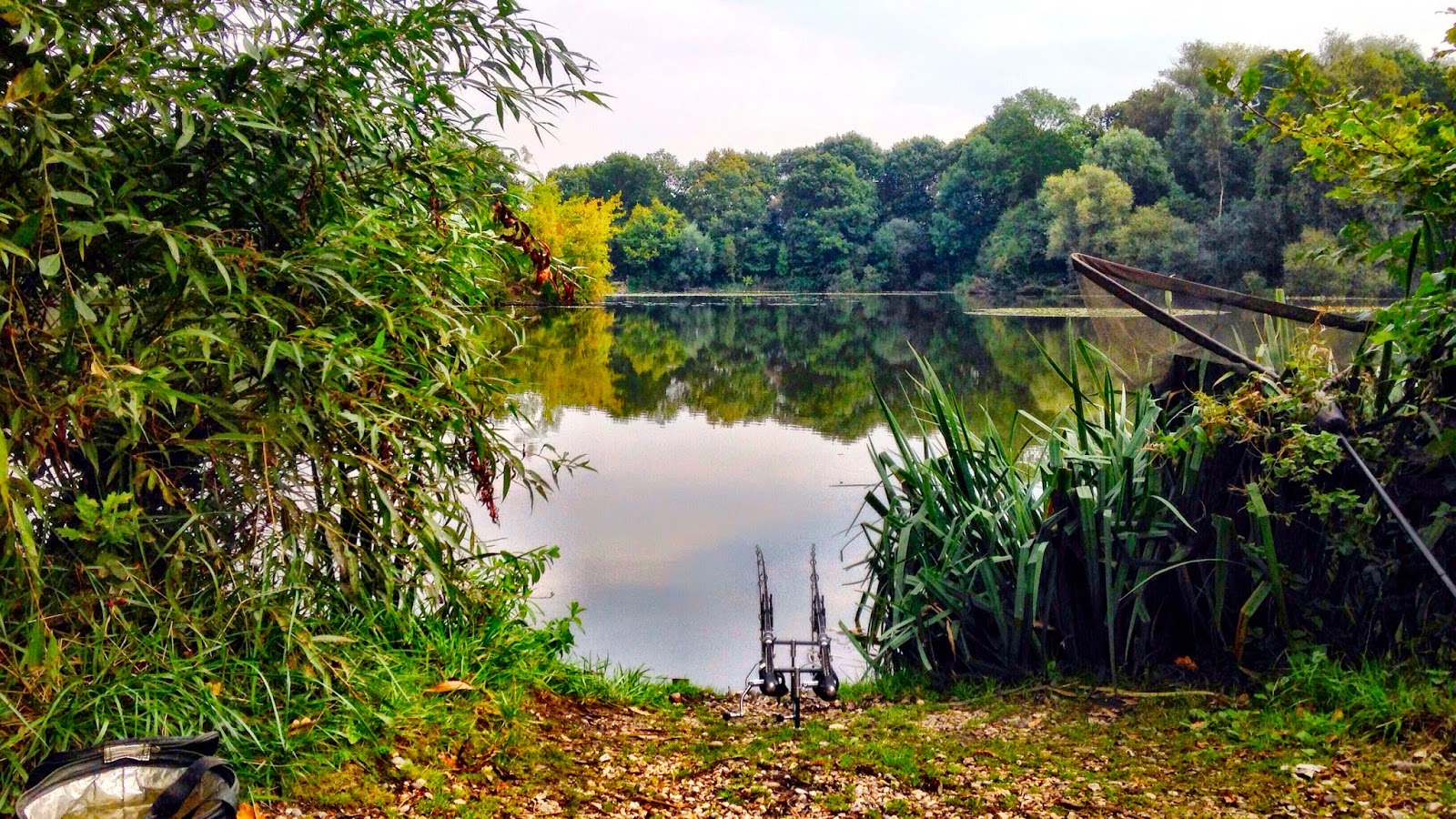 Before getting my baits out I wanted to suss out what I was fishing over, I've heard there are a lot of under water features all over the place. I wanted to do this quick with the least amount of disturbance so I removed my marker float and opted to have a quick chuck about with just a lead. The bottom was predominately soft, my left hand spot felt silty, as I checked the lead I could see a good few bloodworm within the soft stuff, that was a very good sign. The right hand spot again felt soft, I decided to put a bottom bait on the bloodworm patch and a pop up on the right hand rod. 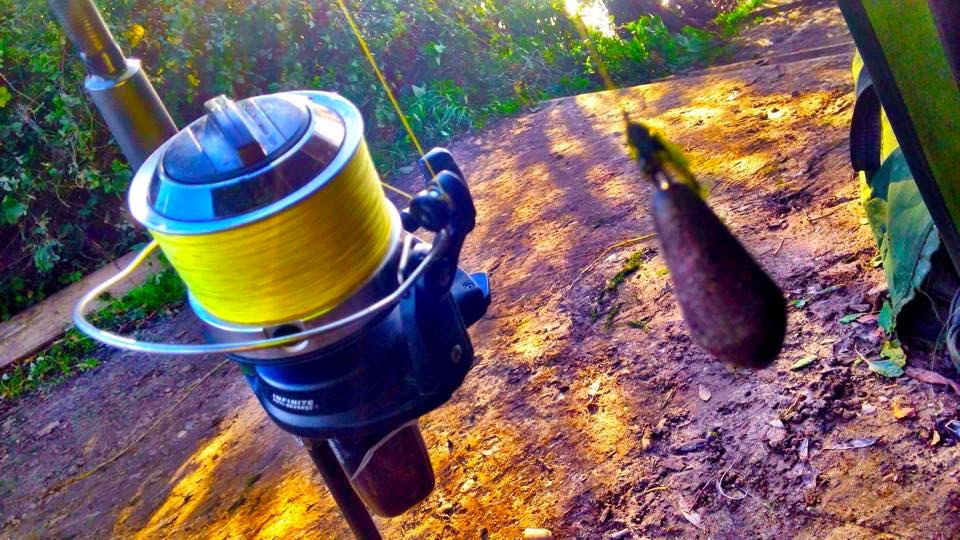 My chosen baits were Honey Nectar and Banana Cream, I have a huge amount of confidence fishing these two flavors as singles. As usual my rigs were nothing complicated, my bottom bait had a nice long hair and the pop up was balanced well. To me rigs are such a grey area within angling, I find when I over complicate things, problems can easily occur.

The more simple you make it the less there is to go wrong, I find people can get really hung up on the specifics, I still believe that if the fish are feeding and you are right on top of them, two side hooked grains of corn on a float will pretty much catch anything that swims. I have four different rigs that cover all fishing conditions, I have used them for the past 20 years with good effect, apart from the hook link materials, I can't see myself changing anything ....  "if it ain't broke", it doesn't need to be fixed. 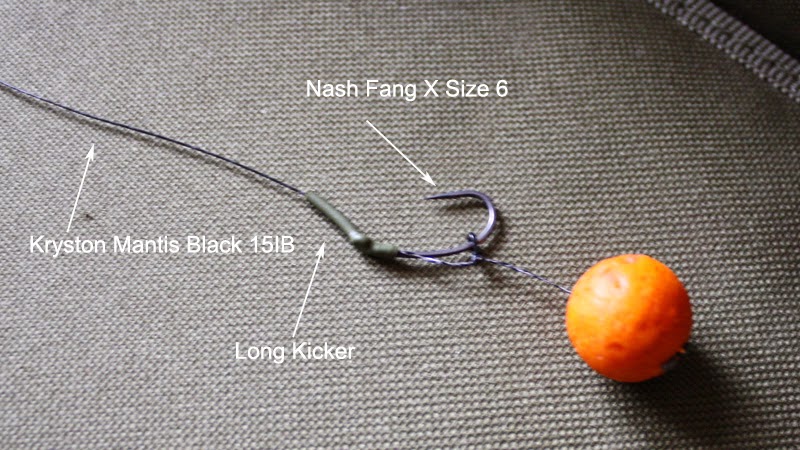 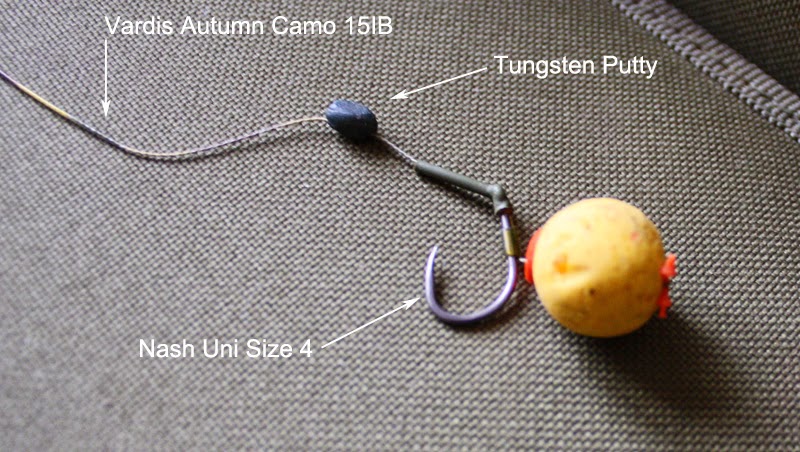 Once the rigs were sorted and the lines clipped up, I sat back to have an extra strong coffee before casting out. The wind was in my face and I had a real gut feeling the fish could well be following it. Once the caffeine buzz kicked in I got both baits out with clean, feathered casts, popped the back leads on, set my bobbins and sat back in anticipation. Was it going to be third time lucky? 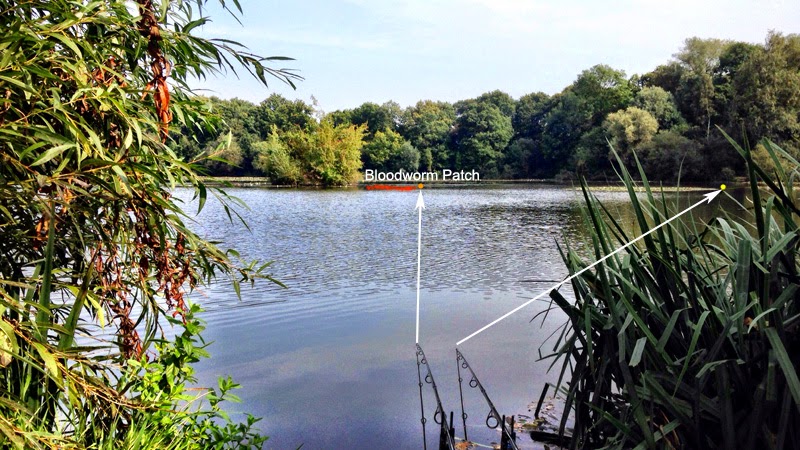 To what I can only describe as utter shock, things happened quickly, the left hand rod was away, at first I thought it was probably a bream. The idea of hooking a Boreham chunk so quickly was almost impossible to process. I lent into the fish and the rod arced round, this was no bream and as the clutch started ticking it was clear that there was something pretty tasty on the other end. Cushioning the lunges, I was making good headway and the fish started cruising my way, once under the rod tip it really woke up, I was dying to get a glimpse of the monster that saw it fit to take my single offering, but it stayed down in the water. Just as it was starting to tire and come to the surface ...... ping!! the hook came out, I couldn't believe it, I can't remember the last time I lost a fish to a hook pull.

I was gutted, I started thinking that fishing a bottom bait might not be the answer. It only takes a small bit of debris masking the hook to effect how efficiently it nails the carp. I proceeded to rig the rod up with a pop up, whilst doing this the right rod gave a few bleeps and shot into life. I scrambled for it, I couldn't believe I had another chance of landing another Boreham carp. This fish was roaring around and I held on for dear life, slowing edging her towards me. It surfaced a little way out and I caught a glimpse of a long common, my pulse was racing and I was determined to get this one in the net. Before I knew it, it was ready to give up the ghost, once in the net the relief was overwhelming. Scales sunk to 24IB exactly, what a bloody result and what a fish it was. 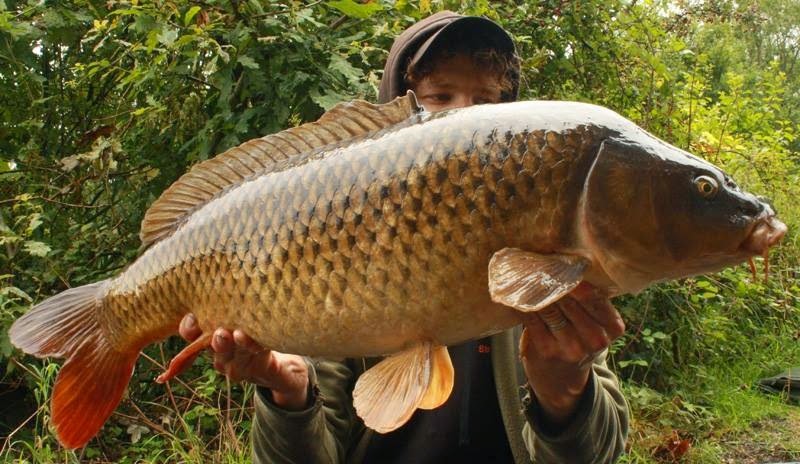 I felt myself very fortunate that I had another shot at landing a fish and to be honest it took the sting out of losing the previous one. I don't think it was coincidence that the pop up nailed her, it was a solid hook hold, I think in certain spots the hook of a bottom bait can be compromised by debris. In the future I will only fish a bottom bait rig when I know I'm fishing over the hard stuff. My theory about fishing singles might just be right and if I focus hard enough I might be able to slowly pick the fish off. However tempted I might be in future sessions to load the swims up with bait, I must abstain and stick to my original plan.

One More Coffee And Then Home 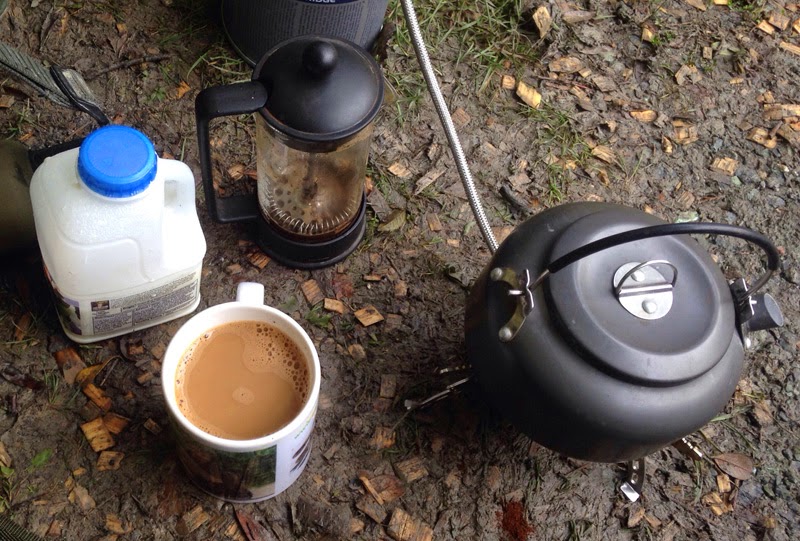 The rest of the day remained silent, I think I'd timed it just right, the fish were obviously moving through the area, getting two takes tells me that they probably move around in groups, this is something I shall bare in mind for the future. Next time I might try fishing both rods closer together, time will tell and I am sure my perspective will change a good few times before I feel settled with the place. Either way it was a positive start to a journey that is going to be very testing. I look forward to sharing it with you.
Posted by Charlton Carper at 06:36