After the minor success of my last session I felt inspired to do a little bit more searching. I spent a few hours one afternoon feeling about in a few of the less popular swims, I found a few features that I liked the feel of. The main one being a 4ft plateau about 25 yards out, the swim was pure open water. To the right was a steady drop off down to 7ft which led into a corner. The drop off and the majority of the bottom that fell into the corner swim was soft sand and silt. The margins were predominately gravel with the exception of a few small areas, the margins shelved up close in.

I really liked the look of the gravel plateau and in the past have seen fish topping at the sort of range it was situated at. I made up my mind I was going to concentrate at least two rods on this spot and it was going to be a 'slow burn', a long term concentration. In regards to baiting approach, I decided I was going to fish a single over a fairly large bed of free offerings. I wanted to pull the fish in and get them digging around and in future sessions, even if I wasn't fishing this spot I would make sure that I'd add at least a kilo of bait to it. I wanted it to become an area the carp associate with food. 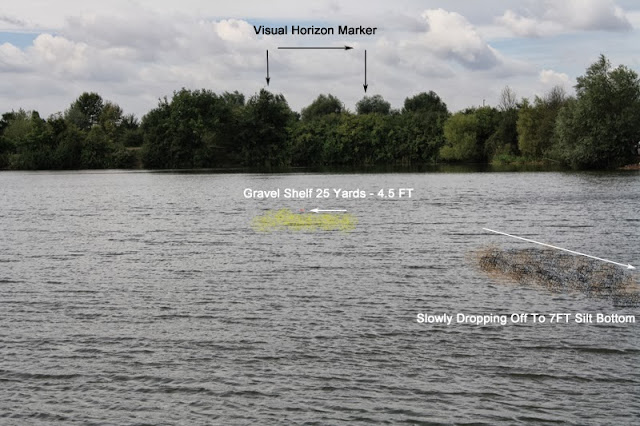 I had a slightly more in depth search about and when I finally reeled my marker in I had a pretty good idea of what was in front of me. This is a process I have to do when starting a new swim or a new water. As I have said in the past, I can't just "Chuck For Luck", I have to feel that I am fishing correctly and have a better understanding of what I can't readily see.

The basis of my approach on this specific water was pretty systematic, I would keep two of my rods on the main spot and then have the third as a roamer, with the roamer I wanted to search out other areas in the swim, I was basically fishing for a bite at a time. If I started to get takes off the main spot then I would cast the roamer on the edge of the area. If the main spot was slow, I would remove one rod and have two roaming. By doing this I felt I was giving myself the best chance possible to pick a fish off. 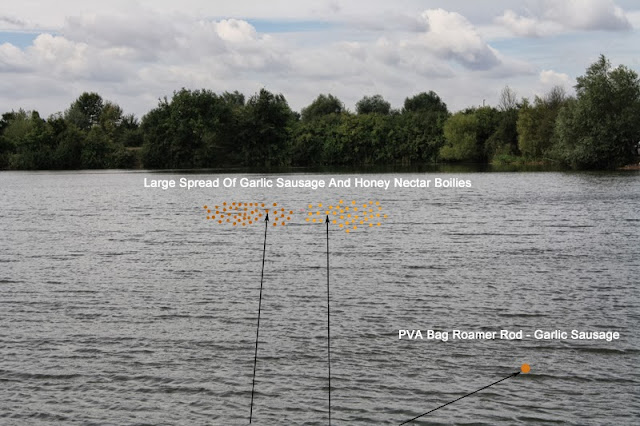 The baits I'd chosen for this session was Garlic Sausage and Honey Nectar, amongst them was a light scattering of Green Lipped Mussel Crab. I was fishing two bottom baits on the main spot and a pop up on my roamer, the areas I was recasting to with this rod contained a fair amount of debris on the bottom, popping my bait up gave me piece of mind that it was sitting proud.

My pop up rigs have gone through a few changes over recent months, I wanted something that was quick and easy to tie. My chosen hook for my pop up rigs are the size 6 Nash Uni, I really like this hook pattern and naturally starting using it for my pop ups. I have ditched the rig ring for rig tubing, it can be really fiddly trying to get the hair length right. I like to have my hook bait touching the curve of the hook, this ensures the carp is nailed the second it mouths the bait.

The problem I found with using silicone to pin the hair down was the fact it would split on the take. Carp Craze rig tubing solved this issue for me. I don't use leaders or lead-core, I never have, I am a big fan of tubing. Carp Craze has a selection of three, Camo, Translucent Green and Silt, not only are these very versatile as a rig component but they are great on the hook to trap the hair. My favoured one is the translucent green, this is softer and slightly more flexible than the other two. 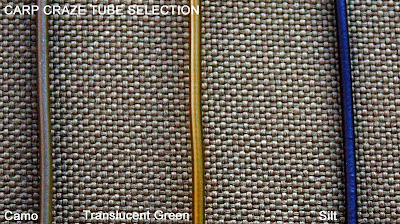 The diameter fits perfectly on a size 6 uni pattern, it grips just right and still allows the 'blowback' effect to happen when a carp picks the bait up. Because the material is a lot more resilient than the silicone, it will last until the rig/hook is dead.
Rig Tubing Replaces The Ring On My Pop Ups 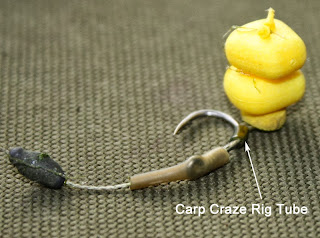 Back To The Fishing

Once I was happy with the spread of bait, I marked my rods up to the main spot and got them bang on the money. My roamer rod was cast at short range in the margin. The wind was blowing straight in my face so I was feeling pretty confident that a few fish might be following it. It didn't take to long for some action to happen, my left hand rod shot off like a bullet train...fish on!! after a modest fight I banked my first carp of the session, it was a pristine little common. The size was irrelevant, the capture signified that the spot had the potential to produce. 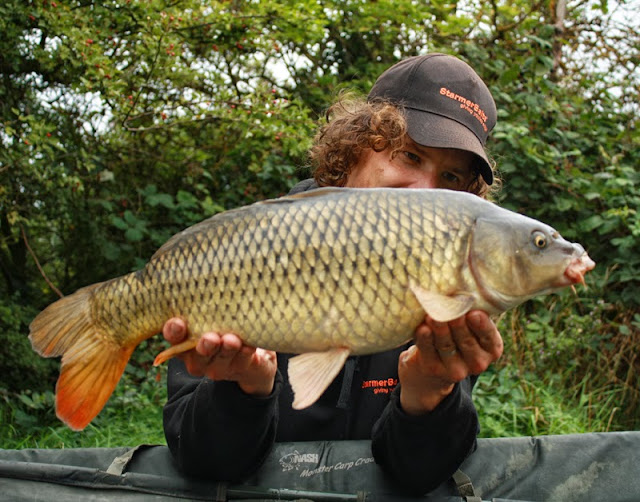 I got the rod straight back out, topped the swim up and sat back to wait, the weather took a turn for the worst, it started hammering down and the wind really started to pick up, about an hour or so ticked by and the same rod took off again, I banked an awesome looking little mirror, it gave a great account for itself. 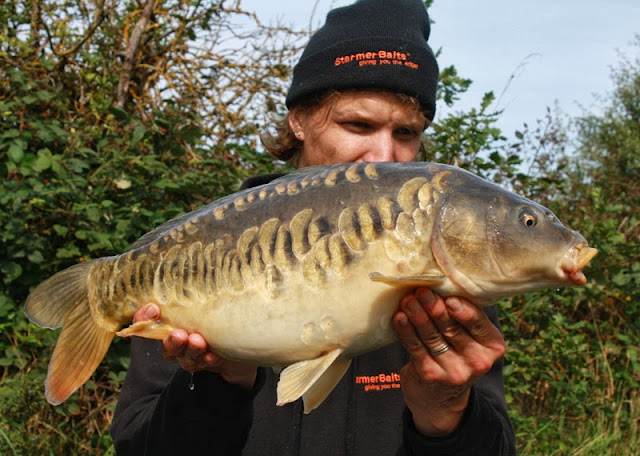 I topped the swim back up and got the bait back out, I thought it was about time I gave my 'roamer' a recast. I moved it to more of a medium range position, this time I chucked a handful of boilies around the area. Another hour passed before I got some more action, this time, off the middle rod, I lent into the fish and it was kiting all over the show, I had a feeling I had hooked another scamp, after a short fight I netted myself another perfect looking common. 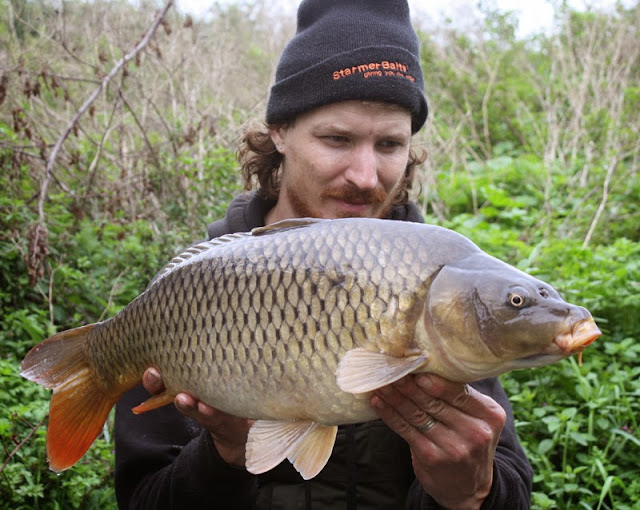 Once again the size was irrelevant, it was about banking some fish and working with the spot I had found. It felt great because in the right conditions they are obviously confident in feeding in the area.

On my next cast I decided not to put anymore bait in, I felt there was probably enough kicking around out there and I wanted to see if I could get a quick bite. Shortly after setting the bobbin my other rod was away like a rocket. When I hit into this fish I instantly knew I was onto something a bit bigger. It was really giving me the run around and there were a few times I thought that I was going to lose it in the 'invisible Chase snags'. Luckily enough I managed to land her, the result being a chunky 22IB mirror. 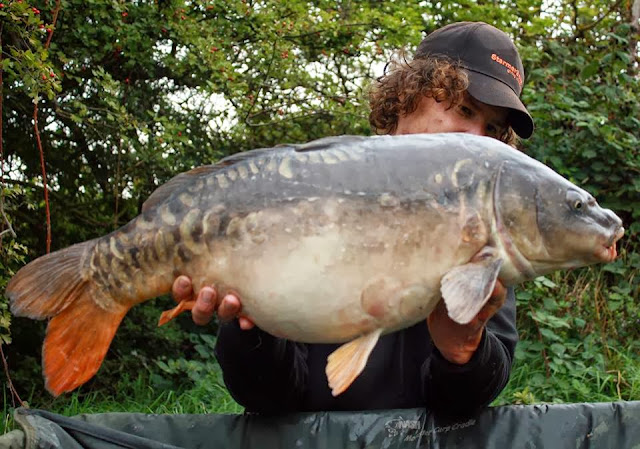 I was really happy with this fish and I was also happy with the mixed bag I was managing, I must admit that it's always nice when a surprise picks up your hook bait.

When the weather turned I was starting to get a lot of false bleeps from the wind, I had turned my sensitivity settings way down but I was still having problems with false alerts. Whilst I had my head down sorting my rig out, the receiver in my pocket started reacting very strangely. I didn't really think anything of it, assuming it was the wind. But as I turned around I noticed that my roaming rod was absolutely screaming, line was being taken at such a rate that the bite alarm signal to the receiver couldn't register it. I dived for the rod, lent back and the blank just arced round like a whip, the weight and power was crazy and something I have never experienced before, before I could compose myself ...... PING!!! the blank shot up straight and there was silence. I couldn't believe it, it had tethered through 25IB braid, I was gutted, I don't know what the hell it was but it was big, maybe a catfish. I just stood there for a few minutes thinking about what I may of lost, that sick feeling came over me, it signalled the end of the session.

I started to break my rods down one at a time and then .. bang ... the middle rod went, the fish put up a great fight, the fair scrap resulted in another spotless little common, I was pleased but still kept thinking about what I'd just lost. 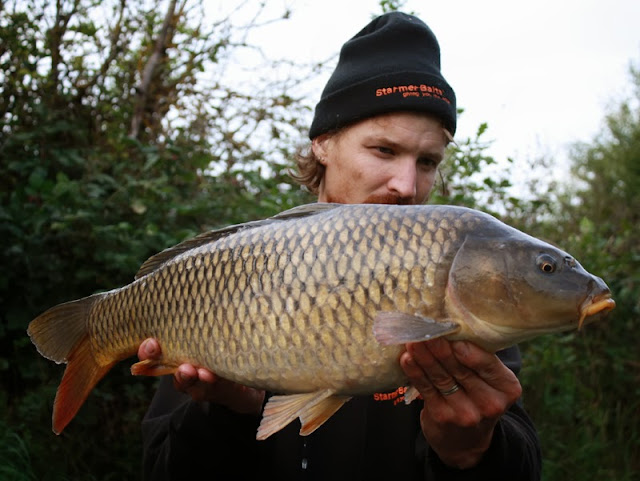 The positives of the session out-weighted the negatives, the bait was working the spots were producing and I felt like I had broken through a little more into the workings of the water. I feel the wind played a huge part in the results. The fish do tend to follow it and I had a feeling if I was to fish the same place when the wind is behind me, I could be dealing with a tumbleweed of a swim. Like I have mentioned before, back lake is a 'slow burn', I want to chip away at it and get to the point where I have a series of swims that I know will produce in different weather conditions.

You will notice my hat changes in the photos, this was because there was broken sun and heavy downpours, I am very specific about my head wear : ).
Posted by Charlton Carper at 00:25