So much can change in a few days, this session was the first time I felt like summer had finally arrived. After my soaking last time it's as if everything accelerated, the bank side is buzzing, almost everything in the water is doing their business and I have received the first mosquito bites of the year.

Arriving at the lake I could see some carp in the reeds thrashing and throwing themselves around so I knew this would be my last session for at least a few weeks so they can be left in peace to do their thing. I avoided all spawning fish and opted for the quieter spots.

I was on the water earlier than usual today, my rods were out by 9:30am and it felt good to know I had at least 12 hours ahead of me. That was plenty of time to make something happen, when looking at the lake for a while it struck me that it was quieter than other days, no fish were showing and nothing was jumping, apart from the few spawning it was pretty desolate. I decided I'd fish the swim that is on the point of the bottleneck, well it was a good place to start, I'd play it by ear throughout the day.

As I have stated in previous blogs, the spots in this swim are very clear so I made a few more minor changes to my rig to try and make it really sit on the bottom in the best way possible. Firstly I changed the lead, their are two that I feel really confident using in these situations. One is 'Carpy Chris's' inline weed lead and the other is his inline pear 'ballast' finish. Both look awesome on the bottom and I think they're very tricky for the carp to detect. 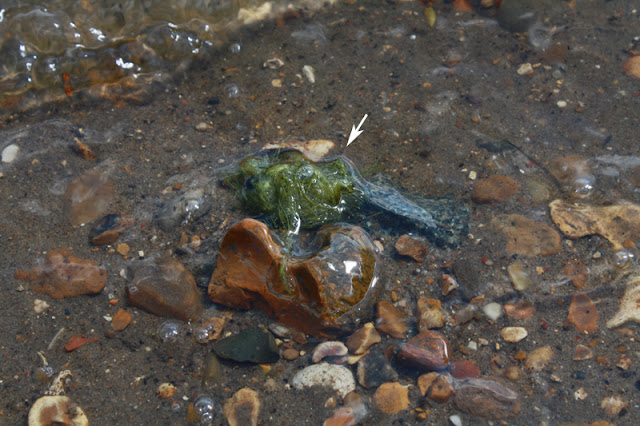 I know there's lots of speculation over how effective camo leads are compared to all the generic shapes and colours, I personally think they work better.  Anything that blends naturally into the environment is a winner in my book and I pay close attention to all the components I use, making sure that I have the rig looking the best it can for any fishing situation that I find myself in. 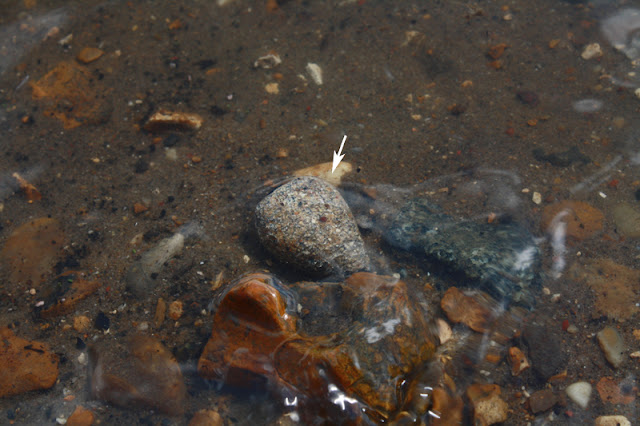 In regards to my hook-link, I was using Krystons Supernova, I really rate it because of how supple it is. I took a small amount of mud and wiped it thoroughly into the braid until it had dulled the finish. When I checked this in the margin it really made a big difference, this only really works on uncoated braids because the mud/dirt has something to soak and grip to.

As stated in earlier blog posts I have really taken a likening to Carp Crazes 'Translucent' green tubing, it's very easy to thread and with a little bit of friction and heat it straightens and molds itself to the contours of the bottom. I am an avid 'tubing user' I never use lead-core or any type of leader like that, I don't think they're safe. Through the years I have caught many fish trailing meters of the stuff.

Get Your Hands Dirty I was feeling quietly confident and I had three solid spots to go at. The only niggling feeling I had was with my right hand rod, directly opposite there were three anglers constantly casting in and out, with lots of casting going on I didn't think the swim was going to have the chance to start working for me.

Both left and right rods were a simple underarm flick out, the middle rod, I decided to fish it directly in the middle of the channel, I was hoping to pick off a few as they made their way through. I was using Starmers Coconut Fish and Pineapple CSL, I have great confidence in both of these baits and have done well on them in the past. 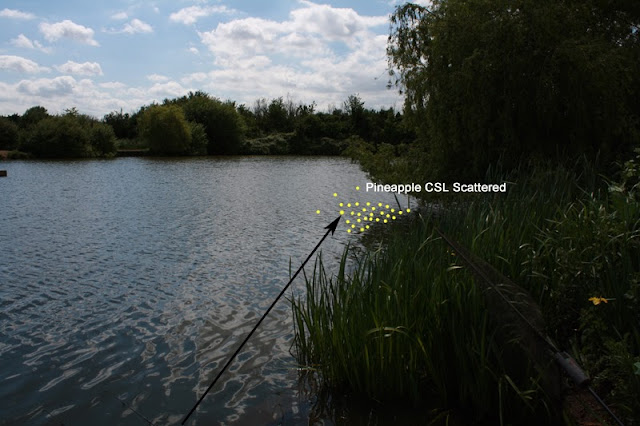 The carp do seem to respond well to a fair bit of bait, for a change I decided to try three different approaches. My right hand rod had a generous scattering of bait around it, my middle rod was a PVA mesh bag containing crumbed boilies and my left hand rod was a single hook bait popped up and topped with yellow, two handfuls of free offerings were thrown directly on top of it.

Because the bottom is very 'uniform' in this swim, I was fishing 2oz back leads on all three rods, fishing very tight to the lead. I feel this tactic used in conjunction with a tightened clutch, helps to aid hooking. All fish caught when using this method have been completely nailed. 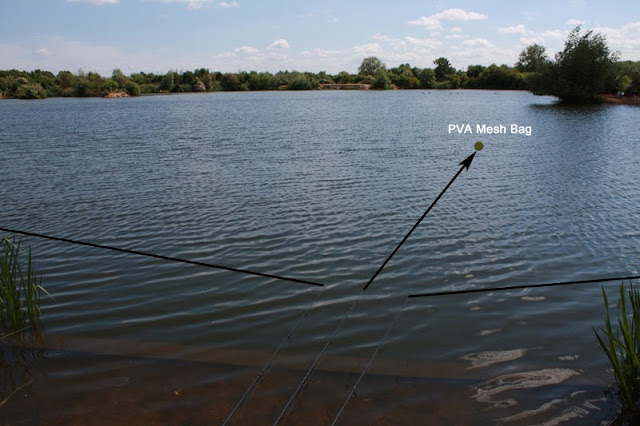 My middle rod was positioned in slightly deeper water, it gradually shelves up into the margin directly underneath my rod tips. My bait was in the deeper part of the channel, because I had two rods covering the margins I thought it would make a nice change to target the open water and during past sessions I have seen a fair few fish show in the centre of the bottleneck.

Since my last blog entry I have done some marker work and I am very surprised to find out that in most of the swims I have fished in, there really isn't much going on in regards to underwater features. Surprisingly it seems to shelve up really close in though.


I personally love marker work, sometimes I will dedicate a good few hours to it on days when I am not actually fishing. In recent years the magazines and on the DVDs, marker work is almost being shunned with the overused term 'thrashing the water to a foam'. This to me is bollocks, you can learn so much finding out about what's going on below the surface. I actually have two marker rods so I can really pinpoint the more subtle features.

Very rarely will I throw it around before casting out at the start of the day, more times than not I'll dedicate half an hour or so after reeling in at the end of a session to check out the movement on the bottom. Without making an effort to understand what's going on in front you, you're really just 'chucking for luck', and for me that isn't fishing. 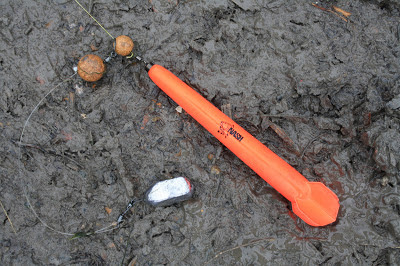 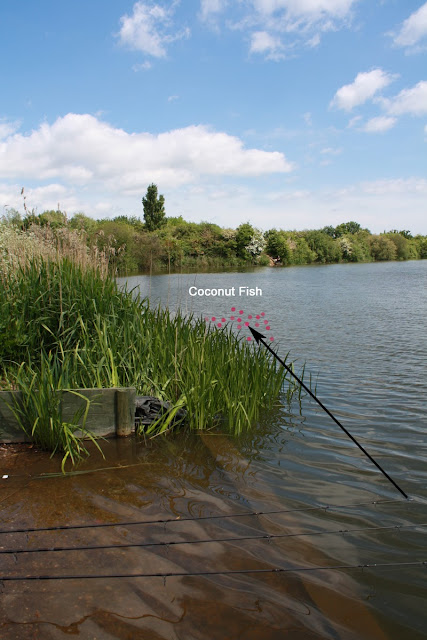 With all three rods now in position I sat back from the waters edge with my eyes firmly set on my rod tips. I had made the decision that I was just going to sit on my hands and wait, I knew the spots produced, it was just a case of seeing if the carp were up for it.

The morning came and went without any positive signs of fish in my area, the buzzers remained static. Midday approached and the temperature was really starting to kick out some heat. Again, it was dead, a few fish were starting to show themselves in the middle of the channel. Come mid afternoon it was baking hot, my confidence level was dropping pretty fast. Then out of the blue my left hand rod arched round and the bite alarm gave out an almighty scream. I rushed up and lent into the fish, line spewed off the spool at a crazy rate and I could feel I was into something heavy.

I really started to give the fish a fair amount of pressure but it wasn't having none of it, it was a good fifteen minutes before I even got a glimpse of it, it was a big fat mirror that was easily pushing twenty pounds. It slowly started to tire and after a good thirty five minutes or so I teased her over the net, scales sunk to 27IB 6oz, I was over the moon to say the least. 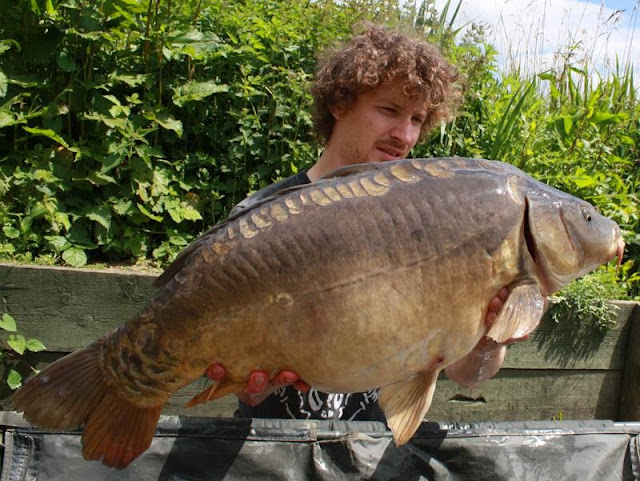 She really was one hell of a fish, she was clean and her mouth was perfect. It still surprises me how close in you can catch and it seems that the better stamp of fish stick pretty close to the reed lines and margins, I personally think, specifically in this lake they tend to shy away from the main features. I got the rod back out on the same spot and topped it back up with a couple of handfuls of boilies.

The hours crawled by and before I knew it evening had arrived and it was time to reel in, nothing else happened, everything stayed quiet with not even a liner. I was more than happy with the result. I kind of made my mind up that I was going to knock the fishing on the head for a while so the fish could spawn, rest and have the chance to adjust back to normal.

We have to respect our quarry and I feel this is very important for the future of the sport and our waters. Going down to the lake when fish are spawning can be as equally exciting as fishing for them. I always use this time of the season to consolidate my results and approach before getting back on the waters after the spawn.
Posted by Charlton Carper at 04:09