In this blog I am going to keep record of my approach, hopefully the end result finishing in my first capture.

Rugby is one of Kingfishers waters, one of their four lakes based down in Snodland, Kent. It's always struck me as one of the slightly trickier waters on the complex and it's taken me two seasons to warm up to the idea of fishing it. It holds some lovely old carp up to around 32IB, possibly bigger, it's a long water, deep in places and has a load of weed, not to mention the fact that there are two trucks in it and a railway track.

After the ice melted I decided to do a couple of days just to start to get a feel for the place, obviously the cold weather has slowed everything down but it was a good chance to start mapping the bottom out, finding features and negotiating the weed beds. Needless to say both session resulted in a blank but I feel I am starting to find my feet with the place and the more homework I can get out the way now certainly puts me in good stride for the coming spring.


Rugby In The Height Of The Summer

Where To Start...? Well the first port of call was up a tree, the low temperatures have made the margins crystal clear and I was amazed at how far I could see down into the water. The first thing that struck me was how uneven the bottom was and the odd shelf I could see seemed to drop away quick into deeper water, there was a fair amount of silk-weed/algae covering a vast percentage of the bottom. There was a very big weed bed quarter of the way out that you could only see from up the tree, behind that was a nice patch of water and then the long set of reeds that stretch the length of the lake. 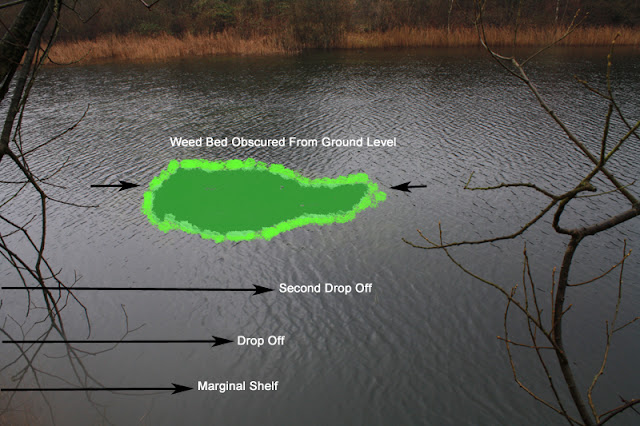 I made up my mind pretty much straight away that I was going to fish on the weed, even though there are a few clear spots there is no guaranteeing you'd hit them on the cast. There is so much natural food living in the weed and I had a gut feeling the carp would feel confident feeding in it. Presentation is a key factor in this situation so I started to think very carefully how I was going to approach it.

First off I took a couple of hours with a marker float and a weed rake just to get a feel for a few areas. I was having trouble finding any real clear spots, it seemed most of the bottom had weed to varying degrees. It was my job to find the spots that weren't as heavy, these would be places I'd be look to get my rig on. 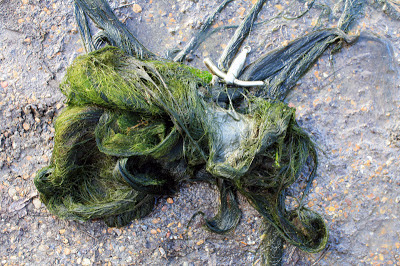 After removing some weed it didn't smell to bad I didn't think it would be that hard to tackle. I was feature finding from a swim called 'The Royal Box', there's a fair few visible features to go at but I was more interested in the features I couldn't see. I was very surprised to find that the depths went down to 15ft and really close into the opposite margin was around 12ft, this was useful because I knew I could get in real close to the reeds and overhanging trees.

Finding The Drop Off 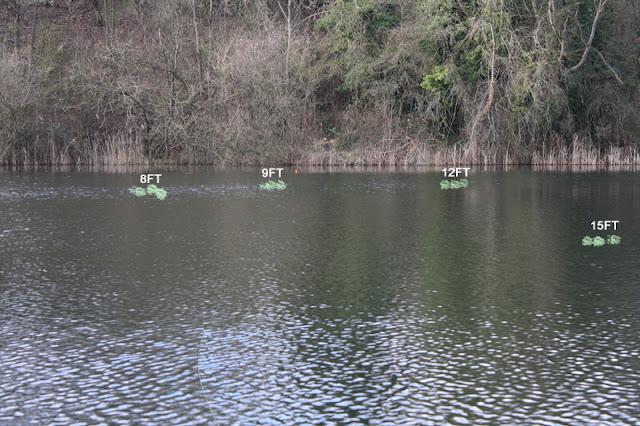 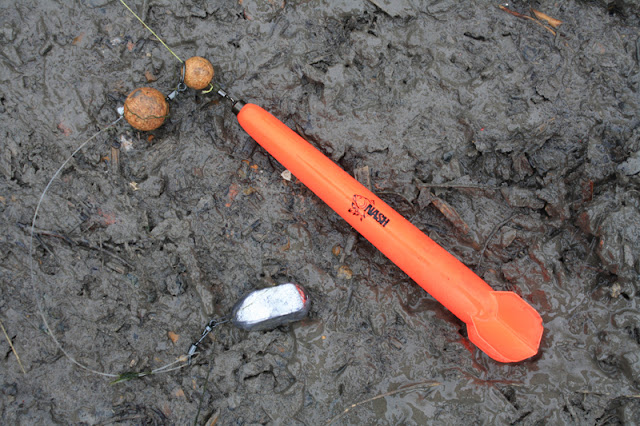 To make my feature finding as detailed as possible I have two marker rods, this really helps with finding shelves and drop offs, it can really paint the 'bigger picture' for you. By this point I had a good feel for both ends of the lake but to be honest I was more intrigued with the middle of the water. I was thinking I might stand a better chance of catching working on the basis that the fish will be making their way along the margins to get to the ends of the lake. After having a bit of a feel about I found a spot that really interested me, there was a small hole a little way off the reed line that dropped from 9FT to 10FT, it wasn't very big but I felt that it could be a great spot to work with. 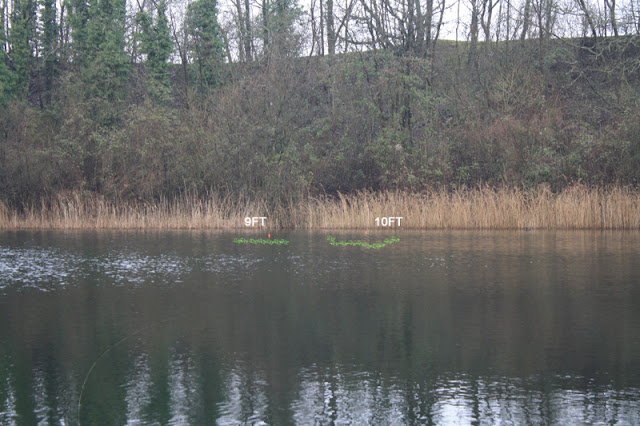 In regards to rigs I have a couple that I use when dealing with weed or silt, I don't really use the Chod, people were catching fish from tricky waters long before it evolved. I like the idea of the 'Naked Chod' but I favor helicopter rigs a lot more. I use a longer supple hook-link material and will fish a pop up at least 3 to 4 inches, I use PVA to manipulate the way the bait comes to rest on the weed. You can now buy rig kits in most tackle shops but I have always made my own from scratch, this way you start to understand all the components and you can modify accordingly.

Components For My Helicopter Rig 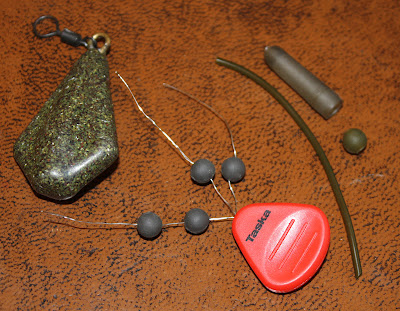 My favoured lead for this setup is made by Carpy Chris, it's called a 'Riser', it weighs 0.75oz. I use the lightest lead possible so it doesn't embed itself to deep into the weed, the shape casts very well and I believe it's less susceptible to getting snagged up and caked in junk.

I use a short length of Carp Craze tubing which is slid onto the mainline along with a Carp Craze rubber bead which is used as a buffer. The helicopter sleeve slides over the swivel of the lead, for my back bead I use a 6mm Taska 'baseline tungsten' bead, this type of bead actually grips to your line and can slide freely if you get a break off, they're a great bit of kit. 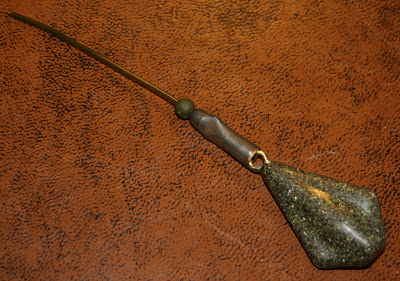 The hook-link is tied to a ring swivel and then slid down the mainline onto the tubing, I have a little 'kicker' pushed over the first part of the hook-link swivel, this naturally kicks the hook-link away from the lead to stop any possible tangles. 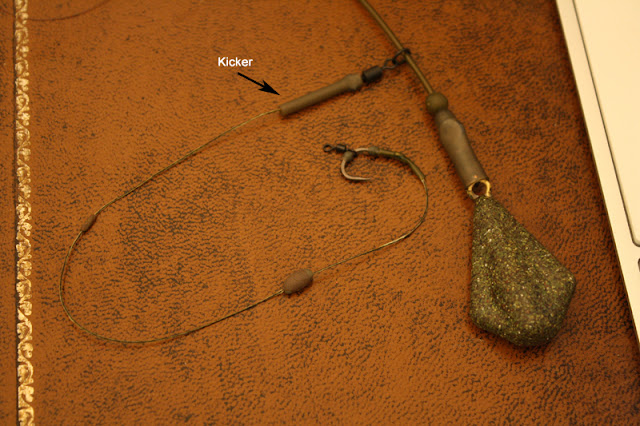 To stop the back bead from sliding to far up the main-line I tie a bit of PVA cord about a foot behind the rig. On the cast I will mask the hook in a PVA nugget, this will elevate the hook bait upwards on the landing. Once the nugget starts to melt it drops the bait very slowly onto the bottom of the lake bed theoretically presenting it perfectly on the debris.  This method has worked for me in the past and I'm convinced it will bag me a fish out of Rugby. 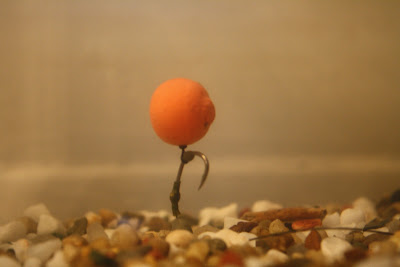 The picture above demonstrates the presentation, obviously it's only popped up slightly, as I mentioned before, for this fishing situation I pop the bait up to at least four inches. I use a micro swivel to attached the pop up to the hook, this gives the bait a lot of free movement and is super adjustable if you want to mess with the bait position on the shank of the hook.

Moving on to my baiting approach, the first couple of sessions I wanted to introduce a fair amount of bait into my chosen swim. Due to the ice having just melted I wasn't expecting any action, the priority was to start introducing feed. I started to think about colors and I came up with the idea of fishing bright bait, sweetcorn, tuna and Starmers 'carp red' method mix, it create a nice layer of color on the lake bed. 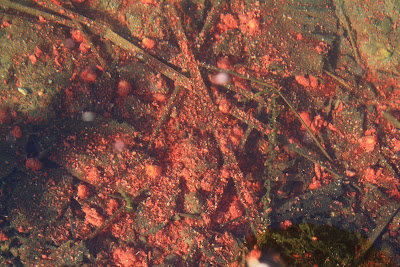 I also decided to start introducing the bait I was planning to fish with. Starmers Banana Cream and Honey Nectar along with low oil Green Lipped Mussel and Strawberry Mivvi pellets. I just wanted the carp to start rooting around on my chosen spots and because I put so much in, it would still be working the swim even when I wasn't there.


A Nice Mixture Of Bait And Color 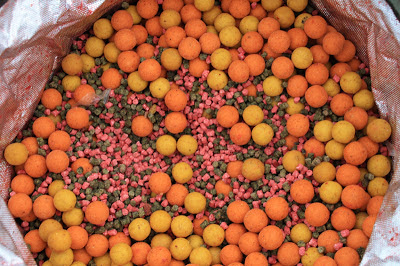 The Mini Spomb, Gets The Job Done 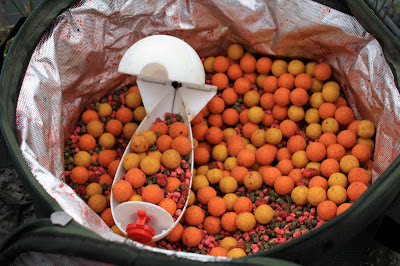 For my first 'proper' session I got down to the lake for around midday, it was cold with a light breeze. I got all three rods out on my chosen spots and decided to pile the bait in, even though it was still cold I was working on the basis that a fair amount of the bait would probably get lost in the weed. I fished slack lines without using back-leads and then sat back to wait, keeping my eyes firmly fixed on the water. 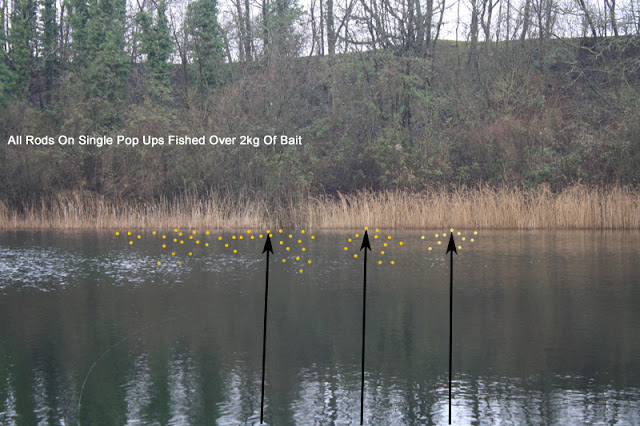 The lake was very quiet, no signs of any feeding fish, I wasn't getting any liners, the hours were passing slowly. Come 3:30pm I was really getting a gut feeling that something could happen, 3:45pm my left hand rod tore off. There was a few seconds delay before it registered to me, I couldn't believe my bite alarm was actually going off. Convinced it was most probably a coot I lifted into it, there was a fair amount of resistance and I could feel the carp ploughing through the weed. When it got in close it kited towards a sunken tree, my heart was in my hands, luckly I managed to keep the pressure on and guide it my way and eventually into the net.

I stood for at least a minute just looking at the fish, I was surprised and so over the moon because I wasn't expecting such a quick result. It really felt like such a massive achievement, I got all my weighing kit together, eased her into my weighing sling, scales sunk to 20IB 4oz, I was shocked, not only did I catch a fish in what can be considered 'hard conditions' I also managed to bag myself my first twenty of 2013. The fish was so clean, perfect lips and lovely winter colors. 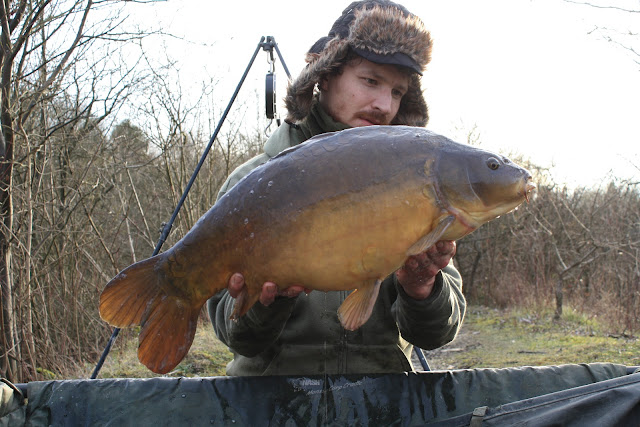 Starting a new water can be a very drawn out affair and can also be very daunting. To me preparation is the key, it pays off to really dig deep and find something to use as a starting block. In modern carp fishing the marker rod is becoming more and more obsolete, especially if you read the angling press. I understand when waters are busy it's not fair to be chucking a marker around, but shooting down to your chosen venue for a few hours when it is empty can really pay off. It gives you a greater understanding of what you a dealing with and from this point you can adjust your approach accordingly. I know there is loads more to find down Rugby and ideally I want to get at least five solid spots going. I am off the starting block and I am looking forward to what my future sessions produce.
Posted by Charlton Carper at 03:40